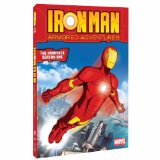 Many of you probably read my review for Iron Man 1994 Animated Adventures on DVD earlier this week. In that review, I told a story of two very different seasons of Iron Man. Well, Iron Man Armored Adventures is even more different because it deals with Tony Stark as a teenager. There is no telling whether this teenage Tony will be like a younger version of the suave and sophisticated playboy or play out like a mechanized version of Peter Parker from the most recent Spectacular Spider-Man show.

Tony Stark isn’t a typical teenage boy. He spends his days coming up with cutting edge technology that is going to help and change the world. His best friend, Rhodey goes to the local school and helps Tony as needed. Howard Stark is Tony’s father and is the head of Stark Industries. However, there are others within Stark Industries that wish to use the inventions for war rather than peace.

One such person is Obadiah Stane, Howard’s right hand man. He wishes to weaponize the Earth Mover technology. But Howard refuses to do it and wishes to keep the technology peaceful. Then one day while Howard and Tony are flying to their next test destination, Howard receives a call from Stane who again asks if the head of Stark Industries would change his mind. Howard refuses and then all of the sudden the plane explodes.

The last image scene is Tony Stark lying on the ground with pieces of the airplane around him. Then we fast forward months and Tony Stark wakes up in a bed. His heart now controlled by a specialized implant which must be recharged at regular intervals. Into the room walks James Rhodes aka Rhodey who tells him to get up and get ready for school. As it turns out, Tony was the only one left alive by the explosion and must carry on with his normal life.

Tony Stark must now try to be a normal boy. He doesn’t inherit Stark Industries until he turns eighteen. Obadiah Stane is the chairman of the board and now oversees all operations. Tony is on the outside looking in and he doesn’t like what he sees. But there isn’t much he can do about it or is there? Kid Stark has been working on a very special exo-suit which enhances his strength, lets him fly and other assorted powers. When he dons the suit, he is simply known as Iron Man.

Tony along with his friends, Rhodey and Pepper Pots fight super hero criminals while keeping his grades in check. But there is a new kid on campus named Gene Khan who is trying to fit in with Tony’s group of friends but has a very dark side when he’s not at the academy. It seems that he is the son of a very powerful leader of a triad criminal organization. Time can only tell if this will spell trouble for the Iron Man.

I’ve been watching super hero cartoons for a while now, and I have come to one obvious conclusion. Most super hero cartoons fail after one or two seasons because they are too busy trying to reinvent the wheel. By this analogy, I mean they spend too much time trying to redo the origin in their image. It’s disturbing how much this relates to Iron Man: Armored Adventures.

Iron Man was not meant to be about some high school kid trying to fit in with other high school students. It’s too cookie cutter and doesn’t really fit his profile. He’s a billionaire playboy, the Marvel version of Bruce Wayne. As I mentioned in the introduction, I was afraid that this would be Peter Parker in an Iron Man suit. For all descriptive purposes, that’s a really good characterization.

On the plus side, there are some good stories here. The show does a fine job of developing the four central characters and fleshing out new villains with very familiar agendas. There are some fun cameos here including the likes of the Hulk, Nick Fury and Black Panther. It keeps the stories fresh and hopefully if this series actually sticks around, we can get more of a flamboyant teenage Tony Stark.

The video is presented in 1.33:1 fullscreen. The look to Armored Adventures is certainly modern, it has some cutting edge animation techniques. It uses computer generated imagery, similar to cel-shading but with a little less resolution and imagery. The color is certainly sharp for the most part but there are screens where it gives the illusion of Iron Man against a completely static background. There just isn’t enough detail to really sell me.

The audio is presented in English 5.1 Dolby Digital. What Armored Adventures lacks in the video portion, it certainly makes up for in audio. It’s loud and expansive and rivals some of the feature film Marvel animation presentations. Dialog is nice and clear and the effects are dialed up to eleven to provide a great sound environment. There aren’t any other network cartoons I can think of off-hand that are any better than this.

As Iron Man 2 moves toward a great summer box office, there will be a ton of kids who will clamor for some animated adventures. A lot of them will turn to Iron Man: Armored Adventures. Most will be lured in by the idea that Tony is a teenager just like millions of other kids. Except it really doesn’t work. It’s certainly far from bad, you could do much worse but it doesn’t feel like Iron Man.

On the plus side, the disc is technically sound sporting some really good video and excellent audio. There are a decent amount of extra especially for those who like sketch work and promo clips. This is good clean fun for kids but I would be more comfortable giving them the 1994 Series or the animated movie that was put out a couple of years ago. Enjoy the movie this summer and do your best to either avoid or Netflix this one (if you are really curious). 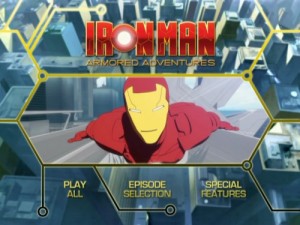 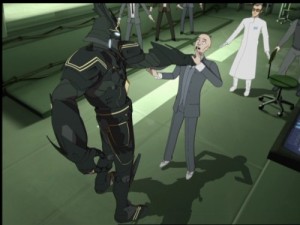 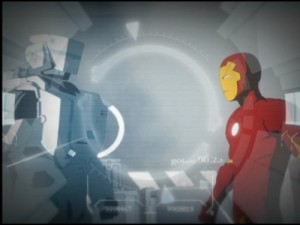 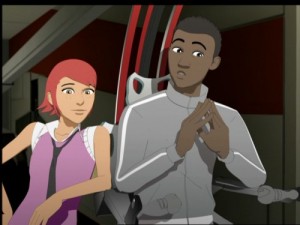 Michael Durr has been reviewing movies for the better part of fifteen years now. He primarily enjoys thrillers, sci-fi, animation and even a little courtroom drama. His favorite films include Escape from New York, the Goonies and anything with Alyssa Milano. When he’s not praising Kurt Russell as the greatest actor of our time or scratching his head over a David Lynch flick, he’s spending time at home in Texas with his lovely wife, Lori and his amazing son. How they put up with him is a mystery, but even Basil Rathbone doesn’t have the time to solve that one.
Contest: Dirty Dancing Limited Keepsake Edition On DVD Giveaway Flicka 2