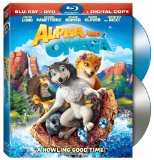 Baby here. Yeah, I’m the German shepherd/chow mix that runs security here at Upcomingdiscs. I also get called upon to help out with the dog movie reviews from time to time. Now, somebody needs to get themselves a good book on proper mammal identification around here. You see, Alpha And Omega is about wolves. I’m a dog. That spells D O G. Look at it this way. That’s God spelled backwards, and that’s no coincidence. If you doubt me, just let me get a couple of seconds with one of the delivery guys. Now wolves are a whole different animal. I know there are nut jobs out there who say that dogs did something called evolving from wolves, but those same guys call you humans a bunch of monkeys. Get my point? And that spells F A N G. Dogs are these nice furry buddies who sleep in your bed on cold nights and eat tissues on your nightstand when you’re not lookin’. Okay, so I get in a little trouble for that last thing. Wolves are wild animals who don’t really do any of those cute snuggly things. If you spell wolf backwards you just get flow, which reminds me of something else I get into trouble for. And that spells B A D. Now Gino says I have to pull my weight around here and write a wolf movie review. Well, I’ll show him who’s boss. I won’t do it, and that’s final.

(ed. note: We’ve had a long talk with Baby and after threatening to take her ball away, I think we’ve come to an understanding.)

Baby back again. Can’t anyone tell when a pup is just jokin’ around? I’m always happy to help out around here, even when no one wants me to. Now, what were we talkin’ about here? Oh yeah. Me. Baby. You can put that ball back where you found it Mr. I’m gettin’ to it. That’s enough about me. Let’s talk about the new computer animated feature from Lionsgate called Alpha And Omega.

Humphrey (Long) is one of those, what you call omega wolves. That means he’s real good at clowning around and making the other wolves laugh. It’s supposed to relieve something called tension in the pack. He’s in love with Kate (Panettiere) who is an alpha. That means she’s gonna be runnin’ the whole show someday. Guess which one is more like me. Anyway, the problem is that Kate’s father Winston (Glover) has promised she’ll marry the son of the Eastern pack’s leader Tony (Hopper). But, you see, Tony’s kid Garth (Carmack) falls in love with omega wolf Lilly (Ricci). It’s kind of a mess because pack law says that alphas and omegas can’t mix. Then a human shoots darts at Kate and Humphrey to make them go to sleep. I don’t need any help going to sleep. It’s what Baby does best. Then they take them far away to another park to live. You see, there aren’t any more wolves at the other park, so the humans are trying to put some there. Now these two wolves have to get back home so Kate can marry Garth and join the two packs. If she doesn’t, there’s going to be trouble. You see, the food animals are starting to disappear, and the two packs have to join together or fight over what’s left. That doesn’t sound like dogs to me. In fact that sounds more like you humans. Anyway, that’s the story and I’m done. Now give me back my ball.

(ed here again: After a quick trip to Petsmart for a sturdy leash and chain, Baby’s once again back to finish her review. Thank you for your patience.)

Okay. Okay. I don’t really know what you want me to say about this movie. I’ve seen a lot of cool animated movies in my job here at Upcomingdiscs. But this one doesn’t quite have the same look or feel that the other ones usually have. The wolves look kind of dumb to me. I know they’re not supposed to look like real wolves. Still, they look more like those werewolves I see Gino watching from time to time, except these werewolves aren’t really scary. Gino says the movie was made on a budget, and it just shows all the way around. The scenery doesn’t look very real to me. There’s a waterfall that looks pretty good, but the rest of the forest looks too much like a cartoon to me. If that’s all they wanted here, they could have just stuck with a traditional cartoon and maybe saved a lot of money. It was all put together in some place called India, so the guys who made the movie couldn’t keep as close an eye on things like I do around here. Well, that about wraps things up around here. Time for me to go do a little business and play with my ball.

(ed here once again: After taking Baby outside to conduct “business” and a few tosses of the stuffed soccer ball, she’s back once again to finish talking about the film.)

There was more? Oh yeah. Gino wanted me to talk about the humans who did the voices for the wolves in the movie. I’m not sure why. You can’t really see them anywhere on the movie. They did get a lot of good people to voice this movie. It looks like they left all of the money in the sound and forgot to save some for the actual movie. Since the voices are recorded years before the movie is finished, you’ll hear Dennis Hopper as the tough pack leader Tony. It’s a shame, but Hopper isn’t with us anymore. Gino says it’s really kind of cool to hear him on the movie even if nothing else really works well. Danny Glover is the leader of the other pack, but his voice doesn’t sound strong here like it usually does. Maybe he had a cold or he’s just letting the age catch up. Humphrey is voiced by the comedian who pretends he’s a Mac computer all of the time on those television commercials. Gino doesn’t like those ads but says that Justin Long is okay. Kate is played by Hayden Panettiere. It’s sure a good thing I don’t have to tell you her name, because it looks like a hard one to say. She was in some science fiction superhero series that Gino used to watch. Something about saving the cheerleader and saving the world. You wanna bet she was the cheerleader? Finally we have Christina Ricci as Lilly.

Alpha And Omega is presented in its original aspect ratio of 1.78:1. The 1080p image is arrived at with an AVC MPEG-4 codec at an average 30-35 mbps. Some people say that dogs can’t see color, but I’m seeing a whole lot of color on this movie. That’s really the best part of the picture. The animation is a little crude for the state of computer animation today, but the colors still stand out, at least they do in high definition.

The movie was in something you humans call DTS-HD Master Audio 5.1. I know you can’t hear stuff as good as dogs can, so you need this extra kind of super sound technology to keep up. Well, don’t go expecting this audio to make you feel like a dog, Dog. But, it does do a good job of making it sound like you’re in the woods even if it doesn’t really look like you are. You can hear waterfalls and branches cracking. There’s music, and it sounds pretty cool. You don’t really hear any sub, however. All of the ranges are in the upper to mid frequencies, just where we dogs like ’em.

All of this stuff is in high definition.

Making Of Alpha And Omega: (20:57) This thing comes in three parts. Gino says it has something to do with not having to pay people to be in it. At least you can use the play-all option and see it all together anyway. One human says that all wolves look alike to him. That might explain why the wolves in this movie all look pretty bad. You get to see a lot of the early drawings and stuff. There’s some recording studio footage where you get to see the voice people in action. I think I might have liked the whole movie better that way.

Wolves In The Wild: (13:10) This is a nice piece on real wolves. Experts tell us how they really act in the wild. I think I recognized one of those wolves. How you been cuz?

Animal Fun Facts: This option brings up animal trivia during the movie. I highly recommend it. It’ll at least make the movie interesting.

Are You An Alpha Or Omega Personality Test: Answer some questions and see which one you are. Guess which one I am.

It’s a lot of good voices; I’ll bet they might not have signed on if they’d have known how it was all going to turn out. You see, they have to do the voices first so they know how to make the mouths move. That means the actors have to take a big chance on the movie when they do their jobs. I’d say these guys ended up disappointed. We’ve seen all of this stuff a hundred times and with better animation. It looks like someone just threw this one together. It only made $25 million at the box office. It was out of most theatres in three weeks. So, if you hadn’t heard of this one until now, now you know why. What was it really like? “I think I tasted the wind, nah, just a bus”.

Baby was a German Shepherd/Chow mix canine reviewer at Upcomingdiscs from 2010 until 2016. She was also chief of security here with her Baby On Board Security side-business. And that spells F A N G S.
Beyond The Prairie: The True Story of Laura Ingalls Wilder Joan Rivers: A Piece of Work