Posted in: Disc Reviews by Gino Sassani on February 8th, 2012 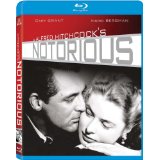 “Gentlemen, I assure you she’s the perfect type for the job. She’s good at making friends with gentlemen, and we want somebody inside his house who has his confidence.”

Say what you will about Alfred Hitchcock, but one thing he never lacked was confidence. Today filmmakers and film fans alike still worship at his altar. His church was the darkened neighborhood cinema, and no one held court better than the man fans affectionately refer to as Hitch. The flicker didn’t come from candles as you might expect in such a place of worship. They emanated from the silver screen. He was canonized as the Master of Suspense, but Hitch was more than that, much more. He was actually quite a romantic at heart. Most of his films are romance stories. But Hitch placed these commonplace romances in uncommon environments. His lovers possessed all of the passion you would expect from a romance film, but their lives were usually in danger…and sometimes there were higher causes. Such is the case in Hitch’s 1946 spy thriller Notorious.

Alicia Huberman (Bergman) is the daughter of a convicted Nazi spy. It’s the end of the second world war, but there are still Nazi elements who have yet to give up the ghost of their super society. Alex Sebastian (Rains) is one such holdover. He’s a wealthy Nazi sympathizer who has banded with others on some secret weapon program. Alicia would be the perfect agent to get close enough to him and take him down, and it’s Devlin’s (Grant) job to get her to take the job. Unfortunately, the two fall in love, and it complicates her mission. The two will have to take chances, and Alicia will have to go all the way to commit to her role. The job will put all of their lives in danger.

While Notorious is not exactly Hitch at his best, it set the tone for many of the spy films that would follow. Quite a few conventions, by now common in the genre, are established in this and other Hitch films of the time. If you think you see more than a few elements of James Bond here, you’re not mistaken. In fact, Ian Fleming pushed to have Hitch direct the first James Bond movie, Dr. No. Who knows how Hollywood history would have changed had he taken the job. One thing is for certain. Bond would likely be very much the way he was portrayed then, because Hitch had already set the examples. It was now for others to follow.

Both Cary Grant and Ingrid Bergman were favorites of Hitch. He would use them both on several occasions. Grant was considered the ladies’ man, but Hitch used him effectively against type. Certainly, he’s the male part of the romance equation here, but he’s neither  suave nor a nice man. It’s no coincidence that the character’s name reads like Devil. All of the leads here were solid performers with renowned resumes already by the time Notorious came along. But Hitch knew how to get chemistry from his leads, and there is no short supply here. None of the characters are particularly good or sympathetic characters, and they were intended to be worse than they finally were. Devlin was originally written far more cold-blooded, and Alicia was originally a hooker. The standards folks pushed Hitch to tame down the romance scenes, which still ended up featuring Hollywood’s longest passionate kiss for decades to come. Claude Rains is actually underused as the “bad” guy here. But he makes the most of the screen time he has.

Hitch had a flair for taking common things and tried stories and turning them on their heads. Anti-Nazi propaganda films were quite common by 1946. But Hitch waited until the war was ending and set his film in the aftermath. He had trouble getting studio support from boardroom executives who believed Nazis had been played out and with the war ending the audiences just weren’t interested in them anymore. Forty years later that would have come as quite a surprise to a certain Indiana Jones. The film so accurately portrayed its McGuffin, a bottle of uranium sand, that J. Edgar Hoover himself questioned the filmmakers on where they got their information and ordered them to tone that part of the film down. I’m sure it just gave Hitch a laugh.

The original script came from a story from Hitch himself, but in the hands of Hecht it became much more than it was originally intended to be. Hecht was a vocal anti-Nazi who held intense hatred for the organization. He fought against anti-Semitism, and the film had to be drastically toned down from its stand. Still, the passion remained, and a rather simple little film became another in a long line of Alfred Hitchcock classics.

It’s a film worthy of study, and studied it has been in film schools the world over. There are the expected masterful shots. One in particular occurs after Alicia is drugged. As she awakes Hitch takes us on one of his trademark spinning tumbles through a character’s somewhat warped reality. Another involves a crane shot that towers over a large party gathering to eventually close in quite vividly on a single key on a critical ring. Sure, these things have been reproduced to the point of cliché. Check out this Blu-ray, however, and relive the day when it was all new and exciting and true to form for one Alfred Hitchcock.

Notorious is presented in its original full frame aspect. The 1080p image is arrived at with an AVC MPEG-4 codec at a rather constant 38 mbps. The film shows some rather impressive signs of restoration. It’s still not perfect by any means, but you’ll find this high-definition presentation will live up to any Hitch fan’s expectations. The sharpness isn’t always on target, but when Hitch wants to draw your attention this presentation draws you in just as the master did himself nearly 70 years ago.

My biggest complaint here is that, once again, there is no root menu. You can only access the extras while the film itself is running. That means selections don’t stay on the screen long, and after each extra you’re returned to the film where you have to start the pop-up menu all over again.

There are two historian audio commentaries, an isolated score and effects track.

The Ultimate Romance: (28:22) The piece includes plenty of filmmakers, historians, professors, and family members to talk about Hitch and Selznick along with other participants and their relationship. The film is covered quite well.

Alfred The Ultimate Spymaster: (13:10) Hitch doesn’t get quite enough credit for his contributions to the spy genre. Here he gets his due.

The American Film Institute Award: (11:32) A look at Hitch’s 1979 lifetime achievement award. It includes great footage of his wife presenting him with the original key from Notorious which Grant swiped from the set and kept 10 years. He gave it to Hitch’s wife, who secretly held on to it for over 20 years. She presented it to Hitch that night.

If you were to ask me to rank this among my favorite Hitch films, it wouldn’t even make the top 5. So why am I talking so positively about the film, and why do I believe you should buy it? I’m not sure Hitch ever made a bad film. There something here for fans of many genre films. You get a spy film. You get a thriller. You get a romance. You get….well… you get Hitch, “a filmmaker who influenced everyone who came after him”.

Gino Sassani is a member of the Southeastern Film Critic's Association (SEFCA). He is a film and television critic based in Tampa, Florida. He's also the Senior Editor here at Upcomingdiscs. Gino started reviewing films in the early 1990's as a segment of his local television show Focus. He's an award-winning recording artist for Omega Records. Gino is currently working on his 8th album Merchants & Mercenaries. Gino took over Upcomingdiscs Dec 1, 2008. He works out of a home theater he calls The Reel World. Favorite films: The Godfather, The Godfather Part II, The Body Snatcher (Val Lewton film with Karloff and Lugosi, not the pod people film), Unforgiven, Gladiator, The Lion King, Jaws, Son Of Frankenstein, The Good, The Bad And The Ugly, and Monsters, Inc.
Texas Killing Fields (Blu-ray) The Doors – Mr. Mojo Risin’: The Story of L.A. Woman (Blu-Ray)