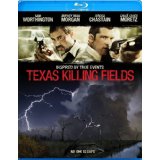 Recent Academy Award nominee Jessica Chastain famously appeared in a whopping six movies released in 2011. These include two Best Picture nominees (The Help, The Tree of Life), and two other movies that briefly generated a small measure of Oscar buzz (Take Shelter for Michael Shannon’s performance, and Coriolanus for Vanessa Redgrave’s work). Unfortunately, when people try to recount Chastain’s outstanding breakout year, Texas Killing Fields is destined to become the sixth movie no one can remember. Heck, it’s not even her best 2011 movie co-starring Sam Worthington. (That would be The Debt.)

Inspired by true events, the film derives its name from an area just outside Texas City where more than 60 dead bodies have been found since 1971. Worthington (Avatar) and Jeffrey Dean Morgan (Watchmen) co-star, respectively, as Texas City homicide detectives Mike Souder and Brian Heigh. Though Souder and Heigh have their hands full trying to solve the Texas City murder of a young girl, Heigh allows himself to be pulled into a case involving another missing girl whose abandoned car was found in the killing fields, despite the fact that it’s out of his jurisdiction. Chastain co-stars as a detective from the neighboring county (and Souder’s ex-wife) while the gifted Chloe Grace Moretz (Kick-Ass, Hugo) plays a troubled Texas City girl who Heigh protects.

Director Ami Canaan Mann certainly attracted a pretty nice cast for her modest true crime thriller, but I can’t help but think it had less to do with the strength of the script (by Donald F. Ferrarone) and more to do with the fact that she is the daughter of legendary filmmaker Michael Mann (Heat, Miami Vice), who is on-board as a producer. Too bad that cast has little to do besides act out a bunch of crime thriller  clichés we’ve seen about a thousand times.

For example, the good cop/bad cop team of Souder and Heigh consists of a haunted, wiser detective (Morgan) and his hot-headed, petulant younger partner (Worthington). I’m only mildly surprised one of them wasn’t black just to push the cliché to its absolute limit. Though they have a few nice moments between them, Morgan mostly looks like he needs a nap, while Worthington mostly acts like he needs to be put in timeout. Out of the main cast, Moretz does the most with the underwritten role of Little  Anne that initially seems so tangential to the main plot, you eventually figure she’s going to be more prominently involved by the end.

Mann has better luck with some of her bit players, particularly Sheryl Lee (Twin Peaks) as Little Anne’s  hot mess of a mother, and with staging a couple of brutally effective set pieces (a home invasion and the film’s bloody climax). Despite showing some promising stylistic flourishes early on (the swooping camera movement that introduces us to the missing girl’s car), Mann mostly abandons these as the story progresses.

Her biggest misstep, in my opinion, was not finding a way to make the killing fields an even bigger, more in-depth character. Instead, it ends up feelings like these killings could have taken place in almost any rural dumping ground and Texas Killing Fields becomes a rote catch-a-killer story with few surprises or excitement.

Texas Killing Fields is presented in its original aspect ratio of 2.4:1. The 1080p image is arrived at with  an AVC MPEG-4 codec at an average of 24 mbps. The video presentation, particularly the panoramic and sweeping views of the killing field landscape, is easily my favorite part of the Blu-ray. Beyond that, the colors on both daytime and nighttime scenes (a large portion of the movie takes place in exterior locations) pop equally well.

The Dolby True HD 7.1 track is a bit of an issue. The dialog was a bit muddled and tough to understand throughout, though that could have more to do with Worthington’s dodgy Texas accent. Also, there’s a disappointing lack of dynamics for a movie that mostly takes place outside (where are my ambient noises). Still, the few instances of gunplay and the movie’s car chase brought a satisfying boom from my speakers.

Audio Commentary from director Ami Canaan Mann and writer Donald F. Ferrarone: Despite the fact that Mann probably overuses the word “incredible” to describe everyone in the cast and crew (even the girl who played a dead body in the killing fields), the duo has a few interesting things to say about the Louisiana filming locations and the real-life inspiration for certain characters and settings.

Though Mann’s devotion to the real life people who inspired her protagonists is admirable, it also makes for a dramatically inert movie watching experience. The Blu-ray doesn’t do much to enhance the experience. I think Mann’s got potential, but right now the best chance this movie has of being remembered is as a footnote in Jessica Chastain’s career if she goes on to accomplish the great things people are expecting from her.