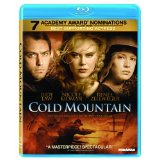 It really does seem like certain movies are created for the sole purpose of winning a boatload of Oscars. I don’t really have a problem with this: I’d personally rather see studios and filmmakers make a shameless grab for prestige than make no attempt at all and revert to their de facto sequel/prequel/reboot mode. The problem is — despite that one clueless, rude person who insists on taking phone calls and texting during the feature presentation, and is somehow always seated directly in front of or behind you — movie-going audiences are more sophisticated than ever. More specifically, moviegoers are hipper to the way movies are sold and presented.

As a result, we usually end up resenting and rejecting these Oscar catnip offerings because who the hell is anyone to tell us what the best movies of the year are going to be before we even see them?! (Please observe a moment of silence for the Oscar prospects of Clint Eastwood’s J. Edgar.)

I’d argue that Cold Mountain was the Oscar catnip movie of 2003. It had three Academy Award-approved names — Jude Law, Nicole Kidman, Renee Zellweger — above the title (not to mention a couple of future Oscar winners in Philip Seymour Hoffman and Natalie Portman in supporting roles), an Oscar-winning filmmaker (the late Anthony Minghella, The English Patient) it came from a respected literary source (Charles Frazier’s 1997 National Book Award-winning novel of the same name), and it was released late in the year so that it would be fresh on Oscar voters’ minds.

Law was nominated for an Oscar for his work as W.P. Inman, a Confederate soldier who is wounded in the waning days of the Civil War. When he receives a desperate letter from Ada Monroe (Nicole Kidman), a woman with whom he shared a brief, passionate courtship in the titular North Carolina town, Inman deserts the army so he can rejoin his love. With Inman gone, Ada eventually becomes lonely and destitute, but gets a major assist from a tomboyish firecracker of a young woman named Ruby Thewes (Zellweger, in her Oscar-winning role).

If anything, Cold Mountain tries to do too much. Most of the movie looks and sounds like a perfectly respectable and stately literary adaptation, but there are also somewhat tonally-jarring moments of violence and sex. The movie also splits its time between being a female-centric survival tale and an Odyssey-style adventure following Inman’s journey home. Once again, I respect a piece of work that, at least, tries to aim high and comes up a bit short of its mark. However, I actually think the contrast between the beauty of the scenery (Romania mostly stands in as the American South) and certain instances of brutality worked well to illustrate what fighting on both sides of these expansive fields must have been like. On the other hand, I found Inman’s adventures to be much more engaging than Ada’s plight…at least until Zellweger enters the movie like a tornado.

Zellweger is so over-the-top that she mostly seems to be acting in a different movie, but I think her polarizing performance is precisely the kick in the butt this movie needed to help it transcend (if only a little) its status as “Standard Oscar Fare.” Law says infinitely more with his eyes — conveying fear, weariness and anxiety — than he does with his words, which is fine because his Southern accent wasn’t exactly top-notch. Kidman, with her porcelain features, is suitably out-of-place as Ada — who is a prim fish-out-of-water when she arrives at Cold Mountain — but I didn’t totally buy her transition into more of a survivor. (I get the feeling she’d be in major trouble if Ruby stopped coming around.)

Cold Mountain also boasts an impressive supporting cast — including standout turns from Portman, a colorful Hoffman, a menacing Ray Winstone (is there any other kind?) and a goat-loving survivalist played by Eileen Atkins — memorable music (including a pair of Oscar-nominated tunes from the likes of Sting, T. Bone Burnett and Elvis Costello) and sumptuous cinematography by John Seale, another Oscar nominee for his work here.

Cold Mountain is presented in its original aspect ratio of 2.35:1. The 1080p image is arrived at with an AVC MPEG-4 codec at an average of 26 mbps. I happen to own the DVD version of the movie and, after a side-by-side comparison, can happily report the Blu-ray absolutely offers a consistently shaper overall image. The mud and blood of the opening Siege of Petersburg popped off the screen just as vividly as the snowy climax. Unfortunately, there were a few instances when the image would appear blurry. (Usually in medium shots of actors’ faces.) The scenery, however, looked consistently fantastic.

The DTS-HD Master Audio 5.1 track is the star of the movie for tech heads. The (arguably) intrusive score comes through wonderfully, as do the handful of bluegrass/folk songs performed in the film. There are also nice dynamics present in battle scenes, with explosions serving as pulsating background noise when they’re off in a distance and booming through your speakers when Inman is in the thick of battle. Thankfully, the sound quality of the dialogue is properly modified, but never sacrificed.

My main problem with the Cold Mountain Blu-ray is that it simply recycles every bonus feature from the earlier DVD release. (Which means they’re also presented in standard definition.) Even though the existing features are unbelievably comprehensive, I would’ve liked to have seen at least a shred of new material.

Audio Commentary by director Anthony Minghella and editor Walter Murch: Considering that Minghella died in 2008, the fact that there’s no new commentary track is obviously forgivable. Minghella and Murch speak engagingly and matter-of-factly about their stylistic choices and some of the cuts they had to make. This track kind of made me wish for more commentaries between directors and editors.

Climbing Cold Mountain Documentary: (1:14:06) This doc represents a completely immersive filmmaking experience — from scouting locations and rehearsals to post production and the movie’s premiere — it includes all the major (and some minor) players in the cast and crew. For Cold Mountain superfans only! (Also, recommended viewing for any movie nerd interested in seeing how a large-scale production comes together.)

Deleted Scenes: (20:59) This batch of 11 deleted scenes mostly deepens the relationship between Ada and Ruby, shows a bit more of Inman at war and spotlights the supporting players (especially Winstone). Inessential, but worth a look.

The Words and Music of Cold Mountain — Royce Hall Special (1:33:06) An all-encompassing celebration of Frazier’s novel, Minghella’s script and the music in the film. Features musical performances by Alison Krauss, Jack White and Sting, dramatic readings of the novel — by cast members Brendan Gleeson and Kathy Baker — and of the screenplay by Law and Kidman, as well as a chat between Minghella and film critic/historian David Thompson. Strongly recommended if you like bluegrass music, Frazier’s novel and seeing Law and Kidman play their Civil War-era characters in contemporary clothes.

A Journey to Cold Mountain: (29:41) A more traditional making-of-documentary with talking head interviews interspersed with clips of the film. This is for people who would like to know more about Cold Mountain, but don’t have more than an hour of their time to spare.

Sacred Harp History: (4:09) Tim Eriksen (Gleeson’s singing voice in the film) guides us through a quick look at the movie’s Southern choral music, including songs that were published in 1844.

I believe there are a ton of things to admire about Cold Mountain, but not as many to love. The complete lack of new bonus materials is a real downer. However, if you already own “Cold Mountain” on DVD, I’d recommend (but not demand) that you upgrade to the Blu-ray for the improved sights and sounds.