Posted in: Disc Reviews by William O'Donnell on February 19th, 2012 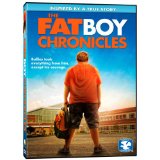 Jimmy is a clinically overweight teen who is starting high school. He is immediately the target for relentless bullying but tries ignoring his classmates’ tormenting by focusing his attention on losing weight and trying to win over a girl he fancies in his classroom.

Based on a novel by Diane Lang and Michael Buchanan, this is a serviceable lesson about how children can attempt to keep a positive attitude despite facing all sorts of adversities. Said adversities Jimmy faces start as typical bullying, which is portrayed in this film in a realistic fashion, and escalates to extremely serious issues regarding his best friend, whom is facing even greater challenges living in a broken home with an alcoholic father.

The characters are beyond just archetypes such as the common, sympathetic protagonist, misunderstood but cute girl, goofy buddy, and meat-head antagonists. The performances from the lead and supporting cast are solid and help to liven our interest in the characters’ conflicts instead of becoming bored by seeing them simply go through the motions.

There is a strange subplot where Jimmy and his best friend attempt to fish out a child murderer by using Myspace. Said subplot places an interesting spin on the bullying theme because Jimmy is using his sister as a part of this scheme and embarrasses her in the process. Jimmy, and us through Jimmy, learn about bullying by seeing him as a victim as well as acting out as a bully himself.

There is a slight Christian angle to this film but it is not of the preachy sort that makes it unrelatable to those outside of the religion. It is simply a part of the characters’ lives and a device used for Jimmy to nervously ask out his crush.

As mentioned before, there are some extremely serious issues being dealt with. The DVD packaging advertises the film as “Family Approved,” but parents out there should be warned that there are mentions and/or depictions of self-mutilation, drinking, and abuse both verbal and physical (coming from adults and children). I fully advocate parents showing this film to their kids because it deals with such heavy subjects and does not shy away when the situation is uncomfortable to witness. The main characters experience great pain and have to endure by finding strength within, instead of being saved by some external scapegoat, deus ex machina, or fantasy wish fulfillment like other “family films might. With that in mind, if parents do choose to show this to their children, they should be prepared to discuss it so that there are no misunderstandings. The issues in this film are important but could be shocking to sensitive viewers.

Widescreen 1.85:1. HD TVs frequently reveal any flaws a DVD presentation may contain that a Blu Ray would have possibly mended, or a lesser television may have masked. The picture quality is not the crispest on this film but, even on an HD TV, it does not look too bad. The film’s lower budget means that darker scenes can be a little bit cloudy, and there is nothing too fancy happening when the director tries to be stylish with the visuals (such as a bloom when Jimmy wakes up in a haze to the sounds of his best friend in a fight).

English Dolby Digital 2.0 Stereo. It’s a shame that this isn’t offered in Surround but the sound is still nicely presented. The dialogue and music are clear and mixed well together.

I feel obligated to mention how frustrating the menu is to navigate, and there isn’t another section that is more appropriate. There should be more Play All options for the bonus interviews and the main menu should be easier to return to without cycling through all scenes etc.

Cast Interviews: Essentially trailers for the film where the central cast make basic, descriptive comments about their characters and their relationship to the story. Five interviews/trailers in total.

Commentary by the Director and the Authors of the Novel: A nice dynamic having the Director speak about the production of the film while having the novel’s writer’s offer their reactions to seeing the result of the adaptation from one medium to another.

Bullying Prevention Info: A DVD rom bonus that is available if you place the disc into your computer. This is a very nice, appropriate companion to this film.

This film doesn’t reinvent the wheel with its storytelling, but it does make for a nice lesson in understanding what it means to struggle as a teenager in the face of bullying, be it from classmates, family or even adults. More life lessons than entertainment, to be used to instigate conversations with young people, not for relaxing with a bowl of popcorn in hand.