Posted in: Disc Reviews by David Annandale on February 24th, 2012 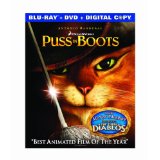 One of the more popular characters from the Shrek franchise steps into the starring spotlight here, in an adventure whose locale is rather different from the familiar swamp-forest-castle fairy-tale settings of the parent films. Seeking to steel magic beans from the husband-and-wife thugs Jack and Jill, Puss (Antonio Banderas) and rival Kitty Softpaws (Salma Hayek) become caught up in a wild scheme masterminded by the duplicitous Humpty Dumpty (Zach Galifianakis).

The plot is really more of a premise, serving as the means to set up a grab bag of set pieces (an extended flashback showing Puss and Humpty’s past, and how the latter betrayed the former; the spectacular sprouting of the beanstalk; the dance-off between Puss and Kitty and the Glitter Box). There is a lot going on here, and the jokes come a fast clip. Younger viewers will likely get the most out of this, but there are plenty of bones thrown to the adults in the crowd, including such touches as the in-joke casting of Banderas and Hayek bringing in a whiff of Desperado to the antics. The animation is stunning, and while I can’t speak to the 3D theatrical incarnation of the film, it looks simply stunning in 2D.

However, a plethora of gags and great aesthetic care are not enough. Remember what a blast of fresh air the original Shrek was as it riotously skewered the whitebread sentimentality and industrial production of the Disney school of fairy tales? But then the parody became a franchise, and now it has a spin-off, and we are now in a situation where the films have become the very thing they were mocking in the first place.

Though there are strong moments here, there are all sorts of things that don’t quite gel. One of the biggest problems, I found, was an uncertainty of tone as far as the fictional world goes. The Shrek films base themselves in a very recognizable fairy-tale environment, which is then tweaked and twisted (most successfully in the first entry). But Puss In Boots appears to be trying to fuse Shrek-land with Pirates of the Caribbean and Spaghetti Westerns. The result feels like a patchwork, first one thing, then the other. This isn’t a coherent fictional world: it’s a series of backdrops for visual gags.

And these gags are hardly knee-slappers. For every genuinely amusing punchline, there are three of four telegraphed, predictable groaners. Puss himself, meanwhile, is something of a one-joke figure (He’s macho! But he’s a cat!). He’s fun as a supporting character, but a bit tiresome as a leading man.

A technically impressive exercise, then, but an underwhelming movie.

That impressive technique is, of course, the visual, and boy does that virtuosity show up here. To choose just one example, in an early scene, Puss literally gives a bar thug a close shave with his sword. Puss swipes with his sword, and we cut to a reverse shot of the bar. As Puss speaks, a faint cloud of whiskers drops into frame. It’s a nice touch, and though it is one that was clearly designed to pump up the 3D effect, it is plenty spectacular in this incarnation, and the transfer make every detail clearly visible. Though I’ve gone on elsewhere about how the definition of Blu-ray is such that it can actually work against the artistic intent of the movie, the computer-animated feature is a case where the form and the medium are in perfect synergy.

The colours are sumptuous, and though the film has plenty of surprisingly dark, moodily lit scenes, the clarity remains untroubled throughout. The perfect treatment of the blacks helps here, of course, in maintaining a striking, pleasing contrast. The AVC codec hangs out at a silky-smooth 25-30 Mbps, and the aspect ratio is the original 2.35:1 anamorphic widescreen.

This is a film that is very much about the eye candy, but the audio is not lacking, and more than does its job to back up the pretty pictures. The music is properly enveloping, as are the environmental effects. Music is pretty important here (witness the pseudo-Morricone during the Glitter Bar sequence), and the mix is warm and inviting. The placement of the sound effects is strong, too. Overall, though, the sound doesn’t quite have the knock-out punch of something like Transformers: Dark of the Moon. It is perfectly clear and perfectly effective, but it isn’t a wow in the same way that the visuals are.

Animator’s Corner: This is the equivalent of a commentary track, but comes in the form of a PIP, and features comments from a wide range of talent, including the animation team and the likes of Banderas himself. The images here are the usual range of talking heads, but also feature plenty of storyboard sequences, which, when playing against the finished scene, are pretty interesting in and of themselves.

Pop-Up Trivia: The usual collection of bits and bobs of just about everything in bite-sized nuggets. It can’t play at the same time as the Animator’s Corner.

Purr-fect Pairing: The Voices Behind the Legends: (9:21) A fairly self-explanatory featurette, focusing on the vocal talent.

Deleted Scenes: (7:27) Deleted scenes in an animated film are a slightly different animal, in that these were never completed. So there are three of them here in animated storyboard form.

Kitten to Cat: The Progression of Puss In Boots: (12:01) Not the progression of the film itself, but the development of the character from film to film.

Glitter Box Dance Off!: (5:11) The choreographer of that sequence and the dancers who were motion-captured demonstrate the steps.

Klepto Kitty: (3:42) A short piece about a real cat who has been stealing everything in its neighbourhood that isn’t actually nailed to the ground.

Puss In Boots: The Three Diablos: (13:05) A new animated short, firmly situated in a western setting (which still feels odd when a castle shows up). Puss is up against three lethal but cute kittens (think Garfield vs Nermal). Not perfect, but fun, and perhaps this is the form the feature itself should have taken.

World of DreamWorks Animation: Songs from and trailers for the studio’s other animated efforts.

These last three are games. Select elements to have a nonsense rhyme constructed, use the remote to move cross-hairs over lights, and spot the differences. These might amuse the wee ones for a bit, but I can’t imagine that being for more than a few minutes.

A pretty complete package. If you like the film, then by all means pick this up. But the film itself is a case of the extremely well-crafted execution of an indifferent script.