Posted in: Disc Reviews by Brent Lorentson on March 26th, 2012 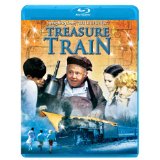 Released back in 1982, Treasure Train tries to capture the imagination of kids as Disney had for years but with a much smaller budget.  Helmed by surrealist artist and director Fernano Arrabal, he crafts a film heavy on the power of a child’s imagination and sense of adventure. To be fair I had to give this movie a second viewing not because I liked it but because it was so weird I had to make sure what I saw was real.

The film opens with a beautiful overhead shot of a train barreling down the tracks.  As the credits begin to roll the beautiful footage dissolves from the real train to a model train that is steaming ahead to collide with another train. As the toy falls to the ground a frustrated man scoops up the train only to yell at the children.  This scene though on the surface is simple but represents what the film is about.  Every child while growing up is excited about the prospect of being older and how great it all must be but the reality is never is as good as it was supposed to be.

The two children are Toby and Liz, Toby is the over imaginative adventurous spirit and Liz for the most part is grounded in reality.  Throughout the film we are given glimpses into Toby’s head as he dreams about adventures ranging from being a racecar driver, a fire chief, spaceman, and the list goes on.  Toby is the most likeable character in the film but the dream sequences are over done.  (I stopped counting after 6)

As the film progresses the children meet a new foster child Hoang that has recently escaped from Cambodia.  The children are excited to meet him and are ready to whisk him off into an adventure.  Hoang’s escape from Cambodia is more adventure than anything Toby could imagine.  Seeing flashbacks of Hoang’s journey he encounters pirates kidnapping children, his father being taken away to a concentration camp, and saying farewell to his mother while gun fire rings out around him.  Seriously this kid needs a nap and some therapy not an adventure.

While the kids explore the woods they discover an abandon locomotive.  Is it real or imaginative is up for the viewer to decide since the train does strangely resemble the one the children were yelled at for playing with before.  If finding a train wasn’t enough the kids also find a crazy hobo in the woods that claims to be the Emperor of Peru (Mickey Rooney).  The kids automatically are taken with the Emperor who claims to be a train conductor and fills their heads with ideas of running away on the train for adventure across the world.  Rooney’s performance here is all over the place, it seems as though he was given free rein to adlib some of the most random lines of dialogue you will ever hear.

Together the children decide the destination for their first adventure will be going to Cambodia to reunite Hoang with his mother.  This seems sweet at first till Hoang explains he wants to rescue his mother so he can marry her.  This seems weird to me only because the following scene is Liz teaching Hoang how to kiss his mother.

When it comes time to set off for Cambodia the Emperor decides he can’t go along for their adventure and that the kids must go on alone.  The film simply ends with the train moving along the tracks and cutting to the images we first saw in the opening of the film.  What I find frustrating is that we are left with nothing resolved.  What would normally be the end for the first act of a film turns out to be the end of the film that poses more unanswered questions.

There is so much going on in this film and at times it feels like the director threw out the script and simply asked the kids what they think should happen next.  This film tries so hard to ask the audience to let go and escape into their own fantasies and in many ways that is what I enjoyed most about this film.  These days not enough films take the risks this film does when pandering to kids.  If this were to be released in theaters now I can only imagine how parents would react to certain topics broached along the way.  But the strength of the film remains with the message about dreaming and retaining the sense of adventure.  These days kids spend their time in front of video games or the internet and in some ways are not allowed to go off and have adventures as kids could have in the past.  Is this a reflection of the world today or simply my way of seeing things as a so called adult now?

Treasure Train is presented in its original aspect ratio of 1.66:1 and is enhanced for widescreen television screens. The 1080p high definition image is arrived at through an AVC/MPEG-4 codec with an average bit rate of 25 mbps. The age and obsurity of the film work against this presentation. There is a ton of dirt and spec marks on the image. The colors are soft and often appear to be completely washed out. Contrast suffers from an over-brightness to the image. Black levels are also below average here. This is strictly an archive presentation.

The DTS-HD Master Audio 2.0 is a serviceable enough audio presentation. Between some bad dubbing and lack of bass the audio really takes you out of the experience here.  The music is about the only thing that comes through nicely.  There is as also a French track but contains the same issues with the dubbing.

Interview with Mickey Rooney:  This is a short interview done for the release of the film that has Rooney looking back at the film.

This is something I don’t really see a lot of adults enjoying but possibly their young kids will.  Though with the special effects heavy films that saturate the market I believe kids may find this a bit dull.  The movie does have some charm to it but it gets weird and uncomfortable at times.

Brent Lorentson is a horror writer and film critic based out of Tampa, Florida. With a BA in Digital Film, he co-wrote and co-directed Scavenger Hunt. His short stories have appeared in various horror anthologies. In 2019 his short script Fertile Blood will be a part of the anthology horror film Slumber Party. He is currently working on his first novel A Dark and Secret Place set to be released in late 2019. Favorite Films: Taxi Driver, Fight Club, I Saw the Devil, The Wild Bunch, Dawn of the Dead, A Clockwork Orange, Pulp Fiction, Heathers, The Monster Squad, and High Fidelity.
Wizards (35th Anniversary Edition) (Blu-ray) Tom and Jerry: In the Dog House