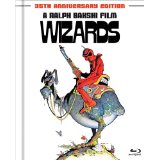 Ralph Bakshi is probably best known for his x-rated animated adaptation of R. Crumb’s Fritz the Cat, the first animated film to receive an x-rating from the Motion Picture Association of America and still turn into the most successful independent animated feature of all time. When his second and also x-rated animated feature, Heavy Traffic, a blacker than coal satirical comedy, became a hit (theaters were willing to take a chance on the x-rating due to the success of Fritz), Bakshi became the first person in the animation industry since Walt Disney to have two financially successful movies released consecutively.

At this point Bakshi had developed the reputation as the Anti-Disney. His obvious love/hate relationship with The Mouse’s animated classics drove him to both mimic and blaspheme Disney’s style. Bakshi tried to convey honesty in art, even if it brought the world down on him.

In his next film he took on racism and did it in blackface with Coonskin. In spite of a top notch African American cast and hiring the first black animators, Coonskin was met with a wave of short-sided criticism that didn’t understand the point of the film. Although eventually garnering positive criticism from Coonskin never recovered from the accusations of racism. Deciding to move away from adult animation and tell a family friendly PG-rated movie, Bakshi came up with Wizard Wars, which was eventually trimmed to just Wizards at his friend George Lucas’ request so it wouldn’t be confused a little film he was working on at the time named Star Wars.

Wizards may not Ralph Bakshi’s best work, but it is still an animation milestone. The gritty storyline, the voluptuous fairies, the bleak war scenes, pointed criticism at the ineffectuality of the church in times of trouble and the general 1970’s stoner sensibility which prevails in this visionary piece of cinema, assured the world there will never be another film like it. Just the Nazi scenes alone with the predominant swastikas would never fly in this age of political correctness.

The story takes place in a post-apocalyptic world where the downfall of mankind has engineered a rebirth of magic. A fairy race thrives and from it are born two great wizard twins, Avatar (Bob Holt) and Black Wolf (Steve Gravers). A war rises between the brothers when Blackwolf kills their mother. Avatar, the more powerful of the two, banishes his brother to the wastelands to live among the damned. One there, Blackwolf digs up all manner of ancient, WWII-era technology—tanks, bombers, machine guns and, using one of Hitler’s propaganda films found among the ruins, inspires the mutant hellspawn to rebuild the war machines and attack the good fairy folk. Assisted by the beautiful and perpetually giggly Eleanor of Montagar (Jesse Welles), the dour warrior elf Weehawk (Richard Romanus) and fan favorite assassin turned freedom fighter, Peace (David Proval), Avatar must face and defeat Blackwolf’s dimwitted minions before all is lost.

Wizards‘ 1080p/AVC-encoded transfer in the anamorphic aspect ratio of 1.85:1 runs an average of 30Mbps. Due the fact that Ralph Bakshi’s relatively small fanbase could not support a meticulous frame-by-frame restoration, unlike Disney classics which are miraculously revived in high definition glory, the source print is nicked, scratched, and frequently salted and peppered with white and black specks. There are a great amount of anomalies or defects from the original animation, including occasional flicker, fluctuating colors, objects in the foreground going unintentionally from opaque to semi-transparent allowing the backgrounds to bleed through, and some very, very rough stock footage composite shots which play off incredibly grainy and harsh bring down the overall video quality. Still this is an incredibly leap forward from past transfers. Black levels are stable and contrasts look sharp.

This is a very low budgeted independent film, but beyond budget constraints, there are major flaws with the movie. First and foremost is the languid and restrained pacing; there are too many storyboard montages, although the art in them is lovely; the frequent cuts to stock footage, live action, rotoscope animation detract from the epic nature of the story; some of the acting is flat and uninspired; but perhaps the most damning flaw is that the lead character, Avatar, is such a doddering buffoon and almost unlikable. However, if you are a fan of American animation and original storytelling with no political correct overtones, you really should do yourself a favor and check out Wizards.

“Allright, creep, Now before I untie you, I wanna tell you a couple of things, and I want you to listen, and listen carefully. This has been the biggest bummer of a trip I’ve ever been on; but if you let me down, or you hurt my friends, especially the broad, I got stuff planned for you that’ll take twenty years to kill ya.”