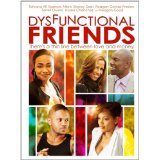 Nine college friends are reunited by the death of a beloved former classmate. While attending his funeral, they learn their wealthy friend has left behind a will stipulating that each of them will receive a big chunk of his fortune if they can stay at his mansion for five days without a single person leaving. So basically, this terrible movie is an unholy mash-up of The Big Chill and The House on Haunted Hill. Come to think of it, I would’ve liked this flick a lot more if everyone had been murdered by ghosts.

That’s because pretty much every character in Dysfunctional Friends — the early frontrunner for the 2012 Just Go With It award for Laziest Movie Title — is completely unbearable. (This, despite the fact that notorious NFL malcontent Terrell Owens isn’t even playing himself!) I know this group of estranged “friends” is supposed to be self-centered, but it’s impossible for the audience to get invested when we simply can’t stand any of them.

For example, one of the romantic heroes in writer-director Corey Grant’s ensemble is supposed to be Aaron (Datari Turner), a writer (naturally) pursuing his college sweetheart Lisa (Stacey Dash from Clueless), who is currently engaged to professional athlete Jackson (Owens, stretching his acting muscles by playing a basketball player). The only problem is that Aaron appears to be a serial cheater whose last girlfriend caught him in bed with another woman. And we’re supposed to be rooting for this guy?! At least this rivalry gave Owens — whose acting is as embarrassing and unintentionally funny as you’d expect whenever he has to show any emotion — the chance to deliver the line, “Your ex is doing jaw exercises on my balls.” Stay classy, T.O.

I really should stop picking on Owens because it’s not his fault this movie stinks: I’m pretty confident Dysfunctional Friends would’ve been a mess even if a real actor had been cast to play his role. Both the acting and writing are forced and stilted across the board, though I suppose Grant’s attempts at humor fare slightly better than his stabs at drama. In a clear shout-out to the Julia Roberts twist in Ocean’s Twelve (ok, probably not), one character says “Anyone ever tell you, you look like Meagan Good?” to the will executor played by Meagan Good. I’m fairly confident no one anywhere has ever said the words “Anyone ever tell you, you look like Meagan Good?”, but this is what passes for humor in this movie. Well, that and a lot of yelling.

The story’s boiling point comes at around the 100-minute mark during one of those tense dinner party scenes where nobody actually eats because they’re too busy airing their grievances. (The movie clocks in at 111 exhausting minutes.) Unfortunately, the sequence is poorly staged and, more importantly, we’re way past caring what happens to any of these wishy-washy, despicable people. Grant even blows an admirably bittersweet ending by tacking on a painfully ridiculous epilogue that ties everything up in a nice bow.

You’ve probably guessed this by now, but I simply cannot recommend this movie. The only saving graces in Dysfunctional Friends are Weaver, the funny “Introducing Terrell Owens” credit at the start of the movie, Stacy Keibler in jogging outfits, and the fact that it’s now possible to connect Owens to Kevin Bacon next time you’re playing “Six Degrees of Kevin Bacon.” (Owens was in Dysfunctional Friends with Keibler, Keibler was in bed with George Clooney, Clooney was in Ocean’s Eleven with Brad Pitt, and Pitt was in Sleepers with…Kevin Bacon. See? It works!)