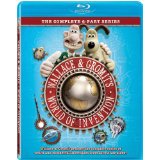 Wallace and Gromit is the brainchild of animator Nick Park. The British filmmaker tried for years to bring his clay creations alive, but on his own finished a mere 10 minutes in a little over two years. When he met up with Aardman Animations, he was teamed up with the creative talents he needed to make his dream come alive, and come alive these two characters did indeed. They’ve become an overnight sensation in the UK and now all over the world. I was introduced to the characters with the full length feature Wallace And Gromit In The Curse Of The Were-Rabbit.

I have to admit that I was completely won over by the magic of this creation. It’s so simple-looking that it almost appears to be child’s play. The truth could not be further from the perception. Stop-motion animation goes back to the beginning of the cinema itself. Pioneered by the genius Willis O’Brian and perfected by Ray Harryhausen, it is one of the most painstakingly tedious tasks in the film industry today. It has been all but abandoned except for a select few who still follow in the footsteps of greatness. Give Nick Park credit for keeping the art alive and making it look effortless.

Wallace is an inventor. His home is overflowing with various devices that have become a part of his daily routine. He has an automatic system for waking up and dressing him. He has automatic food dispensers. If there’s an overly complicated way to do something, Wallace has figured it out. Wallace is particularly fond of cheese. His dog, Gromit, might not say a word, but he’s the smart one in the family. He bores of Wallace’s devices and ideas and often ends up getting him out of trouble in the end. Their world is completely stop motion with most of the objects made out of clay just like the Claymation days of old. Over the last decade or so there haven’t been a lot of adventures for the duo, but they have certainly appeared on many products from toothpaste holders to underwear.

So what is the duo up to now? They’ve done a BBC television series called World Of Invention. The show combines short bits with the stop-motion characters with real clips of various inventions and technologies around the world. Real folks deliver some rather entertaining and educational shorts. There’s even a little Mythbusters stuff going on as the team attempt to reproduce some crazy ideas to see if they could really work out. There’s n Inventor Of The Week, Curiosity Corner which usually features some odd technology and a Contraption Countdown that explores six wacky inventions that go with that week’s theme. Wallace and Gromit deliver it all from their home television studio powered by elephant gas.

The Blu-ray release comes with six episodes which are about 30 minutes each:

“Mother Nature is the best inventor of all.”

This episode examines ideas that are taken from observing the natural world. They include a flying machine and grabber both taken by observing manta rays. There are robots that get their energies from eating actual flies.

Reach For The Sky:

“When it comes to inventions, the sky’s the limit.”

These ideas have to do with flying. There are homemade rockets that are fueled by recycled tires. There are jet packs and a skin-tight space suit that it is hoped will replace the bulky environment suits worn by astronauts for the last 60 years.

“Meet machines that take the hassle out of housework.”

These ideas help around the house and include a fridge designed by Albert Einstein. Household robots are shown. A 14-year-old boy brought electricity to his village by constructing a windmill out of parts he found lying about.

Come To Your Senses:

“Seeing is believing, isn’t it?”

These inventions have to do with our senses. There’s a plastic “lollipop” contraption that allows blind people to see images with their tongues. Meet bees that have been trained to sniff for explosives. There are even invisibility cloaks being designed. Move over Harry Potter.

“The show that puts the knowledge in technology.”

These inventions deal with keeping people safe. You get a history of the ejector seat. More on spacesuits is offered here.

“There are so many ways to get from A to B.”

Here are some of the more imaginative methods of transportation. Watch flying saucers powered by lasers. Electric cars and homemade submarines are included here. There’s a rail system that was intended to run on air.

Each episode is offered in its original aspect ratio of 1.78:1. The 1080i image brought to you through a solid AVC/MPEG-4 codec. The colors are often bright and cartoony just as they were intended to be. There isn’t a heck of a lot of contrast in this material, and lighting appears almost too consistent. The best example of the high definition is that you can see all of the fingerprints in the clay. They’re often so clear I think you could do a screen capture and run them through AFIS. Tell Grissom we’ll have those prints ID’d in no time at all. The footage varies, as some of it is quite old.

The DTS-HD Master Audio 5.1 track is exactly what it has to be. There’s nothing really going on in the surrounds as best as I could tell. It’s all pretty much dialog and simple music and sound effects. The audio shouldn’t even be an issue in deciding if you want to pick this one up.

Build Your Own: There is one for each episode. You are given directions to build one of these contraptions through step-by-step demonstrations. There is an appropriate warning not to do these things without adult supervision.

The show reminds me a little of those informative pieces they used to run between the cartoon on Saturdays in the 1970’s. Much of it is obscure enough that you likely will learn something with each episode. There are so many of these informative shows on the various “educational” networks here in the States, but I found this one to be more amusing than they usually are. If you’re looking for a little fun in your discoveries than Wallace And Gromt’s World Of Invention is “just the thing”.

Gino Sassani is a member of the Southeastern Film Critic's Association (SEFCA). He is a film and television critic based in Tampa, Florida. He's also the Senior Editor here at Upcomingdiscs. Gino started reviewing films in the early 1990's as a segment of his local television show Focus. He's an award-winning recording artist for Omega Records. Gino is currently working on his 8th album Merchants & Mercenaries. Gino took over Upcomingdiscs Dec 1, 2008. He works out of a home theater he calls The Reel World. Favorite films: The Godfather, The Godfather Part II, The Body Snatcher (Val Lewton film with Karloff and Lugosi, not the pod people film), Unforgiven, Gladiator, The Lion King, Jaws, Son Of Frankenstein, The Good, The Bad And The Ugly, and Monsters, Inc.
South Park: The Complete Fifteenth Season (Blu-ray) Dysfunctional Friends