Posted in: Disc Reviews by Archive Authors on April 11th, 2012 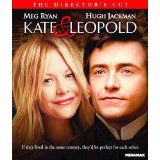 Holy chick flicks, Batman! Aye, the torture! Even all of the previews on this disc are chick flicks. There are very few that I can stand. Mostly, because they do not follow the usual chick flick script. Will this one be one I can get behind? I guess we will see. If anything I can get behind watching Hugh Jackman for a few hours. Though, looking at the cover, I prefer him as Wolverine. Oh yes. Enough drooling, on with the show.

We start with a man giving a speech about time in an earlier century. Leopold (Hugh Jackman) is in the crowd doing a sketch drawing of the monument behind the speaker. Stewart (Liev Schreiber) is laughing because the man speaking is talking wildly about the “erection” of this new monument. Heh heh, hey Beavis… He said… Erection! Leopold goes home and gets ready for a party. He is getting dressed and his uncle is talking about his need to take on a wife. He tells him what a failure he is and how he needs to marry someone with a lot of money in order to make himself useful to the family. This kind of sounds familiar… Anywho, he is told to announce his bride tonight. Or else! Dun dun dun!

He goes down to the party and dances with several not so interesting women. Stewart shows up and is nosing around. Leopold seems awful interested in what this man is doing. Stewart sneaks into Leopold’s room and it looks like he is taking snapshots of something with a device that is obviously, not of this time. Leopold catches him and the chase is on. Its raining and wet. Oh yes. I don’t mind this. Where is a good mud wrestling scene with these two? Though, I still prefer them as Wolverine and Sabertooth (Mmmhmm, sammich), I will take what I can get. The chase leads them to the monument. Climbing and running and climbing and running, and OHHHH thunder! They slip around and it comes to Stewart falling. Leopold catches him but Stewart insists that he let him go, and that he will be alright. They both fall into what looks like a big cloud above the river.

Recent day. Kate (Meg Ryan) is at a movie theater. She is doing a focus group. For a sappy chick flick, go figure. It looks awful, like… REALLY awful. Worse than what I am watching. Cab ride with friend shows Kate’s bitter side about a break up with a guy named Stewart. Gets to her apartment and pours a bath, but gets distracted by noises upstairs. She decides its a good idea to go on the fire escape to take a peek. She sees two people and leaves to go back to her apartment and calls upstairs. It is her ex, Stewart, and they argue for a time about what he is doing up there. He tells her he found his great great great grandpa, and brought him home from another time. They argue quite a bit and she doesn’t believe a word he is saying. They end on a very unhappy note. Ho hum.

Next morning, Leopold wakes up and starts hitting remotes. TV turns on, then heavy rock music. They start arguing and Kate comes down to be nosy, again. After finally getting rid of her, Stewart promises to get Leopold back to his time. Stewart goes to take a very hyper dog out, but he falls into an elevator shaft. Leopold is looking around and nosy Kate comes down to get something. She makes Leopold take the dog for a walk. He ends up very lost. He finds the monument and is excited that it is now a bridge. He and the dog follow a fire truck back to the apartment. Stewart was found in the elevator shaft and is in the hospital.

Kate’s brother gets home and hears noises from upstairs. It is Leopold telling a story to a little kid about pirates. Switch to Kate in the hospital visiting Stewart. She still thinks he is absolutely crazy. She is cold as ice. She comes home and freaks out about about her brother being upstairs. Her brother invites Leopold for dinner and she hates it. He comes down and she freaks out the whole time and is cold and just snarky the whole time. She finally kicks him out after being really rude. She is all around bitter and harsh, and she really shows it here. Does Leopold turn that frown upside down?! Keep watching to find out.

The video is in 1.85:1 widescreen presentation at 1080P resolution. This movie is now over a decade old but thanks to some cleanup, we get a pretty good picture. The only softness I could find was in the film’s opening scenes and a slight halo as the sun rose over New York City. Flesh tones appear to be accurate and there is a certain charming quality to the video production that blends 1876 with the modern day.

For the audio portion, we get a 5.1 DTS-HD English track. Audio quality is excellent, dialog is very clear for the most part and I noticed no obvious problems. Sound effects for a romantic comedy were particularly strong including great examples of how rain, club bass, and clapping should sound on a 5.1 track. Dynamic range is in full effect and all speakers are used more often than I would have thought. Subtitles are included for English, English SDH and Spanish.

This is your typical romantic comedy. You know how everything is going to go from start to finish. There are no surprises here. I honestly wish there were more scenes with Liev Schreiber and Breckin Meyer. Without them, this movie would have been a total loss. They bring a quirkiness to an otherwise, boring and typical movie. I wish I could say that watching Hugh Jackman for a few hours was enough, but in this case, it is not. He is a gorgeous man, as is Liev Schreiber, neither of which should ever be in another chick flick. The first way to lose your man card? Play in an awful chick flick with Meg Ryan (who only knows how to do chick flicks). Pass on this one folks. Go get Wolverine: Origins if you wanna see some hotness.

I have to comment about the actual history involved in this movie. There are so many inaccuracies here that while the story is not a historical film and is just a comedy, it just makes the writers seem lazy. For instance, Leopold is supposedly from 1876. but he tells Stewart that for all he knows, Stewart could be Jack the Ripper. Jack the Ripper started his shenanigans in the 1880’s. This was the one I noticed, look it up, there are several more. The co-writer/director even mentions this is in the commentary. He doesn’t care that there are inaccuracies, cause it is a romantic comedy. Excuse me, but the things you messed up would have not taken long to fix. Next time, don’t be lazy.