Alvin and the Chipmunks: Chipwrecked (Blu-ray) 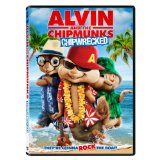 The Chipmunks began life oddly enough as a singing group, of sorts. They were the brainchild of struggling songwriter Ross Bagdasarian and were named after the three chief executives at Liberty records. His own alter ego David Seville’s name came from his World War II Army station in Spain. The Chipmunks first appeared in a 1958 record called The Witch Doctor, but wouldn’t officially become The Chipmunks until later that year when The Chipmunks Christmas Song was released. It is for that Christmas music that I most remember the group. They first appeared as puppets on The Ed Sullivan Show. Alvin and the boys got their own television show in 1961. When Ross died in 1972, the Chipmunks would continue on under the guidance of his son. In 1983 The Chipmunks had yet another popular cartoon show and had appeared in countless specials and films. Today they are pretty much a hallmark at the holidays, and a Christmas song collection just wouldn’t be complete without them.

With the level of computer-generated technology we have today, it shouldn’t really surprise anyone at all that the ‘munks would make their way to a feature film using state-of-the-art computer graphics. The first film enjoyed a pretty sweet run, raking in well over $200 million at the domestic box. When you consider the just under $60 million budget, a sequel was just as irresistible as the Chipmunks themselves. That was 2007. Two years later The Squeakquel pulled in almost the same exact box on a slightly higher budget. Now the boys are back for number three. This one pulled in about $135 million, a bit under the first two but still twice what it cost to make the film.

The new film starts out pretty badly. It’s vacation time and Dave (Lee) and the gang of Chipmunks and Chipettes are about to set sail on a cruise ship. It doesn’t take the Alvin long to get into trouble, and the captain has put them on notice. One more slip-up and they’ll be serious trouble. To make matters worse Ian (Cross) is now working on the ship as the pelican mascot. He wants payback on Dave and the gang and intends to catch them up to no good. Unfortunately, no good is Alvin’s middle name and before you know it they’re all off the ship and on an island with an active volcano and nutty Zoe (Slate) who has been on the island alone for a decade looking for a hidden treasure. Well…. she’s not exactly alone. She’s got a whole series of balls to talk to ala Castaway.

Fortunately, the film gets a lot better from this point onward. Dave and Ian are looking for the gang. Simon gets bitten by a spider and turns into the daredevil and charming Simone. The kicker is that Alvin finds himself the responsible one for a change.

It’s typical Chipmunk zaniness mixed in with the occasional break-out of song that you’ve come to expect from the franchise. The blending of live action and computer animation continues to get better. The Chipmunks sport even more detail, and they all blend in quite seamlessly. You really are able to forget that the chipmunk characters aren’t really there with the actors. The same voice cast returns with Alan Tudyk adding the voice of the Simone version of Simon.

Chipwrecked  is presented in its original aspect ratio of 1.85:1. The 1080p image is created via an AVC/MPEG-4 codec at about 27 mbps. This is a very bright film from the lighting to the colors. There is a huge usage of primary colors in the film, and they look absolutely reference both in live action and computer-generated elements. The print is in pristine condition. Detail and sharpness combine to give you a lot of detail here. It is particularly impressive on the animated characters. The fur looks pretty good as does the texture of their trademark clothing. Black levels are deep and provide plenty of shadow definition at all times. It’s a solid image presentation. It’s got plenty of new-toy gloss and shine to hold the kids’ interest.

The DTS-HD Master Audio 5.1 presentation brings those musical numbers to life. Let’s face it. That’s where a lossless audio is going to shine in a film like this. The rest is really comic dialog and not near as impressive. The dynamic quality of the tunes really does stand out here. I was particularly impressed with the crisp highs, so essential to a sped-up Chipmunk sound. The boys’ voices have come a long way since 1958.

This is a three disc release. You get the film and extras on a Blu-ray disc. There is a standard DVD version and a digital copy of the film.

Munk Music & Dance Machine: This is a jukebox of the film’s musical numbers.

Going Overboard With The Chipmunks: (7:50) You get both clips of the film and some of the original cartoon stories that inspired this one. Ross Bagdasarian and wife Janice talk about the old tales that combined to create this story.

Munking Movies In Paradise: (6:43) This is basically a mockumentary about how production got kicked out of Hawaii to film on location and ended up in Canada because the Chipmunks didn’t behave on set.

Alan Tudyk – Chipmunk Apprentice: (6:39) Another mockumentary has Alan Tudyk training to be a Chipmunk voice.

Everybody Munk Now: (7:39) Cast and crew offer some behind-the-scenes stuff, but it’s all very silly.

Extended Scenes: (5:11) There are five with handy play-all in various stages of production.

The Chipmunks have been around for nearly 60 years now. The characters have done a pretty good job of reaching across several generations, and the kids today appear to get a pretty good kick out of them now. The computer-generated versions continue to entertain. It’s a pretty safe bet that they’ll be more to come. As long as everyone’s having such a good time and the box office continues to deliver, I think you can look forward to another few years of The Chipmunks. “I’m down with that.“

Gino Sassani is a member of the Southeastern Film Critic's Association (SEFCA). He is a film and television critic based in Tampa, Florida. He's also the Senior Editor here at Upcomingdiscs. Gino started reviewing films in the early 1990's as a segment of his local television show Focus. He's an award-winning recording artist for Omega Records. Gino is currently working on his 8th album Merchants & Mercenaries. Gino took over Upcomingdiscs Dec 1, 2008. He works out of a home theater he calls The Reel World. Favorite films: The Godfather, The Godfather Part II, The Body Snatcher (Val Lewton film with Karloff and Lugosi, not the pod people film), Unforgiven, Gladiator, The Lion King, Jaws, Son Of Frankenstein, The Good, The Bad And The Ugly, and Monsters, Inc.
Kate and Leopold (Blu-Ray) We Bought a Zoo (Blu-ray)