Into the Abyss (Blu-ray) 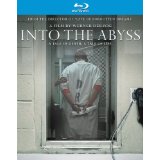 As a nation, the United States is pretty evenly divided on most of the larger issues of the day. Nowhere is that more evident than the opinions on capital punishment. If you took a poll today, you’d likely still find a slim majority of Americans continue to support the death penalty. Unless, of course, you were to take that poll in Texas. The Lone Star State has pretty much led the way in dealing out death sentences since the practice was resumed in the 1970’s. For a time in the 80’s and 90’s Florida was giving Texas a run for their money, but today there isn’t a state that comes close. In both states Old Sparky has been retired in deference to lethal injection.

In 2001 Michael Perry and Jason Burkett wanted a red Camaro belonging to Sandra Stotler. They killed her and took the car. They also took her body to an isolated lake and proceeded to dump her in an area often used to illegally dump garbage as if she were nothing more than the trash that littered the area already. They went back to the house but found they could not get into the gated community without the code. So they waited for Sandra’s son Adam and his friend Jeremy Richardson to return. They lured the two boys out to the lake where they also brutally murdered the young boys. They got themselves a car to joyride in while three innocent victims lost their lives violently. The pair bragged about their heinous deeds, and when the police came to arrest them they engaged in a firestorm shootout. They even ran one officer over with the stolen car. If ever there was an argument for the death penalty, Michael Perry and Jason Burkett were it.

Ten years later, Michael Perry is scheduled to die in eight days and Jason Burkett is ten years into a life sentence with his first parole hearing in 2041. Along comes famed documentary director Werner Herzog. It doesn’t take us very long to find out exactly where Herzog stands on the issue of the death penalty when he remarks to Perry that he feels bad for the cards fate has played for him. It’s a bit of an insult, because fate had nothing to do with where Perry was going. It was the brutal and unrepentant actions and the deaths of three victims that led him there. It doesn’t really matter if you are for or against the death penalty. I’m sure few people would try to gain sympathy for a murderer by implying they were the cruel victims of fate.

The film progresses as a series of interviews with the main participants. Of course, there is Michael Perry himself who carries a huge Cheshire Cat grin throughout the interviews. Herzog tries his best to make him a sympathetic character by asking leading questions in an attempt to help Perry say some of the right things. It doesn’t work, and it’s clear that Herzog himself recognizes this. There is actually very little Perry footage considering he’s really the subject of the piece. I’d love to see the stuff that ended up on the cutting room floor.

Other interview subjects include co-defendant Jason Burkett. Both of these guys try to pin the blame on each other. But Perry’s DNA was found at the dump site with one of the bodies, which likely led to his harsher sentence and not the pleas of Burkett’s inmate father to spare his son. Burkett is about as uncredible as they come. He claims that the shootout was one-sided. He says he was sleeping in the car (the one stolen from the murdered mother) when the cops started to riddle the car with bullets with no provocation. While Herzog doesn’t agree he’s buying the story, he doesn’t make any of the obvious observations to put any holes in the story.

To be fair to Herzog, he does interview family and friends of the victims. He shows the severe level of their loss and allows them to become emotional over the case. Still, the only participant to whom he offered actual condolences was Michael Perry who lost his father a few weeks earlier. He also attempts to spin Sandra’s daughter’s words. When she attempts to explain the relief she felt seeing Perry die he swiftly moves away from her obvious closure moment and really puts words in her mouth to suggest that a life sentence would have done the same thing. Of course, it wouldn’t have.

One of the oddest interview subjects is a woman who corresponded with Jason Burkett and eventually met and married him while he was in jail. She’s a very bizarre personality. It’s actually a bit entertaining to hear her try and explain why she’s not like the usual nut jobs who write and try to have relationships with killers in jail. She’s also pregnant and plays coy with how that happened without conjugal visits. Herzog adds his own bit of lunacy by theorizing that his sperm was smuggled out of jail for her.

Throughout the piece, Herzog’s theme is clearly the idea that killing Perry won’t bring back the victims. He’s right, of course, but fails to mention that neither would any other sentence. Sentences are not about righting a wrong or even deterrence. They are about consequences, a concept the far left has long since abandoned. Studies have long showed that the death penalty does do a better job of bringing closure to the family and friends of victims.

The style is very simple, and Herzog avoids the temptation to sensationalize the piece. He allows the words of the participants to paint a very chilling picture of the crime and its impact. He doesn’t intrude as much as he has in past documentaries, and it’s a wise choice. Some of his comments are quite off the wall and might leave you scratching your head. It’s odd some of the points that bring out his own curiosity. Fortunately, these moments are few and do not spoil the effort.

Into The Abyss is presented in its original aspect ratio of 1.78:1. The 1080p image is arrived at with an AVC MPEG-4 codec at an average 20 mbps. This is a documentary shot with that kind of equipment. There’s really nothing to jump out at you in this high-definition image presentation. It all looks clean and quite clear. Black levels are fine, and the image accomplishes its goals here.

The DTS-HD Master Audio 5.1 is obviously going to be quite basic. There is some subtle music, but it doesn’t get overt and carried away. You can hear what is being said, and isn’t that really the whole point?

Even with the obvious spin, the piece is a compelling documentary and is worth watching for that alone. Herzog, to his credit, does allow the brutality of the crime and the damage it did to others to come through. The film will certainly leave you thinking. It would be hard not to be affected in a very deep way by what you see. In the end, you don’t have to agree with Herzog’s conclusions to get something out of the piece. It’s a serious look at a serious crime without a lot of the pop journalism flash. Three people lost their lives. Dozens of others were left devastated. One of the perpetrators is now dead. “That’s pretty serious.”

Gino Sassani is a member of the Southeastern Film Critic's Association (SEFCA). He is a film and television critic based in Tampa, Florida. He's also the Senior Editor here at Upcomingdiscs. Gino started reviewing films in the early 1990's as a segment of his local television show Focus. He's an award-winning recording artist for Omega Records. Gino is currently working on his 8th album Merchants & Mercenaries. Gino took over Upcomingdiscs Dec 1, 2008. He works out of a home theater he calls The Reel World. Favorite films: The Godfather, The Godfather Part II, The Body Snatcher (Val Lewton film with Karloff and Lugosi, not the pod people film), Unforgiven, Gladiator, The Lion King, Jaws, Son Of Frankenstein, The Good, The Bad And The Ugly, and Monsters, Inc.
The Divide (Blu-ray) Treme: The Complete Second Season (Blu-ray)