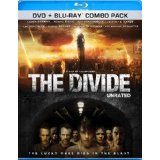 I was flipping through the latest issue of Sad Trombone magazine the other day, and it contained an article revealing — through entirely unscientific research — that the general consensus appears to be, “People suck.” As a result, I was already in the proper mindset when I sat down to watch The Divide, probably the most pessimistic movie of the past year.

After a nuclear attack, a group of nine survivors huddle in the basement of their apartment building. They are initially led by Mickey (Michael Biehn, looking like his Aliens co-star Lance Henriksen these days), the building’s profane, racist, anti-social superintendent. With absolutely zero communication with the outside world, the days go by and the secluded group — which is afraid to go outside because of the potential for radiation poisoning — gets hungrier, crankier and more desperate. (Oddly enough, that’s exactly how I got the last time I went camping overnight in a tiny tent.)

Despite a truly arresting opening image — the nuclear holocaust reflected in the eyes of Eva (Lauren German) — and a subsequent sequence that wastes little time thrusting us into the story, the movie gets off to a pretty terrible start.

Thanks to his roles in The Terminator, Aliens, The Abyss, The Rock and others, Michael Biehn has earned a substantial fanboy following. Unfortunately, it appears director Xavier Gens (Hitman) is one of those fanboys because it seems like he simply let Biehn do whatever the heck he wanted. Biehn’s cigar-chomping, bananas performance is, initially, even more jarring than the nuclear weapon that wiped out all of New York City in the opening minutes. (And, perhaps, the entire world?) You’re a badass, Michael Biehn…you don’t have to work so hard to convince us. The rest of the cast fares even worse, though I place much more of the blame on the poorly-drawn characterizations in the script — written by Karl Mueller and Eron Sheehan — than I do on the performers. (Although Michael Eklund stands out for his daring turn as a particularly psychotic douchebag.) The pacing and staging of certain scenes also feel off.

However, something fascinating starts to happen at around the one-hour mark. These annoying, uninteresting, underdeveloped characters — who can easily be summed up with generic descriptors like the Mother, the Daughter, the Black Guy or the French Guy because that’s pretty much all there is to them — start to become strange and depraved in impressively specific ways. Although the characters have already been locked up for an unspecified number of days, the change happens somewhat suddenly. Once it does, the movie becomes considerably more intriguing, but much harder to watch. In other words, it gets better.

The acting is still somewhat atrocious, but I admire each performer’s commitment. (Particularly, Eklund, Rosanna Arquette and Milo Ventimiglia, strongly playing against his good-guy Heroes type.) On top of that, Gens comes up with some truly cool and memorable visuals: the very last sequence in the movie plays out like a music video, with the images telling the story instead of dialogue and words.

The Divide becomes a lot more tolerable if you think of it as a worst-case scenario for humanity rather than any sort of realistic depiction of a slice of post-apocalyptic life. At least that’s what I hope.

The Divide is presented in its original aspect ratio of 2.35:1. The 1080p image is arrived at with an AVC MPEG-4 codec at an average of 34 mbps. For a movie that takes place almost entirely indoors in a bunker-like basement, you’d expect (or hope) for the blacks to be on point. Unfortunately, that’s not the case. The image often has a slight, unnatural grayish hue.  Some scenes looked really good (like the opening credits), but others (particularly when it came to the backgrounds) looked unintentionally grainy. The actors, however, were presented sharply throughout (especially in close-ups).

The Dolby TrueHD 7.1 track is at its best when it’s lowering the boom (the nuclear attack during the opening scene is an obvious highlight) and delivering the various sound effects of the movie’s claustrophobic setting. The lyrical, aggressive score by Jean-Pierre Taieb also comes through nicely. Unfortunately, the track is occasionally useless in delivering dialogue, particularly when there are other things going on in a given scene. Not a terribly versatile audio track.

Audio Commentary with director Xavier Gens and actors Michael Biehn, Michael Eklund and Milo Ventimiglia: This chummy commentary track predictably has the actors busting each other’s chops while Gens occasionally pipes in with a French-accented production note. Biehn holds court most of the time, Ventimiglia emerges more during the second half of the movie and Eklund is surprisingly quiet given the outlandish character he plays. Gens sticks closely to the production side of things and doesn’t offer many answers to the movie’s unanswered questions. (Who dropped the bombs? How many people are alive in the rest of the world?) That’s fine by me.

Jean-Paul Sartre famously wrote, “Hell is other people.” The Divide is far from the first work of fiction to dramatize the idea of what happens when people are removed from the rest of civilization (Lord of the Flies) or become as monstrous as their own enemy (The Mist, for one). The movie brings a relentlessly dark approach to the subject, which will put off lots of people. Personally, I admire that the filmmakers at least had a vision, and was more offended by the shoddy acting and writing. Still, the cast deserves credit for their committed performances — the physical transformations alone are impressive — and Gens deserves props for creating some striking images. I wish this Blu-ray had been able to take some of those visuals to the next level.