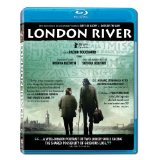 Set against the backdrop of the 7/7 terrorist bombings that rocked London in 2005, London River follows the parallel stories of Elisabeth (Oscar nominee Brenda Blethyn) and Ousmane (the late Sotigui Kouyate) as they travel to the English capital and search for their respective children in the wake of the attacks. The two parents eventually meet and try to put aside their cultural differences and prejudices — though one of them clearly had more prejudices to put aside — so they can support each other in their journey.

Director/co-writer Rachid Bouchareb’s greatest feat is in establishing the worlds these character’s inhabit. The Guernsey farm where Elisabeth lives and the forest where Ousmane works to help preserve elm trees get equal weight. However, I was most impressed by the detailed, low-key way Bouchareb captured the Finsbury Park section of London, which features a sizable Muslim population. Unfortunately, the director’s deliberate pace and eye for detail also lead to some dull passages. The movie, which is only 88 minutes along, also seemed to want to stall the meeting of Elisabeth and Ousmane to the point of contrivance. (I realize they were on a similar mission, so it made sense that they’d be in a lot of the same places, but I thought it was still a bit over the top.)

London River doesn’t delve too deeply into the terrorist attacks — which killed the four bombers, 52 additional people and injured over 700 more — because it is more interested in exploring the issue of what connects human beings to one another. The script, by Bouchareb and co-writers Zoe Galeron and Olivier Lorelle, takes a rather sparse approach to tackling these ideas. Fortunately, Blethyn and Kouyate do an exceptional job of picking up the slack from strands the story merely hints at. (For example, the devastating realization that Elisabeth doesn’t know her own child much better than Ousmane, who left his family when his son was a small child and has never seen him as a grown man.)

Blethyn is terrific as Elisabeth, a sheltered woman who had probably never seen a Muslim in person before traveling to London. Her initial prejudices come from ignorance and fear (rather than hatred), and Blethyn conveys the proper mixture of insecurity and determination in the face of that fear. Kouyate, on the other hand, gives a quietly regal performance as Ousmane, who says more with his deliberate walk and weary gaze than he does with his words. The actor also deserves credit for grounding Ousmane just enough to keep him out of Magical Negro territory.

The two actors anchor a story that is more commendable than engaging.

London River is presented in its original aspect ratio of 1.78:1. The 1080p image is arrived at with an AVC MPEG-4 codec at an average of 29 mbps. There is consistent grain in the image (probably intentional), whether it’s panoramic shots of the English countryside or close-ups of the actors. (The interiors and the night scenes are the most obvious offenders.)  Other than those shots of the English countryside near the beginning, the movie mostly eschews color in favor of its relentlessly gray and gritty representation of north London, which comes through quite nicely. The relatively poor image isn’t a total deal breaker due to the low-budget, docudrama vibe of the production.

The Dolby Digital 2.0 track could be a little clearer on the dialogue, which is a bit of an issue because we don’t have the option of turning on subtitles. (The movie’s only subtitles pop up automatically when a character starts speaking French.) It’s also not the most dynamic track in the world, although we do get a fair amount of ambient sounds that help immerse the viewer in city life. The elegant score comes through the best.

Interview with director Rachid Bouchareb: (8:49) In the only special feature — presented in HD — the director talks (in French with English subtitles) about how his desire to work with Kouyate propelled this project. He also discusses Blethyn learning French in four weeks, the recurring themes of travel and immigration in his movies, and his love for improvisation. (His original script was just 40-pages — typically, each page equals one minute of screen time — which explains a lot.)

London River offers a humane message, two strong lead performances and a fresh depiction of life in London. I just wish the script hadn’t been quite so lacking, and that the movie had been able to deliver those things in a more dynamic way. This low-key character drama is worth watching if you stumble onto it on TV, but the Blu-ray doesn’t offer much in the way of incentives that will make you want to run out and pick this up.