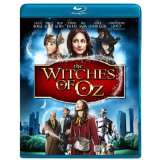 I am not sure about others, but I often I think I daydream more than most. Perhaps it is about being a published author, perhaps it is about being an adventurer in mythic times. When I watch movies, I want to travel to a New World, whether scary or magical where I can let my fantasies wander in any direction I wish. Today, I review Witches of Oz which sounds like it might involve the magical land of Oz. In reality, it only involves the world of New York City. Wicked witches indeed.

Stop me if you have heard this part before. Ages ago, when magic filled the land and all sorts of magical creatures roamed the landscape. Now, there was good and dark magic. However, evil always has dark intentions and was able to conquer good magic. The world grew dark except for something called “The Changing Word” which was used to create a new realm called Oz. “The Changing Word” was never supposed to be used again.

The guardians in Emerald City had the locked book and even though the Witches of the East and West knew about it, it was determined to be safe. But the Witches did come and the Wizard of Oz (played by Christopher Lloyd) was forced to hand over the book to the witches. But the Wizard is smarter than he looks and in a clever ruse, it is young Dorothy who has the key to the book. Suddenly, the little girl (key in hand) is warped to another dimension, away from the witches.

Somewhere in Kansas, Dorothy is transported to a corn field. She is rescued by Henry and Em (played by Lance Henriksen and Liz Douglas). They raise her as their own and we join the story much later as Dorothy grows older. Dorothy is now much older, I would say early 20’s (played by Paulie Rojas) and takes care of Henry (Em passed away a while back). She also oddly enough writes children’s stories about Oz.

Dorothy does not actually remember anything from the adventure as her memories were suppressed. But she is able to write based on dreams that she keeps having at night. Until she can land that book deal however, she does what she can and helps to run a local store with her friend Allen (played by Ari Zigaris). One day that changes when Rick (played by Ross Edgar) brings her a special letter about an amazing book deal but it has to be signed in New York.

However, Dorothy does not really want to go. She needs to take care of Henry, but Henry tells her that it is finally time to leave the nest. A car comes to pick up Dorothy and Allen (he is the artist on the books) to go to the airport. As luck would have it, the agent herself, Billie Westbrook (played by Eliza Swenson) is picking up the author and the artist personally. They soon land in the world of New York City and are taken to a fabulous new apartment. But in the distance, a dark and ominous castle beckons with evil intentions.

Witches of Oz is intended as a 4 hour television mini-series but it was actually released to several theaters too. It runs nearly three hours long and has a ton of characters, a lot more than this review would indicate. However, as with a lot of films of this ilk, it has some serious inconsistency issues. The overall story indicates some strength and Dorothy was pretty well cast, as was Allen and the agent Billie. Christopher Lloyd is a complete delight for the limited screen time. But the other actors from the get go seem to break character or have moments of weakness.

Besides the random moments of broken character, the story has a lot of gaping holes. I mean, I guess you could say that such and such happened because of magic or perhaps it had something to do with the fact that nobody ages in Oz (see magic) but it is unnerving. People also have a habit of just showing up with little or no purpose. Seriously, two of the main characters, Nick Chopper and Princess Langwidere (played by Billy Boyd and Mia Sara) have zero purpose in the movie except as comic relief. From where I stand, it is not very good comic relief either.

The video is presented in 1.78:1 widescreen at 1080p. The results are mixed here. When dealing with flesh colors and people of the fairer sex, the show looks really good, even bordering on excellent. The special effects or lack of a convincing fantasy landscape leaves a lot to be desired. Overall one could describe it as above average but not by very much. It would have been nice if the budget was bigger to accommodate more believable effects.

The audio is in English 5.1 DTS HD Master Audio (also a 5.1 Dolby Digital Track is included). Dialog is fairly straight forward and I did like that they used all available channels as necessary. Surrounds are not numerous (which is depressing given the nature of the film) but they are used enough to create a good balance. At least I never really had to adjust the volume. English SDH and Spanish subtitles are provided.

Witches Of Oz was considered a labor of love from director Leigh Scott. In reality, it is too much work to watch. Far too many plot holes, far too many inconsistencies exist in this motion picture. I did particularly enjoy Paulie Rojas, Christopher Lloyd and Eliza Swenson but that hardly is enough for this movie. Perhaps I am spoiled by fantasy mini-series such as 10th Kingdom and Alice but this one simply did not have enough legs. The blu-ray also is bare bones with nothing special in the video or audio department. No recommendation here, just an average showing and a darn shame.

Michael Durr has been reviewing movies for the better part of fifteen years now. He primarily enjoys thrillers, sci-fi, animation and even a little courtroom drama. His favorite films include Escape from New York, the Goonies and anything with Alyssa Milano. When he’s not praising Kurt Russell as the greatest actor of our time or scratching his head over a David Lynch flick, he’s spending time at home in Texas with his lovely wife, Lori and his amazing son. How they put up with him is a mystery, but even Basil Rathbone doesn’t have the time to solve that one.
Ice Road Truckers: Season 5 London River (Blu-ray)