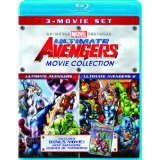 Most of us are aware (well movie and comic book fans anyway) that on May 4th, the Avengers movie will be released to the public. For years now we have watched the Iron Mans, Thor, Captain America and even a Hulk movie or two in anticipation of something greater. With that day coming closer all the time, I received a very nice 3 movie set of Avengers, animated style. Avengers might be the best movie of the summer (sorry Dark Knight), but this might be the best animated blu-ray value of the spring.

Ultimate Avengers
World War II among many other things brought us a great hero, Captain America. Steve Rogers with the help of a Super Solider serum became the mighty hero and was very successful in fighting the Nazis. However, after a missile explosion, Rogers crashes into the North Atlantic and is frozen for decades. Years later, Nick Fury and a SHIELD team would find his frozen form and revive him back to full health.

As a result of finding Captain America, Bruce Banner and Betty Ross work to recreate the Super Soldier serum. In the meantime, SHIELD learns that the Chitauri (an alien race) was the real threat behind the Nazis and is planning on attacking the Earth again. Captain America must do what he can and try to recruit heroes like Iron Man, Thor, Black Widow, Giant Man and Wasp. Elsewhere, it appears that Bruce Banner is not using the Super Solider serum on test subjects but himself. Danger is inevitable.

Ultimate Avengers 2
The second Ultimate Avengers adventure takes us to Wakanda (a fictional Marvel nation that is believed to part of Africa). T’Challa has returned from the outside world and has learned that his kingdom is the location of a brutal Chitauri attack. T’Challa assumes the mantel of the Black Panther and seeks the aid of Captain America. Nick Fury and SHIELD request that the Avengers assemble and take on the fight.

The Avengers will do so but without Thor (who foresees a grim future if he were to participate), and without Bruce Banner (Hulk) who is not to be trusted at present time. The team travels to Wakanda to investigate the attacks. However, once they get there they are treated to hostile attacks from the Wakanda soldiers themselves. Meanwhile, the Chitauris are closing in and the Avengers must rally and stop the threat. Hopefully, they do so without injury and worse consequences.

Stark raises the children as his own for the next 12 years. However, the threat of Ultron is not lost and Stark has been creating his own team of Iron Avengers (robots used to mimic abilities of the former Avengers) to thwart the evil entity. Soon, the Vision and perhaps even an aging Hulk will help to take up the fight. But the band of four young Avengers teamed with the son of Hawkeye might be the greatest foe Ultron has faced yet. It is do or die and the Earth’s fate lies in the balance.

These three full length cartoons (each of them clock in at the seventy five minute range) are great looks into the Avenger/Marvel universe as well as an attempt at ushering in a new audience with brand new heroes to come. The first two Ultimate Avengers movies create a great balance of giving us the heroes we have come to love but by giving them all a unique personality. Captain America is a golden boy, Iron Man is a playboy and Giant Man is inferiority complex boy. Everybody is distinct in their own way.

They also mix it in with some gripping issues. The concept of death, even for superheroes exists here to some degree, far more common than traditional Marvel books. However, that is also perhaps its greatest undoing as it is not one hundred percent certain whether they are aiming for the completely mature crowd or a new crop of kids. Even the most obvious movie aimed at kids (Next Avengers) has some rather difficult subjects that not every kid is going to get.

But darn it if I did not love these movies. Before, I had seen Ultimate Avengers 1 and 2 multiple times and while I was new to Next Avengers, thanks to trailers, I felt already comfortable with it. I love the characters, the stories are well done and overall everybody gets a fair shake. Well except for Hank Pym, but the Ant Man/Giant Man/and everything in between has always had personality issues in the comics and in such a very soft place in my heart.

The video is presented in 1.78:1 widescreen at 1080p. The animation in all three of these features is a mixture of mostly hand drawn 2-d animation for needed areas of emotion and then some cgi spots where we need a heavy dose of detail and visual spectacular. It really works for the most part and the color is excellent. Sometimes, I feel guilty because I want even more detail in my Avengers features but it does the job here.

The audio for Ultimate Avengers 1+2 is in English 7.1 PCM (along with English and Spanish Dolby Digital EX 5.1) and 7.1 English DTS-HD for Next Avengers: Heroes of Tomorrow (with a 5.1 Dolby Digital EX Spanish Track). This is arguably right on part with the amazing audio we usually get with Marvel live-action big budget films. Dialog is nice and strong and the sound effects are out of this world (pun intended). Surrounds are used effectively and this one is near reference quality. English SDH and Spanish subtitles are provided for all movies.

Next Avengers: Heroes of Tomorrow

This week I have had the opportunity to review a couple of amazing animated Marvel 3-packs on Blu-Ray. The first of which is the Avengers pack you see here. These are the same discs already available separately but in a wonderful value pack. I think I saw the set going for roughly $15 on Amazon which is insane given three movies, great video, incredible audio and a ton of special features that represent both the animated movies and the comics they came from. I appreciate the heck out of the latter.

The Ultimate Avengers movies are just as good as I remember them. The new one for me, Next Avengers was not quite as good but certainly a worthy movie to round out the bunch. Sure there are a few missteps but I think most fans that are not a stick in the mud will enjoy it just fine. I give this one of my higher recommendations and think that any Marvel fan with blu-ray needs to have this in their collection (as well as the other Marvel 3-pack I am reviewing later this week). Must watch, must own. Get it now!

Michael Durr has been reviewing movies for the better part of fifteen years now. He primarily enjoys thrillers, sci-fi, animation and even a little courtroom drama. His favorite films include Escape from New York, the Goonies and anything with Alyssa Milano. When he’s not praising Kurt Russell as the greatest actor of our time or scratching his head over a David Lynch flick, he’s spending time at home in Texas with his lovely wife, Lori and his amazing son. How they put up with him is a mystery, but even Basil Rathbone doesn’t have the time to solve that one.
London River (Blu-ray) Cinema Verite (Blu-ray)