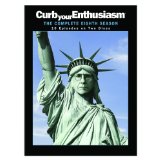 “I’m yelling for society, for everybody! It’s not just me!”

That’s Larry David chastising a dog walker who didn’t bring along a bag to clean up after her pooch, but that statement also tidily summarizes the premise of Curb Your Enthusiasm. After 11 years, seven seasons and 70 episodes of over-analyzing and kvetching — and after pulling off an incredibly well-received Seinfeld reunion in season 7 — a small part of me wondered if David had anything left to complain about heading into season 8. I should’ve known better.

In fact, I’m surprised it took this long for someone — in this case, Larry’s best friend/manager Jeff (Jeff Garlin) in the instant-classic “Palestinian Chicken” episode — to come up with the perfect moniker for Larry: social assassin. It was always going to be impossible to top the Seinfeld reunion, so it wasn’t surprising to see the show get back to basics. Of course, for this show “getting back to basics” means we get to see Larry clash with an angry group of Girl Scouts, people who take up two parking spaces, a woman who says “LOL” instead of laughing out loud, and famous folks like Rosie O’Donnell, Ricky Gervais and Michael J. Fox.

Season 8 starts with Larry and wife Cheryl (Cheryl Hines) finally breaking up for good before the opening credits after a coaster-related argument. (The previous two seasons saw Larry on his own quite a bit, but he always fought to get Cheryl back; in season 8, Hines is gone after the first episode.) Without Cheryl as his anchor — Curb fans can argue amongst themselves if calling the polarizing Cheryl an anchor is a compliment or an insult — Larry proceeds to wreak havoc on two different coasts (the show splits the season evenly between Los Angeles and New York) and date even more women who are probably out of his league (Rebecca Creskoff, Samantha Mathis, Amy Landecker, Anne Bedian). Although their arguments had gotten tiresome, I think a little more Cheryl would’ve gone a long way. Instead, the result is probably the most scattered batch of Curb episodes since season 1, unless you count Larry repeatedly jumping on a plane to avoid doing charity work as a unifying thread.

Then again, some shows don’t need serialized storylines to totally work. (Louie on FX, for example, is consistently genius despite the fact that most of the episodes have very little to do with each other.) More importantly for Curb, season 8 has a few episodes that rank among the best in the series. In addition to “Palestinian Chicken”, which revealed that anti-Semites make the best chicken in Los Angeles and not-so-subtly poked at the issue of opening a mosque near Ground Zero, I thoroughly enjoyed “Mister Softee” (Larry finds a way to redeem infamous Boston Red Sox scapegoat Bill Buckner), “The Bi-Sexual” (a romantic competition with Rosie O’Donnell somehow morphs into a joke about the baseball Hall of Fame and performance-enhancing drugs), “Vow of Silence” (Larry at his most wonderfully inane, scolding people who cut in buffet lines and “pig parkers” who take up two spaces) and “Larry vs. Michael J. Fox” (featuring a great, flamboyant turn by young actor Edward Schweighardt and suggesting that Michael J. Fox has a secretly sinister side).

Of course, there are a couple of clunkers. “Car Periscope” was a visual joke stretched too far, and I thought Ricky Gervais’ guest appearance as a self-absorbed version of himself in “The Hero” fell flat because we’ve already seen Gervais play self-absorbed versions of himself in HBO’s Life Too Short as well as various award shows and talk show appearances. There are also a number of jokes and visual gags that are telegraphed way too far in advance (like Buckner randomly standing near an open window while Larry held a valuable baseball that Buckner was destined to drop.) Also, even though O’Donnell, Fox and Gervais did strong work on the show, I still prefer watching Larry interact with his core group of friends: Jeff (Garlin and David have the best chemistry on the show), Leon Black (JB Smoove, still delivering laughs despite the fact that his character has long outstayed his welcome), Marty Funkhouser (Bob Einstein) and Richard Lewis (as himself). On the other hand, I fear that Jeff’s wife Susie (Susie Essman) has officially run out of ways to call Larry an a-hole, but we all know Jeff (and Larry) would never leave her.

Overall, Curb once again manages to strike the tricky balance of hyper-specific/sharply-observed humor that is also surprisingly broad. The moments of greatness in season 8 far outweigh the moments that just grate.

Curb Your Enthusiasm: The Complete Eighth Season is presented in an aspect ratio of 1.78:1. The intentionally no-frills presentation (shot on video) looks slightly better than I expected, but it’s still nothing to write home about. Color and black levels are adequate, but there are numerous scenes that look noticeably soft. Of course, no one is watching Curb Your Enthusiasm because it’s a visual feast

The Dolby Digital 5.1 track is here to deliver the mostly-improvised dialogue, which it does more than well enough. There’s not much to the soundtrack beyond the ubiquitous, ironically-bouncy theme music and other orchestral bits. There also weren’t a lot of opportunities to show off dynamics, except when Larry was chastising Michael J. Fox for having a conversation while Larry’s girlfriend was trying to play background piano music (which was appropriately muted).

Leon’s Guide to NYC: (9:36) JB Smoove (riffing in character) takes us on a mildly amusing tour of New York to explore the city’s shopping, relaxation, fine dining and recreation options. I like to think of this as a glimpse of what Leon does while Larry is on his (mis)adventures.

Roundtable Discussion with Larry and the cast: (1:28:34) Recorded live at New York’s 92nd Street Y before season 8 aired, Brian Williams hosts this free-wheeling discussion with David, Hines, Essman and Garlin. It’s a long, often fascinating conversation that covers a wide variety of topics, including the show’s reception within the Jewish community, a closer look at the cast’s process and a discussion of whether Larry David (real and fictional) is a narcissist. I liked seeing David and the cast defend the fictional alter ego who causes so many problems.

The future of Curb Your Enthusiasm is, once again, up in the air. As you can tell from the fact that there have only been eight seasons in 12 years, this isn’t some network show that you know will premiere in September and have its season finale in May. If this turns out to be the show’s swan song, Larry David and Co. went out with a strong batch of episodes. More importantly, he confirmed that — whether we get new episodes or not — there is no end to his crankiness.