Posted in: Disc Reviews by Gino Sassani on June 5th, 2012 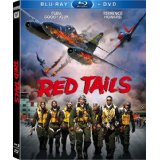 “Blacks are mentally inferior, by nature subservient, and cowards in the face of danger. They are therefore unfit for combat.” – U.S. Army War College Study 1925

Obviously, there’s another story to be told here. George Lucas says that he’s been wanting to tell this story for over 20 years. It’s a story that has often been told in both film and documentary form. In none of those cases has the movie been made into the kind of spectacle film that we find in Red Tails. Lucas gives the legendary air group the Saving Private Ryan treatment, and we get to see these World War II heroes in flight like we’ve never seen before.

The Tuskegee Airmen were the first black combat pilots in United States history. At a time when the U.S. military had released a study that claimed blacks were not qualified to become combat pilots, a group of dedicated recruits proved them wrong. They were named for the city in Alabama where they trained. Once there were enough graduates to form a fighting unit, they took their place in Italy to fight in the second World War. At first they were given very menial missions that offered little to no opportunity to show what they were capable of doing. They flew sub-par planes in backwater operations and then were judged by their inability to score targets. It appeared they had been set up to fail, until they were finally given a chance to escort bombers in enemy airspace. They became one of the most decorated units of the war and were often requested by bomber units, most of whom had no idea they were asking to be protected by a completely black squadron of fighters. They served in a segregated military but proved themselves to the point that the days of military segregation ended with World War II.

Red Tails covers the expected ground. It picks up with the unit already formed and flying mundane missions. All the while Colonel Bullard (Howard), known by his unit as “The Old Man” was fighting the brass to give them a chance to fight. Fighter pilots had a nasty habit of abandoning the bombers they were escorting to chase kills. It was a form of keeping score. The habit left the bombers unprotected and was anticipated by the Nazi flyers, who would intentionally lead the fighter escort away. Bullard was given a chance to prove the unit’s worth. He got them new planes and an important bomber escort mission. The unit painted the plane tails red to distinguish their unit. Once given their chance, the Red Tails stayed with the bombers and got them home safely. They even took out a German airbase. The rest, as they say, is history.

Lucas pulls out all of the stops here. The film has some of the most realistic dogfights ever put on film. The work was so heavy that seven other effects houses were called in to share the load, many pulling off over 500 shots each. You’d think the empire that is Industrial Light & Magic could get the job done. But no expense was spared to make this an intense experience for the moviegoers. The craft are incredibly authentic, and the action takes your breath away. It all melds seamlessly with the real photography.

But it’s not the awesome effects that make this a rather good film to see. That’s all eye candy that does a great job of keeping you on the edge of your seat. The first and best choice Lucas made here was hiring Anthony Hemingway to direct the picture. You might know Hemingway from his work on the HBO series The Wire. It was an exceptional show for many reasons, and Hemingway was certainly a huge part of that. It would be his first feature film, but that didn’t turn out to be the problem here. He didn’t have to fret the huge effects stuff. After all, who better to keep an eye on that stuff than George Lucas himself? Hemingway was hired because he knows how to deliver the human drama. It’s what made The Wire so good, and it’s what makes this film stand out even more. All of the beautiful effects in the world won’t amount to a hill of beans without a compelling drama. It’s the human story that’s really being told here, and Hemingway brought over a few of his young actors from The Wire and elsewhere to create a truly dynamic cast. The characters are all memorable and brought to life through strong performances, wonderful chemistry, and a director who understands how to get the most out of his cast.

These characters are worth a mention here. One of the most emotional performances throughout The Wire was delivered by Andre Royo playing Bubbles. He’s underused here as chief mechanic Coffee Coleman. When he’s there he brightens up the film. I can’t help thinking of Coffee as how Bubbles turned out once he’s had a few years of sobriety under his belt. Terrance Howard is the commanding officer fighting the white brass for a chance. Cuba Gooding, Jr. is the unit leader Major Stance. His goal is to infuse pride into a unit that is used to having to hold their heads low. David Oyelowo is the hot shot Lightning, who is usually too gung-ho for his own good. Nate Parker is Easy, the squadron leader who has a problem with the bottle. Musician Ne-Yo plays the deep-South Smokey. Marcus T. Paulk is Deke, the true believer of the squadron who carries with him a holy card picturing “Black Jesus”. Triston Wilds is Ray Gun, but often referred to as Junior. He’s out to try and prove his own worth. Bryan Cranston is a kind of villain of the film. He plays Colonel Mortimus, who doesn’t really want the Tuskegee Airmen to succeed. In a bit of irony, his father Joe Cranston was trying to make a film in the 1970’s on the same subject but was closed down when the studio thought they were spending too much money on what they essentially thought of as a “black film”. Rounding out the film is Simon & Simon’s Gerald McRaney as the more supportive General Luntz and NCIS: Los Angeles’s Kensi Daniela Ruah as an Italian love interest for one of the fighter pilots. When you consider how many of these actors came out of television, it’s an impressive group.

Red Tails is presented in its original aspect ratio of 2.40:1. The 1080p image is arrived at with an AVC MPEG-4 codec at an average 25-30 mbps. The high-definition image presentation is as impressive as you would expect a Lucas film to be. The image is always crystal-clear and laser-sharp. The computer work blends in perfectly with the live action. Colors are bright and really pop at times. The planes reveal wonderful texture. If there is any complaint, it’s that the film almost looks too perfect and shiny at times. Watching the dogfights will give you some of the most spectacular, yet lifelike images you’ll find anywhere. This is likely the first time I thought an image was too good.

The DTS-HD Master Audio 5.1 is just as awesome. The surrounds are used to their complete and full advantage. Bullets will whiz by your ears as planes swoop and dive throughout your viewing room. In all of this wizardry there is also a rousing score that doesn’t ever get in the way. Dialog pierces through the madness just perfectly. You can literally hear the breeze as the planes move about in the air. Add to all of this a lively and dynamic sub channel, and you really couldn’t ask anything more from this wildly immersive experience.

Double Victory – The Tuskegee Airmen At War: (1:05:47) This is a comprehensive documentary on the real guys. Surviving members give their accounts while Cuba Gooding, Jr. narrates the history of the group. There’s also plenty of vintage footage from newsreels.

The Cast Of Red Tails: (25:11) Each of the cast members introduces themselves and their characters.

One of the filmmakers remarks that this is not just a black story, but an American story. He’s right, and the film has plenty of the patriotic flair that we used to see in our war movies. Unfortunately, the film couldn’t sell its message at the box office. It only pulled in about $49 million, far short of its budget. It did well for two weeks and tanked after that. Part of the problem was the lack of a promotional campaign. Another issue is the January release dates. It’s a dead time for moviegoing, and this film deserved much better. Now’s your chance to discover what you missed. I’m sure many involved in the film are more than a bit miffed at the little respect the film’s been given. “When you get upset, when you get mad, you turn red, right?”

Gino Sassani is a member of the Southeastern Film Critic's Association (SEFCA). He is a film and television critic based in Tampa, Florida. He's also the Senior Editor here at Upcomingdiscs. Gino started reviewing films in the early 1990's as a segment of his local television show Focus. He's an award-winning recording artist for Omega Records. Gino is currently working on his 8th album Merchants & Mercenaries. Gino took over Upcomingdiscs Dec 1, 2008. He works out of a home theater he calls The Reel World. Favorite films: The Godfather, The Godfather Part II, The Body Snatcher (Val Lewton film with Karloff and Lugosi, not the pod people film), Unforgiven, Gladiator, The Lion King, Jaws, Son Of Frankenstein, The Good, The Bad And The Ugly, and Monsters, Inc.
96 Minutes Curb Your Enthusiasm – The Complete Eighth Season