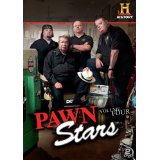 “I’m Rick Harrison, and this is my pawn shop. I work here with my old man and my son, Big Hoss. Everything in here has a story … and a price. One thing I’ve learned after 21 years? You never know what is going to come through that door.”

Remember that PBS show where some old-stuff expert would come to your town and sift through a lot of junk that folks found in their basements or attics? Remember that he would give you a story about the items these people brought in? The idea was that once in a while someone discovered valuable treasure in those dusty rooms. Remember that show? This isn’t that show. It does, however, have some things in common with the old PBS program.

The Harrison family runs a Las Vegas pawn shop. That in itself is like striking gold. We have a lot of pawn shops in Tampa, but I have to figure if there’s a city in this nation that contains a large number of people hoping to turn their stuff into quick cash, it’s the gambling mecca out in the sands of Nevada. I’m sure that was one of the reasons History chose this particular pawn shop for their reality series Pawn Stars. And no, I don’t think it’s an accident that the name sounds a lot like Porn Stars. The other reason they chose this shop has to be the personalities of the Harrisons themselves. If these guys weren’t already real, somebody would have had to make them up by now.

The main guy appears to be Rick. He’s a fast-talking negotiator who will end up taking your treasure and a finger or two with it if you don’t watch out. There’s no question this guy can deal. A lot of folks go up against him, perhaps because of seeing him on the show. But you’ve got to be sharper than a lot of the knives and daggers that come into his shop in order to keep up with him. He has an inherent understanding of his opponent, and he knows that most ordinary folks aren’t even in the same league. And that’s what keeps them coming in. Everyone likes to think they can out-negotiate the best. And Rick is one of the best. Hell, I’d love to try my skills on the guy. The billboards won’t tell you, but going up against this guy is the biggest gamble in Vegas. Remember, the house always wins, and that goes for pawn shops as well as casinos.

Next you have “The Old Man”, Rick’s father. I get the idea he must have started the shop and owns the major share of the business. He might have been as sharp as his kid at one time. I don’t know. It seems that his purpose now is to play the store grouch. There’s little doubt he holds on to a nickel like a great white shark holding on to a baby seal.

Finally you have Big Hoss, Rick’s kid, and his long-time friend Chumlee. Both look like biker gang members. They have arms loaded with tattoos, and Big Hoss, Rick’s kid, drives a hefty bike. He’s obviously learning the trade on the job, which sometimes gets him in deep water with the elder two. Take, for instance, the time he buys a motorcycle frame and puts a ton of money into building a custom bike. Chumlee, on the other hand is the target of everyone’s jokes. He appears to be a little simple, but I can’t tell if it’s an act or he really is that stupid. This season he appears to exhibit a couple of Rain Man qualities when he fixes an RC car no one else could fix. He also gets to do some negotiating this season, but he’s still not given very much respect.

The real stars of the show have to be the people and the stuff they bring in. Some of the cool stuff brought in this season includes: Colonel Sanders’ (the chicken guy) famous white coat, A World War II mine training kit, an RV, a hockey stick signed by the entire 1980 Olympic Dream Team, a G.I. Joe nurse doll, a 300-million-year-old spider fossil, a Rembrandt etching, Houdini’s handcuffs, a chessboard made out of the wood of the Titanic, The investigating detective’s case files from the Lindbergh kidnapping case, and a 1950’s pedal car.

It becomes increasingly more obvious that the lighter moments in the shop are staged. I’m particularly sure the Chumlee stuff has to be. In one episode he’s sent to get a record signed by Bob Dylan, who is in town to perform. It’s unlikely Chumlee just ran into him on the street. I don’t mind so much, it’s just getting more obvious.

Each half-hour episode is presented in its original broadcast aspect ratio of 1.78:1. The picture looks about average for television. But, the truth is, that picture quality isn’t going to be an issue for fans of the show.

The Dolby Digital 2.0 is simply dialog.

Again you must note that this is NOT season 4 but rather volume 4. A&E/History are breaking up the seasons for this series. Part of the reason is the great number of episodes that make a season. “I guess I should have known better.”

Gino Sassani is a member of the Southeastern Film Critic's Association (SEFCA). He is a film and television critic based in Tampa, Florida. He's also the Senior Editor here at Upcomingdiscs. Gino started reviewing films in the early 1990's as a segment of his local television show Focus. He's an award-winning recording artist for Omega Records. Gino is currently working on his 8th album Merchants & Mercenaries. Gino took over Upcomingdiscs Dec 1, 2008. He works out of a home theater he calls The Reel World. Favorite films: The Godfather, The Godfather Part II, The Body Snatcher (Val Lewton film with Karloff and Lugosi, not the pod people film), Unforgiven, Gladiator, The Lion King, Jaws, Son Of Frankenstein, The Good, The Bad And The Ugly, and Monsters, Inc.
Brad Meltzer’s Decoded, Season 2 Act of Valor (Blu-ray)