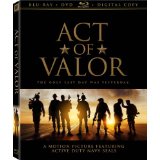 “Before my father died, he said that the worst thing about growing old was that other men stopped seeing you as dangerous. I’ve always remembered that, how being dangerous was sacred, a badge of honor. You live your life by a code, an ethos. Everyone does. It’s your shoreline. It’s what guides you home. And, trust me, you’re always trying to go home.”

It would be easy to dismiss Act Of Valor as either a recruiting tool piece of propaganda or yet another in an endless line of war films attempting to capture some form of authenticity. It would be easy, if you haven’t seen the film. I can promise you that no matter what your views on war or the military in general, the one thing you simply won’t be able to do is dismiss Act Of Valor.

“In valor there is hope.”

We live in an age where sofa warriors exists in the millions. Ever since the awesome impact of those first moments in Saving Private Ryan exploded on our movie screens there has been a Hollywood arms war intended to deliver the most authentic war experience yet. The most popular video games of the day feature various forms of combat with heightened effects and immersive technology. Players gather their “special ops” teams and play cooperatively through many dangerous operations. The problem is always going to be that you’re safe on your couch, and you know it. The truth is that no one who hasn’t actually gone to war will ever experience that reality, while those who have wouldn’t wish that experience on anyone else. Finally, a film comes along that attempts to take you on at least a partial journey into actual combat. It’s a world of brotherhood and emotion where there is no reset button when one of your brothers falls. We live in a dangerous world, and Act Of Valor does a particularly grand job of bringing that message home.

The film opens with the capture of a CIA operative who has been acting as a humanitarian doctor, but is spying on one of the world’s most dangerous terrorists. A Navy Seals team is assembled to rescue the operative, but the story doesn’t end there. The rescue reveals a complicated terrorist plot that will make 9/11 look like a “walk in the park”. The mission involves several engagements with heavily armed enemy combatants.

Act Of Valor has two very unique things going for it. The Navy Seals team is being played by actual active Navy Seals. You might expect the acting to suffer, and certainly the performances aren’t quite as polished as we’re used to seeing. But they do come across as more real than anything Hollywood’s thrown at us in quite a while. These guys didn’t have to go to a celebrity boot camp where they think they’ve learned to be soldiers. They really are soldiers, and the ease with which they carry out these operations is something no amount of weekend training can ever provide. The second element involves something Hollywood has never done before. The film used live ammunition for many of the firefights. Only the extensive training of these soldiers allows for the set to remain safe. If it often feels like you’re watching the real thing, it’s because you are.

Some of the images are beautifully shot. There are moments when you can truly appreciate the beauty of the environments. The firefights are frantic and explosive. Some of the camera work might take your head for a spin. It’s better than the “found footage” material you might be expecting here.

Directors Mike McCoy and Scott Waugh display obvious respect for the subjects of the film. Some might call the movie mere propaganda, but the sense of honor and sacrifice shown here is absolutely genuine and sincere. These people will lay down their lives for their country and their brothers, and it comes through with stunning clarity here. Again, whatever your political views might be, you can’t not be in awe of what these men do every day of their careers. The film shows real family members as well and illustrates the impact these actions have on those family members. The narration is taken from a letter from a comrade to his fallen brother’s unborn child. The words have a ring of truth and describe a sense of duty that the rest of us can only wonder about.

Act Of Valor is presented in its original aspect ratio of 2.40:1. The 1080p image is arrived at with an AVC MPEG-4 codec at an average 25 mbps. I’m not sure that the filmmakers here were as concerned about the value of a high-definition image presentation, but they did get the best out of their realistic style of shooting. The detail still comes through, particularly on close-up shots. Black levels are quite solid and an important part of several scenes in the film.

The DTS-HD Master Audio 5.1 is somewhat muted at times. The dialog is a bit flat, but I suspect that it has to do with the realistic approach. The audio more than makes up for this during the action scenes. The surrounds put you solidly inside the action. The sub response really kicks it up during these kinds of scenes.

Deleted Scenes: (9:23) There are six with a play all option.

Director’s Intro: (3:12) This short introduction was included at the press screening I saw. The two directors tell us about the idea of using real Navy Seal members.

Interviews With Active Duty Navy Seals: (30:27) Meet the real guys as they talk about what drew them to that particular profession and a few experiences.

Making Of Act Of Valor: (5:26) These next short pieces are really just promo shorts.

Act Of Valor is a must see. You can’t really have an opinion about war, at least an informed one, until you’ve seen this. You’ve heard of the few, the proud? Take a look at “the damn few”.

Gino Sassani is a member of the Southeastern Film Critic's Association (SEFCA). He is a film and television critic based in Tampa, Florida. He's also the Senior Editor here at Upcomingdiscs. Gino started reviewing films in the early 1990's as a segment of his local television show Focus. He's an award-winning recording artist for Omega Records. Gino is currently working on his 8th album Merchants & Mercenaries. Gino took over Upcomingdiscs Dec 1, 2008. He works out of a home theater he calls The Reel World. Favorite films: The Godfather, The Godfather Part II, The Body Snatcher (Val Lewton film with Karloff and Lugosi, not the pod people film), Unforgiven, Gladiator, The Lion King, Jaws, Son Of Frankenstein, The Good, The Bad And The Ugly, and Monsters, Inc.
Pawn Stars: Volume 4 Too Big to Fail (Blu-ray)