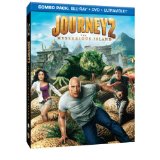 “In the 19th century Jules Verne wrote some of the greatest adventure stories ever told. Novels such as 20,000 Leagues Under The Sea, Journey To The Center Of The Earth and The Mysterious Island. Most consider these works of science fiction. Vernians know otherwise.”

In 2008 Brendan Frasier had himself a rather unexpected hit with Journey To The Center Of The Earth. That film posed the fantastic question: What if the works of Jules Verne were not based on fantasy at all, but rather actual events, people and places. Frasier’s Trevor Anderson was part of a family whose tradition for generations was to safe keep these Verne secrets. The film was intended as a nice 3D romp and pulled in a respectable amount at the box office. We knew that meant more. The only question was: Would we continue with that story or strike out on an entirely new Jules Verne adventure? With an almost entirely new cast, the studio decided on taking the later road. Enter Journey 2: The Mysterious Island.

Sean Anderson (Hutcherson) hasn’t heard from his Uncle Trevor in quite some time since their adventure to the center of the Earth. He’s now living in Ohio with his mom and brand new stepfather Hank (Johnson). Hank’s been trying to connect with Sean, but the two just aren’t getting along, and Sean’s getting in trouble. His latest escapade is breaking into a satellite facility to boost a radio signal. He believes his grandfather, Alexander (Caine) has sent him a secret code. Hank sees an opportunity to share something with Sean, and he helps him crack the code which appears to reveal the location of Jules Verne’s Mysterious Island. Before they know it, they’re halfway around the world in the South Pacific looking for the island and Alexander. They hitch a ride with seedy helicopter pilot Gabato (Guzman) and his attractive daughter Kailani (Hudgens).

Of course, they crash on the island and find Alexander. The only problem is that the island’s sinking, and fast. Their only chance is to find yet another Verne object and get to safety. Along the way they’ll have to contend with large creatures and a volcano that spews ash made of gold. If the animals don’t get them, temptation might.

On the surface, the film is pretty much like the original movie. It brings more of the world of Jules Verne to life. Hutcherson is the only returning cast member, but the film is populated with plenty of good actors. Michael Caine is always a joy, and this isn’t the first time Dwayne Johnson has followed a Brendan Frasier in a franchise. Those two actually share the best chemistry in the film. Luis Guzman provides the expected comic relief, and Vanessa Hudgens provides the eye candy for the teen boys. Apparently Hutcherson is quite the thing for the teen girls. The acting is pretty solid all the way around.

The special effects are also quite good. The creatures are nothing short of magical, and they blend in quite nicely with the live action. Kids will get a particular kick out of a bee-riding chase. Technically, this is a very solid film.

So why does it feel so lifeless? The movie’s pace is as much a mystery as anything on the island. I remember the tagline in a Stephen King book I read was: “Whatever I’m doing, I’m rushing to do the next thing”. It went something like that, anyway. That’s how this film feels from the start. Everything is almost episodic. Director Brad Peyton is in too much of a hurry at every turn. The result is that nothing quite joins together the way it should. Sean and Hank make incredible jumps of logic to locate the island that serves no purpose but to move along. Certainly, you want to keep your pace moving, but Peyton’s giving us the bum’s rush at every corner. From almost the minute they get to the island, they discover they must leave. It made me feel like I do at popular exhibits where you hardly have a chance to look and they’re pushing you to move along. The first film wasn’t really that much longer, but director Eric Brevig allowed us time to enjoy what we were watching.

The end result is a very well produced film that just doesn’t ever satisfy. If you want to follow the exploits because you loved the first film, I strongly suggest a rental.

Journey 2 is presented in its original aspect ratio of 1.85:1. The 1080p image is arrived at with an AVC MPEG-4 codec at an average 25 mbps. The picture looks great. It’s bright and shiny and everything a kid’s movie ought to be in as far as a high-definition image presentation. There’s plenty of sharpness and detail, but I didn’t get any texture from the film. Everything has a glossy finish; that again is likely OK for the kids. Black levels are solid, and there are no artifacts or enhancement issues to speak of.

The DTS-HD Master Audio 5.1 is a mixed bag. I was quite disappointed with the uninspired use of surrounds. The audio never really immerses you in this wondrous place. Almost every turn I felt there was a missed opportunity to surround us with the life of the island. On the other hand, there is some solid sub action, and the dialog comes through just fine. The score is terribly derivative. I caught serious rip-offs of both Jurassic Park and Raiders Of The Lost Ark. If you want John Williams, hire John Williams.

There is an interactive map that gives you several short behind-the-scenes features as you explore. Here’s a hint: Take the Junior tour and it will all play out for you without having to explore the map.

Deleted Scenes: (5:53) There is no play all and many have unfinished effects. One explains how the animals survive the cyclic sinking of the island while the other is a wisely cut dig at Ohio.

This is entirely kids’ stuff, but it didn’t have to play that way. Even in 2D you can’t help but groan at the obvious gimmick use of 3D in theaters. This one actually made more money worldwide but did slightly less in the States. There’s a tease about the next Verne novel in the franchise, and I’m sure it will happen. They just need to hire a new director. Peyton had all the right stuff, but it appears the only thing going through his head was: “Now that I’ve got you, what do I do with you?”

Gino Sassani is a member of the Southeastern Film Critic's Association (SEFCA). He is a film and television critic based in Tampa, Florida. He's also the Senior Editor here at Upcomingdiscs. Gino started reviewing films in the early 1990's as a segment of his local television show Focus. He's an award-winning recording artist for Omega Records. Gino is currently working on his 8th album Merchants & Mercenaries. Gino took over Upcomingdiscs Dec 1, 2008. He works out of a home theater he calls The Reel World. Favorite films: The Godfather, The Godfather Part II, The Body Snatcher (Val Lewton film with Karloff and Lugosi, not the pod people film), Unforgiven, Gladiator, The Lion King, Jaws, Son Of Frankenstein, The Good, The Bad And The Ugly, and Monsters, Inc.
Entourage: The Complete Eighth and Final Season (Blu-ray) Accident (Blu-ray)