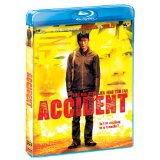 Every day accident fatalities happen all over the world. These deaths are so obviously accidental that the authorities hardly think twice about them. In director Cheang Pou-Soi’s Accident  a team of four assassins, Brain (Louis Koo), Fatty (Suet Lam), Uncle (Fung Shui-Fan) and Woman (Michelle Ye), each a master of the art of the invisible kill, stage their assassinations so perfectly as to appear to be simply “accidents” even under the closest scrutiny.

After years of successful contracts they have almost saved enough to retire, but when an easy hit goes bad and an accident claims the life of one of his crew, Brain begins to unravel with paranoia. Had someone staged the accident under his nose? Is there a hit out on his crew? Who is behind it? How could he have not seen it coming in spite of his obsessive-compulsive attention to detail? Or is this all in his head and he is going crazy?

Hong Kong director Cheang Pou-Soi (Dog Bite Dog; Shamo), creates an atmospheric if a bit talky and slow thriller in Accident. He attempts to infuse it with a quirkiness common in David Lynch films, but fails to get under your skin like Lynch’s classic slow-burn style. The “accidents” themselves have a cool Final Destination meets Rube Goldberg machine quality to them. Unfortunately there are not enough of them and, other than a handful of decent moments, the movie drags until its strong and rather abrupt ending.

Louis Koo carries the movie with the strongest performance, as Brain is the best-written character of the bunch. Unfortunately Fung Shui-Fan, Michelle Ye and Suet Lam aren’t given as much to work with, and their characters provide plot support more than develop. The film works best when the “accidents” are being staged. There is a genuine tension and beauty to the deaths. Unfortunately there is a lot of talking. And when they are not talking, there is a great deal of staring off pensively. Koo can handle the action, it just appears the script didn’t allow for that much of it. Still if you don’t mind the pacing and are willing to invest the attention to detail it demands, Accident is a rewarding crime thriller with a different skew on a familiar story.

Accident is encoded with MPEG-4 AVC 1080p transfer, presented in an aspect ratio of 1.78:1 cropped from its original aspect ratio of 2.39:1. Shout Factory’s presentation is horrible. Due to the cropping the framing is problematic, and at times it’s difficult to follow what is happening on screen. The high-def transfer is beyond weak, loaded with heavy filtering, contrast issues, color reproduction issues, and compression issues. Details are soft and often flat. Colors are dull and blacks are crushed. This really is a whole lot of ugly coming out of Shout Factory’s video transfer department.

Accident comes with three standard audio tracks on this Blu-ray disc: Cantonese DTS-HD Master Audio 5.1, Cantonese Dolby Digital 5.1, and Cantonese Dolby Digital 2.0 track. For the record, Shout Factory provided imposed English subtitles for the main feature so the subtitles cannot be turned off. The Cantonese DTS-HD Master Audio 5.1 track is nicely immersive, especially during the “accidents.” Xavier Jamaux’s score is quite atmospheric and moody, given the appropriate LFE boost when needed. The dialog is clearly captured and mixed well with the SFX and soundtrack music. All and all, it is decent audio, but still a step down from the original Cantonese Dolby TrueHD 7.1 track available only on the Hong Kong Blu-ray release.

There is a great story in this, but the writing in Accident never allows it to rise above a mediocre Hong Kong crime thriller. This would make for a great remake though. If you like Hong Kong crime pot boilers, you could do worse than Accident, just don’t expect the over-the-top kinetic action and violence so common with that genre.

“Initial police investigation indicated it was an accident…”