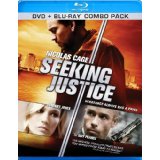 When I saw that Nicolas Cage and January Jones were headlining a little-seen/straight-to-DVD-caliber title, part of me was perversely excited. This had the potential to be a historic summit of bad acting! To be fair,  I generally enjoy the — shall we say — avant garde stylings of Cage’s performances, but I’m much less impressed by the relentless joylessness Jones bring to her work (even on the excellent Mad Men). In short, I was prepared to laugh and I was prepared to wince. However, I was not prepared to enjoy this entertaining, preposterous thriller as much as I did.

Cage and Jones star as Will and Laura Gerard, a happily married New Orleans couple. You know they’re the perfect little cultured pair because she’s an orchestra cellist, and he’s a high school English teacher who plays hyper-competitive chess games with a co-worker (Harold Perrineau). Their world is shattered one night when Laura is brutally attacked after leaving work. While an emotionally distraught Will is in the hospital, he is approached by a stranger named Simon (Guy Pearce). Simon claims to represent an organization that is fed up with the shortcomings of the criminal justice system. He offers to exact vengeance on Laura’s attacker in exchange for a favor from Will somewhere down the line.

Will eventually accepts the deal. Not surprisingly, the favor Simon asks in return six months later is slightly more complicated and dangerous than having Will pick up his dry cleaning.

Director Roger Donaldson (The Bank Job and the underrated No Way Out) knows his way around a solid thriller, and he grabs your attention from the opening scene. (We see grainy footage of a scared, unknown man about to expose the dirty dealings of a secret organization before he chickens out.) Donaldson also creates a strong sense of paranoia and tension as soon as Will accepts Simon’s deal. Every single person Will encounters — the friendly hospital security guard, the convenience store clerk, a little old lady on the street — could potentially be a part of Simon’s group, and the director has lots of fun with that notion. He also takes full advantage of his setting, and the city of New Orleans becomes a significant character in the movie. (And not just because the film’s climax takes us to the Superdome.) That climax involves Will turning the tables on Simon by having him play an unnecessarily elaborate game, which tells me Seeking Justice has a sense of humor about itself.

The script by Robert Tannen has plot holes and logic gaps big enough to fit an entire Mardi Gras parade — the less you ask questions like, ‘How could Simon know about Laura’s attack so soon after it happened?’, the better — but it also says some interesting things about how little faith some people have in the justice system. (The perils about taking the law into your own hands are obviously addressed in a more heavy-handed way.)

As a frustrated everyman, Cage isn’t asked to go into Manic Cage mode, but he avoids Comatose Cage mode (see, Drive Angry…actually, don’t) and brings a jittery energy to the role, particularly in the film’s second half. On the other hand, Jones is as hopelessly stiff as ever as she’s asked to do Betty Draper things like frown disapprovingly at a husband who is hiding things from her. Meanwhile, I admit to having soft spot for Guy Pearce (Memento and L.A. Confidential are two of my favorite films…heck, I even liked Ravenous), and he has fun with his devious character without going over the top. The reason Simon is so persuasive is because he completely believes in what he’s selling.

The movie probably features one twist too many toward the end and woefully under-utilizes Jennifer Carpenter (Dexter). However, Seeking Justice is a thoroughly ridiculous thriller (in the best sense) that also happens to be quite well made and entertaining from start to finish.

Seeking Justice is presented in its original aspect ratio of 2.35:1. The 1080p image is arrived at with an AVC MPEG-4 codec at an average of 22 mbps. The video transfer features impressive sharpness and good black levels (much of the action takes place at night). It also doesn’t shy away from effectively presenting some of New Orleans’ griminess, which lends the film lots of character. As a result, the color is mostly subdued.

The Dolby TrueHD 5.1 track does a bang up job during loud action sequences (an early car crash, urgent foot chases), but is even more impressive in its versatility. Will spends a fair amount of time talking with Simon on the phone, and the track presents the phone end of the conversation in a suitably subdued manner that is still audible for the audience. The Superdome sequence juggles a monster truck rally, crowd noise and Simon on a phone, and somehow makes everything perfectly audible. The dialogue is clear throughout and works well with the movie’s score. New Orleans also comes alive thanks to subdued ambient noises.

Seeking Justice: Behind the Scenes: (7:08) Presented in standard definition, this sad, lonely special feature is the biggest disappointment in this Blu-ray package. The mini-doc itself is fairly standard (featuring some nice behind-the scenes footage of the film’s most exciting stunts), but I’m bummed that this is all we get. There are also brief comments from cast and crew. Cage claims he “signed up for the ride” (while neglecting to mention he probably needed the money) and has glowing things to say about Pearce and Jones. (Note to haters: the fact that he praised January Jones’ performance in this film with a straight face proves beyond a shadow of a doubt that Nicolas Cage can act!)

Seeking Justice was originally known as “The Hungry Rabbit Jumps”, which is a key phrase in the movie. Although Seeking Justice is a pretty generic title, I suppose we should just be glad the film didn’t wind up being called Simon Says.

If you feel like turning off your brain and watching a solid, absurd thriller, you should give this one a spin. The Blu-ray’s A/V presentation is quite strong, just don’t expect to gain any extra insight into the film through the lackluster special features.