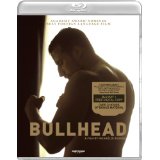 “Sometimes things happen in life that turn everybody silent. So silent that nobody dares to talk about it anymore. To no one. Not even themselves.”

Who knew there was a hormone mafia in Flanders (not Homer Simpson’s neighbor, but Flanders is part of Belgium, but unique with its own dialect and culture)? Evidently, shady criminals sell illegal experimental hormones to farmers so they can fatten up their livestock. In Bullhead these are brooding crooks that sit and talk about their problems a lot and seem to resent cows a great deal. The one with the biggest problems happens to be the biggest man among them, Jacky Vanmarsenille (Matthias Schoenaerts) Jacky is a mess of steroids and muscles. He internalizes and represses is anger so much that you can practically hear the time bomb counting down when he breathes.

Jacky runs the cattle farm with his brother, Stieve (Kristof Renson), and his Uncle Eddy (Jean-Marie Lesuisse). Although Stieve long ago moved out and settled down with a family, Jacky still lives at home with his elderly parents. Jacky is angry (a common occurrence) at his brother, because Stieve picked up a cheap stolen set of tires for his BMW from a pair of local mechanics, the Filippini brothers, Christian and David (Erico Salamone and Philippe Grand’Henry).  Turns out the car the tires are tied to a murder of an undercover cop and this has brought the attention of the police down on Jacky Vanmarsenille and his family.

This is all somehow linked to hormone mafia kingpin Marc DeKuyper (Sam Louwyck), the man the murdered undercover cop was investigating, and with whom Jacky is negotiating with to providing his regular fix of cow steroids for the poor herd. One of DeKuyper’s entourage turns out to be Diederik Maes (Jeroen Perceval), a former childhood friend of Jacky’s and current confidential police informant. Somehow this all tracks back to a literally emasculating moment in Jacky’s childhood, which Diederik witnessed and led to Jacky’s chronic steroidal abuse. If this sounds complicated, it is because it is.

Unfortunately, Bullhead is much like the character of Jacky, brooding, hulking and threatening, but never really getting release. This is a movie that seemed to promise something, but never keeps its promises. I kept waiting for Jacky to blow. Why set up a character like his and not let him do his thing? The setting is suitably disgusting. You can practically smell the scent of cow shit on the character’s clothes. And there is a girl in Jacky’s life, Lucia Schepers (Jeanne Dandoy), if you consider stalking a perfume sales girl qualifying as being in one’s life. She is tied to Jacky’s childhood tragedy, but she is unaware of the connection. Needless to say, Lucia doesn’t realize the depth of Jacky’s problems and this only frustrates Jacky further. For a movie with so much talking, not a lot of communication is going on here.

Bullhead is encoded with a 1080p, MPEG-4 AVC in the aspect ratio of 2.35:1 converted from its original aspect ratio of 2.39:1.  Belgian cinematographer Nicolas Karakatsanis deliberately desaturated the image and paints everything in farmland earth tones. The blacks are layered and detailed. The colors pop rich during flashback scenes and remain muted during the main narrative. There are very little noticeable compression errors or digital artifacts and the transfer remains true to the film source, despite Image Entertainment releasing this with three hours of HD extra material all compressed onto a BD-25.

Bullhead’s DTS-HD MA 5.1 track is subtle but efficient. There are moments of complete silence to build the tension, sounds highlighted to convey psychological beats and other times the music of a nightclub explodes to paint the violence on the screen. The surround remains immersive, but rarely used. For the most part the sound design is minimalistic. The score by Raf Keunen is a powerful and understated presence throughout the movie. Dialog to SFX and music ratio is well balanced.

In Bullhead, Belgian writer-director Michaël R. Roskam tries to capture the style of film noir, let’s call it farm noir. Unfortunately he doesn’t quite stick the landing. He has the style down, but the story itself doesn’t pay off. I consider it an interesting, but failed experiment in European crime dramas. I stand alone with this opinion according to the other critics I have read, but this movie is not a crime thriller. Nothing thrilling happens here. It does enjoy excellent acting and a rich setting, but not much else goes on. If you love depressing French movies you will enjoy this, if not, you, like Jacky, may be a bit frustrated in the end.

“If you say one word about that BMW, he’ll make sausages from your nuts.”

TED Independence Week Contests #2: America: The Story Of Us From A&E/History