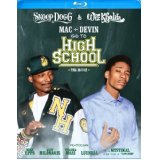 “Now, if you’re unfortunate right now and don’t have any weed, I’m sorry. But please stop this movie right now — it just won’t work if you can’t watch this without no weed.”

Did I mention that this disclaimer at the start of Mac & Devin Go to High School comes from a profane talking joint named Slow Burn (voiced by rapper Mystikal)? Anyway, I can’t say I wasn’t warned.

Despite the strong urgings from Slow Burn — who somehow manages to get himself high, prompting me to wonder how it was possible for a joint to get high before I came to the crushing realization that I was over thinking this one — I did not partake in any illegal substances. As much as I wanted to drug myself before sitting down to watch this movie, I decided it was important to maintain some professionalism. Plus, I couldn’t get ahold of my guy.

The plot (hahahahahahahaha!) follows Mac (Snoop Dogg), a popular 15-year senior who sells weed to the students and faculty at N. Hale High School (get it?), and Devin (Wiz Khalifa), a straight-laced student who is about to become class valedictorian. Unfortunately, Devin is struggling with his commencement speech because he’s never done anything fun and has nothing to talk about. When Mac and Devin are teamed up as lab partners in chemistry class, Devin gains some valuable life experiences (in the form of marijuana, prostitutes and about 100 tattoos), while Mac finally decides he wants to graduate high school so he can go out with the hot substitute teacher (Teairra Mari) who won’t date students. I suppose that’s as good a reason as any.

Look, the Mac & Devin filmmakers obviously didn’t set out to challenge Steven Spielberg’s Lincoln or P.T. Anderson’s The Master when Oscar season rolls around this year. Unfortunately, this movie makes even How High — another school-set stoner comedy starring a pair of rappers — look like The King’s Speech. I can appreciate that some movies are, shall we say, enhanced if the audience smokes weed while watching them. (My out-of-left-field suggestion: Spike Jonze’s Where the Wild Things Are.) The problem here is that Mac & Devin is 100 percent dependent on viewers being high as a kite.

Snoop Dogg has more than 50 acting credits to his name and brings an easy charisma to everything he does. Wiz Khalifa, on the other hand, is about as bad and wooden as you’d expect from a non-actor making his film debut. (Though I did enjoy the dorky long-sleeved shirts he had to wear early on to cover up his real-life tattoos.) The “Black and Yellow” rapper naturally looked more comfortable during the movie’s musical interludes and actually showed more personality in the behind-the-scenes footage that played with the end credits than he did during the actual movie.

The film itself is consistently offensive (let’s just say you’ll find stronger, more well-rounded female characters in Michael Bay movies) and occasionally disgusting (you won’t be able to un-see the “tooted and pooted” scene). A couple of crude jokes actually hit the mark, and you can definitely groove to a few of the songs, especially “Talent Show” and “Young, Wild & Free”. However, the “humor” that doesn’t come from cursing or cartoons (Slow Burn is unnecessary after the opening, yet keeps popping up) comes from painful wordplay. Besides N. Hale High School — which doubles as a tribute to the late Nate Dogg — the movie’s main antagonist (besides “good taste”) is Asst. Principal Skinnfloot. (If you don’t get that one, I’ll just refer you to urban dictionary.) Mike Epps, who also appeared in How High, has a too-small role as a frustrated teacher, while Andy Milonakis — who is definitely in the running for the title of Most Annoying Performer of All Time — shows up as a wheelchair-bound pothead. (Also, “Slow Burn Dialogue by Andy Milonakis” is possibly my favorite film credit of the year.)

Of course, I realize everything I just said is exactly why many people will enjoy Mac & Devin. My favorite thing about this movie is that it was only 76 minutes long.

Mac & Devin Go to High School is presented in an aspect ratio of 1.78:1. The 1080p image is arrived at with an AVC MPEG-4 codec at an average of 31 mbps. Considering that this movie is extremely terrible, there’s actually a lot going on from a visual standpoint. We’ve got animated sequences, intentional distortion, different film stocks for certain fantasy sequences, and laughable special effects. The Blu-ray handles the heavy lifting reasonably well. The colors were particularly on-point. Though sharpness was generally good, the image occasionally went soft during the real-world sequences

The Dolby TrueHD 5.1 track is at its best when the music is front and center during performance sequences. Unfortunately, the track is considerably less impressive in delivering dialogue. Many scenes feature characters talking while music plays in the background, but the music has been slightly pumped up to the point that it made the dialogue a bit hard to hear. I also thought the high school scenes in busy hallways or classrooms could’ve been slightly more immersive than they were.

Audio commentary with director Dylan Brown, executive producer/actor Snoop Dogg, and actor Wiz Khalifa: You’re not going to believe this, but the idea for this movie came to Snoop and Wiz while they were smoking out on the set of a music video they were filming! (I remember reading somewhere that’s exactly how Spielberg and George Lucas came up with Indiana Jones and the Kingdom of the Crystal Skull.) The duo, joined by their director, are delightfully profane and open about how much real weed they smoked during the film’s production and wanting to make the next cult stoner film. I also enjoyed Snoop Dogg calling out a nervous Wiz for having his lines on an iPad during the young rapper’s very first scene.

My favorite part was hearing someone occasionally cough, as well as the unmistakable clicking noise of someone lighting a lighter: these guys were getting high while recording the commentary for a movie where they spend almost all their time getting high! That’s kind of amazing. (On the other hand, of course they were!)

At the beginning of the movie, Slow Burn also suggested we take a hit every time someone on screen walked, talked or breathed. Even though the Blu-ray is pretty decent from an audio/visual standpoint, I kind of wish I’d taken his advice. For legal reasons, this review does not condone the smoking of marijuana. For human decency reasons, this review does not condone the viewing of Mac & Devin Go to High School under any circumstances.