Posted in: Disc Reviews by Michael Durr on July 5th, 2012 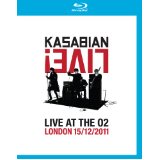 Even though by many standards, I am probably considered old, I would like to think I can still experience new music, especially when it comes to me for review. Of course, you are also reading the guy who loves to annoy others driving down the street with Whitesnake and Motley Crue. Anyway, I was definitely interested to take a gander at this blu-ray that showcased the talents of a band called Kasabian who performed in late 2011 at the O2 Arena in London. Let’s take a look.

In 1997, Tom Meighan (vocalist), Sergio Pizzorno (guitarist), Chris Edwards (bassist), and Christopher Karloff (lead guitarist) formed the band Saracuse. They all resided from England (Countesthorpe and Blaby) and put out their first demo EP in 1998. It only had three songs: “What’s Going On”, “Life of Luxury” and “Shine On” and they were recorded live. However, it helped to launch a band who was struggling to finds its mark.

Later on, they decided to adopt the name “Kasabian” after Christopher Karloff was reading up on Charles Manson literature and stumbled across the name, Linda Kasabian, the notorious getaway driver, a member of the cult or Manson “family”. The name stuck with Karloff and it was soon adopted as the band’s new name. The name implied brutality, and was a common Armenian surname which the band liked immediately. However, it would take a few more years before their music started to catch on.

In 2004, the first album, a self-titled one was released. It received generally good reviews along with a quite few good sales. Their third single, “Club Foot” was what finally gave the band the recognition they were seeking for. It was a song that was dedicated to a Czech student who took his own life in a political protest. The song went on to do fantastic business and showed up everywhere from TV shows (Criminal Minds, CSI: Miami, Smallville) to Movies (The Guardian, The Boys are Back, and Doomsday) to even Video Games (Midnight Club 3, Juiced and most recently Alan Wake’s American Nightmare).

Kasabian had arrived. But with arriving also comes every band’s share of problems. Christopher Karloff left the band in 2006 due to creative and personal differences while Jay Mehler took his place. In addition, the band also signed a drummer (they had used session drummers primarily) in Ian Matthews. Future albums would prove even more that the band was here to stay with “Empire” and “West Ryder Pauper Lunatic Asylum”. The later would reach #1 in the UK Albums Chart and win them “Best Group” at the 2010 Brit Awards.

The fourth album for the group dropped in 2011 called “Velociraptor!”. The album received the highest acclaim ever for the band. Antiquiet.com was even quoted as saying “Kasabian has found a way to channel everything you love about The Rolling Stones, Led Zeppelin and Radiohead while still keeping the unique sound that sets them apart from the contemporaries like Coldplay, Muse and The Killers.” This all paved the way to the concert in front of us today which was recorded on December 15th, 2011 at the O2 arena. It was also later screened in 60 cinemas in the UK and Ireland on May 30th, 2012.

The concert opens up by heavily showing off their new album with “Days are Forgotten”, “Velociraptor”, and “Underdog”. The energy is frantic, the crowd abuzz with the energy that is going through the arena. In addition to detailing out their new album, they also go back to favorites like “Take Aim” and “Empire”. Heck, they practically incite a riot when the band plays “Clubfoot”, their #1 and most recognizable smash. Plus, I really liked the harmony between the main vocalist, Tom Meighan and secondary vocalist/guitarist Sergio Pizzorno (who apparently was also celebrating his birthday).

This band at times has a very Muse-like feel which is shown through their use of string like instruments (a little orchestra pays in the back for certain songs) along with a very theater like quality. However, somewhere around ” La Fee Verte”, the band gets into what I like to call a syrupy mess. All bands have to slow down (well most anyway), and sometimes it is beautiful but here it just turns odd. The worst moment might have been during “Goodbye Kiss” where he asks the fans to form a heart with their hands. Yeah, okay.

The very last song, “Fire” shows us a touch of ego too with Meighan asking the audience to sit down repeatedly until they actually get them down only to have them right back up seconds later when they hit a big rock beat. I like the music at certain parts, but often times it seems like the band is buying into their own BS a little too much. They can really rock the house as evidenced by the first 45 minutes but they also put that same audience right to sleep. It really is a weird dynamic.

The video is in 1.78:1 widescreen presentation in 1080i resolution. The O2 arena is in my opinion very dark, and it plays tricks whenever they do wide shots. The color and detail is best when they are focusing in close on the band where you can see their dirty work. The usual haze/smoke machine also hurts the quality of the picture at certain spots. Overall, the video quality is above average but the location ultimately hurts much of the final picture.

For the audio portion, we get a 5.1 English DTS-HD track (5.1 Dolby Digital and PCM 2.0 tracks also included). It is a completely different story when it comes to audio though. Eagle Rock delivers its amazing audio presentation once again and drives it home. This is plenty loud (I even turned it down in anticipation of the loudness and was still a good deal off). Sound is on point and it envelopes the speakers nicely. Even for the pithy tracks, the sound still comes on as strong as ever. Subtitles (only for the Bonus features) are included for English, Spanish, French, and Dutch.

British Rock Bands have always been a staple of the Rock scene since the Beatles in the 1960’s. Kasabian is no different and if album sales and critical reception are any indication, they will be around for years to come. For fans of this band, this blu-ray is probably the best piece of concert footage they could ask for. A lot of these songs I actually like, my only problem with the band is the syrupy mess they find themselves in by the time the encore rolls around. The stage antics really does not do them any favors either.

Technically, the disc is excellent with amazing sound, above average video and a good documentary that will surely delight those who enjoy the band. It is hard to peg a recommendation here, I sincerely want to but I think that this band overtime would not warrant repeat viewing or listening. Fans of Muse, Oasis, and other British indie artists will probably love this one and I can certainly understand why. It is fun at points, it just does not last for me. Proceed but keep your own tastes in mind for this one.

Michael Durr has been reviewing movies for the better part of fifteen years now. He primarily enjoys thrillers, sci-fi, animation and even a little courtroom drama. His favorite films include Escape from New York, the Goonies and anything with Alyssa Milano. When he’s not praising Kurt Russell as the greatest actor of our time or scratching his head over a David Lynch flick, he’s spending time at home in Texas with his lovely wife, Lori and his amazing son. How they put up with him is a mystery, but even Basil Rathbone doesn’t have the time to solve that one.
American Independence Week Contest # 6 Spec Ops: The Line From 2K Games XBOX Savages