Posted in: Disc Reviews by William O'Donnell on July 7th, 2012 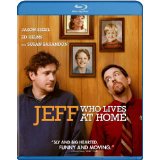 An aimless slacker named Jeff shambles out of his mother’s basement (where he lives, hence the movie title), tasked with a chore, but is sidetracked by a theory that he is being given signs. What are these “signs” meant to mean? Not even Jeff knows as he runs into his brother and mother along his seemingly random path. The films asks, is said path truly random? Or is he finally on a journey to find true meaning in his life?

This film is essentially about people who are dissatisfied about their placement in life and are in need of something drastic to shake them out of it. Jeff, played by Jason Segal, seems to focused on fruitless theories and journeys to ever make something of himself. His brother, played by Ed Helms, suspects his wife of infidelity after she blows up at him over buying a new Porsche without consulting her. Their mother, played by Susan Sarandon, is a widow who has not had excitement in her life since her husband passed on. When an anonymous love note arrives, she takes the chance of discovery who her “admirer” is.

All of the main cast are very capable performers who do a lot with the material they are working with here, but much like Jeff’s living-at-home situation, this film fails to fully launch. There simply seems to be a bit of soul lacking in the story. The audience is not offered enough to truly be interested in these characters, nor care all that much about whether they reach their goals or not, because their goals are never all that clear to begin with. We are meant to relate to their individual discontent, but the film doesn’t have the ammunition to bring us out of that funk, save for a surprisingly action filled climax…but even then, action does not increase depth of character.

I also had a problem with how this film seems to be attempting to capture that “indy” look and vibe. Part of how it does this is with it’s Xylophone-heavy score. This feels a bit dated and serves only as a reminder of other films that attempted but failed to capture the same intrigue when dealing with aimless, suburban souls the way American Beauty did way back when.

The revelation about whether Jeff’s loose theory of trailing the name “Kevin” holds any meaning could stem some interesting, post-viewing chats about the film, if only the film were interesting enough to truly discuss at any great length…which it is not.

Widescreen 1.78:1. Paramount ensured this film got a very clean and pretty visual presentation for its Blu Ray release. It’s nice to see a “smaller” film not get overlooked (smaller in relation to other major-company films).

Though there are no really dynamic sounds to show off, this film still gets a very nice sound treatment.

A noble attempt but not enough spark to make this film something truly special. A shame since, as I mentioned, the lead cast is very good in this. Curious viewers won’t be totally disappointed (some may even love it) but I’m afraid other films, that shine brighter, shall continue to overshadow it.