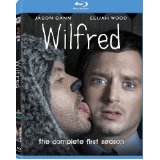 “Come on Ryan! These are big existential questions, best left for boring Russian novelists and teenagers on acid. Real people don’t think about this shit!”

As Wilfred: The Complete First Season begins, Ryan Newman (Elijah Wood), a miserably depressed out of work lawyer, just reached the end of his rope. One night, after meticulously composing the final draft of his suicide note, he downs a handful of pills, chugs them back with a bottle of NyQuil and heads off to bed. Nothing happens. He can’t even fall asleep. The following morning his hot next-door neighbor, Jenna (Fiona Gubelmann), shows up at his door asking if he would watch her dog Wilfred for the day. Thing is, where everyone else sees a big, shaggy mutt, Ryan sees a scruffy Australian man (Jason Gann) in a furry dog suit… a wisecracking, pot-smoking, frequently profane man who stands upright and seemingly has opposable thumbs under his costume.

Is Ryan hallucinating from the drugs? Is he dead and in some kind of surreal limbo? When he finds out the pills he ingested were only placebos, Ryan begins to suspect he may have suffered a total break from reality. Wilfred, however, quickly fulfils the role of man’s best friend, and Ryan and he become inseparable. They spend their days in Ryan’s basement ripping on a bong and watching reruns on TV. Although he claims he wants to help Ryan with his problems, Wilfred continually throws Ryan not just under the bus, but in front of them. Evidently a manifestation of pure id, Wilfred leads Ryan into endless trouble. Wilfred’s hedonistic tendencies know no bounds; he truly is a dog in every sense of the word.

If you prefer comedy grounded in reality or the familiar boundaries of a sitcom, this is not the show for you. Wilfred: The Complete First Season revels in absurdist humor. Series co-creator and co-star Jason Gann describes Wilfred as “Donnie Darko meets Russell Crowe on a bender”. It also takes its cues from the talking animal/imaginary friend genre like Francis the Talking Mule, Mr. Ed, Harvey, and Drop Dead Fred.

Wilfred, based on Gann’s successful Australian TV comedy of the same name, received a strong facelift when adapted for U.S. television by longtime Family Guy showrunner David Zuckerman. Where the original series proved a bit dour and hit-and-miss in its jokes, the American remake remains delightfully ridiculous. A perfect fit for FX’s comedy lineup. In fact, its premiere became the highest ranking debut sitcom ever for FX Networks.

The chemistry between Gann’s Groucho Marx style nihilism and Wood’s classic, slow-burn straight man makes for compelling and frequently hysterical viewing. A subversive darkness pervades the story as we begin to question Ryan’s sanity. Some of Wilfred’s pranks also skew a bit dark as he continues to lead Ryan down a very unhinged rabbit hole. If indeed Ryan is doing all this in some sort of schizophrenic fever dream, he really does have some major repression issues. However, if Wilfred is “real,” just what is he? Some kind of magical and mischievous creature only certain people can see like the human-sized rabbit pooka in Harvey? Wilfred: The Complete First Season revels in scattering clues to this mystery, but so far leaves the answer up to the viewers.

Wilfred: The Complete First Season is encoded with a 1080p, MPEG-4 AVC in its original aspect ratio of 1.78:1. They shot the entire series with the Canon 7D, a prosumer-grade DSLR, and it almost looks as good as shows filmed with more expensive digital rigs, like the Red One. The episodes suffer a bit from a shallow depth of field, but the quality of the image is generally exceptional. There are the occasional flaws common with prosumer-grade DSLRs, like oversaturated highlights, aliasing on fine parallel lines, and occasional digital source noise, but these quirks are so infrequent and fleeting they are almost unnoticeable. Details are sharp, the colors rich and balanced, and the blacks stable and layered.

Wilfred: The Complete First Season features a lossless DTS-HD Master Audio 5.1 surround track. Because dialog drives the series there is very little surround immersion, which is to be expected. The mix is mostly up front, but the dialog is clear and never buried in SFX or music beds. Although there isn’t any real pizzazz to the mix, it gets the job done. There is room for improvement as you can easily imagine beefing up the ambience, particularly during exterior shot scenes. However, there are no glaring glitches, hisses or dropouts. Decent audio, but nothing beyond facile production values.

I found Wilfred: The Complete First Season frequently hilarious and rewarding as a comedy. It won’t be everyone’s cup of tea, but you will know by the pilot if you are in or not with the series. It is definitely not family fare. The language, sexual situations and drug use may scare away network sitcom viewers, but it is a perfect fit for the FX Networks.

“Ryan, anger is like herpes. You’re not meant to keep it to yourself.”

Jeff Who Lives at Home (Blu Ray) Duran Duran Live 2011: A Diamond in the Mind (Blu-ray)