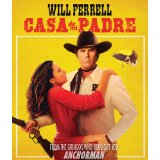 All funny ideas are not created equal. A concept that may have audiences laughing their heads off for a few minutes could wind up being absolutely torturous when stretched to feature film length. Few people know this better than Will Ferrell, one of the most popular and successful Saturday Night Live alumni of all time. He’s cracked people up on the small-screen and in multiple comedic blockbusters. Ferrell’s latest, Casa de mi Padre, seems like a classic example of an idea that would be extremely funny as a skit or a fake trailer, but becomes annoying over a prolonged period of time. The actor is surely savvy enough to realize this, and I kinda love that he decided to do it anyway.

Casa de mi Padre — directed by Matt Piedmont and written by Andrew Steele, a pair of Ferrell’s SNL cohorts — is told in the overly dramatic style of Mexican soap operas (or “telenovelas”) and westerns of the 1970s (with their choppy editing). It has more in common with Robert Rodriguez and Quentin Tarantino films than with Ferrell’s own previous work…unless I missed any slo-mo bloodbaths in Elf. Did I mention the part where it’s almost entirely in Spanish? The poker-faced movie plays it so straight with its inspiration that it’s not entirely accurate to call it a spoof; it’s more of an homage.

Ferrell stars as Armando Alvarez a simple Mexican man who loves working on his father’s (Pedro Armendariz Jr.) ranch, which is facing financial difficulties. Fortunately, Armando’s successful younger brother Raul (Diego Luna) arrives in town with a beautiful fiancee named Sonia (Genesis Rodriguez) and promises to settle the family’s debts. Unfortunately, Raul’s success isn’t exactly legitimate and he soon finds himself at war against a powerful drug lord named Onza (Gael Garcia Bernal). Meanwhile, Armando begins to fall for Sonia, who gets caught up in the middle of Raul and Onza’s drug war.

Read the previous paragraph again, and pretend we’re not talking about a movie that stars Will Ferrell. On paper, Casa de mi Padre has all the makings of a gritty south of the border crime drama. So, where does the comedy come from?

Since there aren’t as many jokes as you’d normally expect from a Ferrell film — the comedian is mostly robbed of his ability to improv; the closest he comes is a dumb bit where he and his ranch buddies chuckle for an extended period of time — most of the laughs come from bizarre and absurdist humor. We’re talking sets and backgrounds that are obviously phony, random mannequins that are placed in group scenes for no apparent reason, and a mystical white mountain cat that helps our hero on his journey (and is hilariously unrealistic). I didn’t care for some of the more meta touches — like revealing the film crew in a reflection or pausing the movie for a full minute during a gag involving a second camera assistant who screwed up a shot — but I understand why these broader moments are in the movie. (For the record, I speak Spanish fluently and was able to watch the movie without subtitles. These visual gags must be a welcome relief for people who have to read all the dialogue.)

I give Ferrell a ton of credit for even attempting to give a performance entirely in Spanish, but he actually pulls it off quite well. He puts the emPHAsis on the wrong syLLAble a couple of times, but other than that he’s solid and nicely understated as Armando. Ferrell also manages to have genuine heat with Rodriguez a few times. (One of those times is not the ridiculous love scene that shattered the record for butt shots.) Luna and Bernal — in an Y Tu Mama Tambien reunion — both seem to relish the opportunity to be in something so silly for a change. (Bernal, in particular, revels in his villainous role and gives off a bit of a Chris Kattan vibe.) Nick Offerman (Parks and Recreation) also gets a few laughs as a dogged and racist DEA agent who doesn’t care if the Mexicans kill each other because he thinks they’re all drug dealers. (In turn, Armando and Raul think all Americans are greedy babies.)

Casa de mi Padre clocks in at a paltry 84 minutes, but I realize even that might feel like a lifetime for some Ferrell fans expecting more conventional laugh riot. As far as I’m concerned, the movie certainly feels stretched — a couple of amusing musical numbers pad the running time — but I admire the heck out of Ferrell’s serious commitment to being deeply, polarizingly silly.

Casa de mi Padre is presented in its original aspect ratio of 2.35:1. The 1080p image is arrived at with an AVC MPEG-4 codec at an average of 34 mbps. The transfer features some nice intentional grain that replicates the 1970s films that served as inspiration. There’s also a purposefully golden hue to most outdoor scenes. The sharpness and colors in most interior scenes and close ups pop in the more conventional way we expect out of modern films. There’s not much use for black levels, but they’re adequate. The climactic shootout and a hallucinogenic sequence also look terrific. Overall, a pretty good transfer that gives you a great look at the obviously fake sets and props.

The DTS-HD Master Audio 5.1 track is surprisingly full bodied for a comedic film. (Then again, we’ve established that this isn’t your average “comedy.”) In addition to the shootouts that boom fantastically, the music and songs by Andrew Feltenstein and John Nau (including the title track performed by Christina Aguilera) sound pretty great. The outdoor scenes provide a bit of ambient noise, if not a fully immersive experience, but the dialogue consistently comes through cleanly. (Assuming you’re listening rather than reading.)

Audio Commentary with Will Ferrell, director Matt Piedmont and writer/producer Andrew Steele: The trio predictably spends most of the time joking around and making fun of their own movie, but there’s some solid insight to be found. We learn that Steele wrote the movie in English before it was translated into Spanish, and that no one other than the actors really spoke Spanish. The best part is listening to them gleefully point out continuity errors both intentional (Bernal hanging up twice during a a phone conversation) and otherwise (California license plates on a vehicle). Piedmont identifies nods to The Godfather and Alice Doesn’t Live Here Anymore, while Steele reveals that he inserted Bernal in a bar scene with Ferrell and Luna after realizing Luna and Bernal weren’t going to be on screen together.

Pedro Armendariz Jr. Interview: (3:37) The actor (who was quite funny as Armando and Raul’s father in the movie) died in December 2011. This hasty-yet-sweet memorial features the actor relaxing on set. He chats about working with Ferrell and understanding what it’s like to work on a movie where you don’t fully understand what’s being said.

Deleted Scenes: (19:43)  Like the movie, there’s not a ton of outright comedy in these 10 deleted scenes and the humor could be missed if you don’t speak Spanish. (One scene begins by displaying the Spanish word for “smack” on a bedside table right before Sonia gets slapped.) Instead, there’s a bit more development for Luna’s character and additional screen time for Adrian Martinez as one of Armando’s ranch hand buddies. These scenes also explain why Armando’s two best friends weren’t in that final shootout. Features a Play All option.

“Making of” Featurette: (15:43) After inexplicably sitting through the movie’s opening scene with Armando picking up a calf, we get a decent doc where Ferrell talks about how he’s wanted to do a Spanish language film for years. Luna and Bernal reveal they were skeptical that this would be a real movie, and Rodriguez says she still doesn’t understand what they’re all doing. (She only seems to be half-joking.) Ferrell also talks about working on his Spanish for a month before production and we see him tripping over his lines a bit.

“Fight for Love” music video: (3:20) The music video for the song (impressively performed by Ferrell and Rodriguez) that plays over the end credits. Originally, it was supposed to take place during the movie, and the part where it was edited out is intentionally visible in the finished film.

Commercials: (3:00) Once again, not at all what you’d expect. Instead of TV spots or trailers for Casa de mi Padre, we get commercials for fake items in the film. There’s Nick Offerman’s DEA agent shilling for Champion 100 cigarettes, Ferrell and Efren Ramirez in an extended beer commercial parody for Cerveza Escorpion, and Luna doing his “Most Interesting Man in the World” impression for Suave Leopardo cigarettes. Features a Play All option.

The Blu-ray — you can elect to have the menu entirely in Spanish — is an extension of the film’s maniacal commitment to such a ridiculous idea.

Admittedly, much of Casa de mi Padre plays out like an inside joke between Ferrell and his friends. The joke turns out to be on Ferrell fans expecting a straight-up spoof of telenovelas and instead get an oddly reverent recreation of Mexican cinema. (With a talking animal puppet, of course.) You can call Casa de mi Padre self-indulgent, and you’d be right. However, if “self-indulgent” means that Ferrell is doing what he genuinely thinks is interesting or funny instead of lazily doing what he thinks we want him to do — a few fellow SNL grads have fallen into that trap before — then I’m ok with that. Plus, he’s got Anchorman 2 coming down the pike to keep those fans pacified.