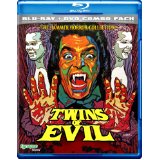 “Satan has sent me Twins Of Evil.”

Okay, it wasn’t really Satan, at least I don’t think it was. It was the folks over at Synapse who sent me the Blu-ray release for Hammer’s Twins Of Evil, and I’m pretty glad that they did. If you’re a horror fan of any worth and are old enough, you have some wonderfully frightful memories of Hammer’s run of horror films starting in the late 1950’s. Hammer pretty much began where Universal ended their celebrated cycle of horror films. Like Universal, the cycle produced a new generation of atmospheric horror films that included the classic creatures. Dracula, Frankenstein and The Mummy were all resurrected under the Hammer banner. The studio also delivered the next generation of classic horror actors led by Christopher Lee and Peter Cushing. While it’s true that changes of the guard at Hammer and a lean toward more exploitation cinema led to a decline by the 1970’s, there continued to be some notable exceptions. Twins Of Evil was one such exception.

“Oh God. Have mercy on this poor unfortunate creature. She is a child of the Devil, but we ask thee in thy great goodness, to save her soul. We commend unto thee her earthly body and seek to purify its spirit.”

Gustav Weil (Cushing), appropriately pronounced “vile”, is the leader of The Puritan Brotherhood. It’s a religious gathering that happens to get their kicks hunting down young pretty girls and burning them as witches. He’s a bit frustrated because he knows the real center of evil in town is Count Karnstein (Thomas), but he’s under the protection of “The Emperor”. Weil has also been given charge of his twin nieces after the death of their parents. The twins are played by real-life twins Mary (Maria) and Madeline (Frieda) Collinson. Maria is shy and wants to be good while Frieda is attracted to bad-boy Count Karnstein. It is Karnstein’s awkward attempt at human sacrifice that resurrects the Countess Mircalla (Wyeth) who in turn makes him a vampire. Not greedy, Karnstein spreads the wealth and makes Frieda a vampire as well. He’s not only attracted to the girl, but he considers it wonderful revenge to the pious Weil. Only the girl’s school music instructor Anton (Warbeck) understands how to rid the town of the evil curse of these vampires. He must convince a self-righteous Weil before it’s too late.

Twins Of Evil is actually the third in a Hammer trilogy of films based upon the Sheridan Le Fanu story Carmilla. The story dates back to 1872 and several stage plays and eventual film versions. Fanu’s Carmilla actually appeared several years before Bram Stoker gave us the more famous Dracula. It was the story of a female vampire and her lesbian relationship with other women, particularly one young girl. Hammer adapted the story in what is commonly referred to as The Karnstein Trilogy. But Twins Of Evil is actually much more remotely connected to the source material than the two earlier films The Vampire Lovers and Lust For A Vampire. In Twins Of Evil the Mircalla is only briefly seen and quite quickly vanishes from the scene. The nudity and sexual elements are also quite toned down from the previous two films, and while I’m sure many of the Hammer new blood probably thought it would hurt the film, this one retains much more of the Hammer atmosphere than the first two. With Cushing’s Weil character taking front stage the film can be more likened to Witchfinder General than the earlier Karnstein films.

For many the draw would be the Collinson twins playing the lead parts. The two were the first twins to appear as a Playboy centerfold and were obviously cast more for their appearance than acting ability. Both do a minimum job here as far as performance, but credit director John Hough for filming in such a way as to take full advantage of their looks. I’m not just talking the see-through nighties they wear through most of the picture. The film also takes advantage of a quiet haunting allure the pair had on screen. Hough was able to capture the essence of a performance without requiring too much from his inexperienced starlets. He also gave Peter Cushing a compelling role here that offers us more to focus on when you’re not looking at the girls.

The film is presented complete and uncut here. Most of the prints released in the past have been cut mostly when imported to America. The cuts are quite tame by today’s standards and wouldn’t get you worse than a PG-13. There is a candle scene that is more than a little suggestive during a sex scene that might still get some notice. The blood is also rather tame here. A decapitation scene is about as bad as it gets, and the camera lingers as Cushing continues to hold on to the obviously fake head for an almost amusingly long time.

Twins Of Evil is presented in its original aspect ratio of 1.66:1. The 1080p image is arrived at with an AVC MPEG-4 codec at an average 30 mbps. Of course, the film shows its age. Unfortunately, this film is never going to see an elaborate 4K restoration. With that said, there is a lot to like about this high-definition image presentation. The image is almost always crisp and clean. Colors don’t really jump out at you, with the exception of Hammer’s trademark blood. Black levels are a bit better than average. Sharpness is much improved over anything I’ve seen before now. The grain is still intact, and it still looks and feels like a Hammer film.

The DTS-HD Master Audio 2.0 is really not going to win any awards. It serves the dialog and little else. The music gets harsh at times with some slight distortion. This would have been a nice upgrade to surround. Hammer always had a very sweet foley department. Footfalls and creaking doors (or coffin lids) were always as clear as any films I saw as a kid. Purists will be happy that at least it’s intact and mostly clean.

Flesh And The Fury – X-Posing Twins Of Evil: (1:24:36) HD This comprehensive feature looks not only at the film but the changing of the guard at Hammer. It explores the exploitation years and offers insights into the changes. The original story is profiled as well as the film’s production. Our friend Joe Dante is included among the commentators.

The Props That Hammer Built – The Kinsey Collection: (23:28) HD Wayne Kinsey shows off his extensive collection of Hammer props.

There is also a Deleted Scene, Production Gallery and Trailers

Hammer is back, at least in name. Yes, they’ve put out some pretty nice horror films. Still, they just don’t make films like this anymore. While I’m at risk of sounding too nostalgic here, the truth is undeniable. With recent tragic events I’m sure the cry over film violence will once again come center stage. This is tame by today’s standards, but those cries were loud and clear in 1972. The film came and went, and no rash of violence resulted. The problem is with us not with the entertainment we choose to enjoy. Such concerns have caused many of these Hammer films to languish without good high-definition copies. Thanks to Synapse, that tide is turning. I feel confident that you can enjoy a film like this, and I’m quite sure “you won’t go around burning pretty girls”.

Gino Sassani is a member of the Southeastern Film Critic's Association (SEFCA). He is a film and television critic based in Tampa, Florida. He's also the Senior Editor here at Upcomingdiscs. Gino started reviewing films in the early 1990's as a segment of his local television show Focus. He's an award-winning recording artist for Omega Records. Gino is currently working on his 8th album Merchants & Mercenaries. Gino took over Upcomingdiscs Dec 1, 2008. He works out of a home theater he calls The Reel World. Favorite films: The Godfather, The Godfather Part II, The Body Snatcher (Val Lewton film with Karloff and Lugosi, not the pod people film), Unforgiven, Gladiator, The Lion King, Jaws, Son Of Frankenstein, The Good, The Bad And The Ugly, and Monsters, Inc.
Contest: Win Cherry Bomb on Blu-ray From Well Go USA Hijacked (Blu-ray)