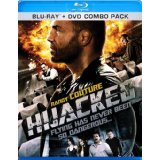 I knew this movie was in big trouble as soon as it decided to kill off its most charismatic character/actor in the first 10 minutes. Don’t worry, MMA fans: the poor soul who prematurely bites the dust is not played by UFC legend Randy Couture, who headlines this straight-to-DVD airplane “thriller” that makes you appreciate all the skill and care devoted to making even enjoyably junky action flicks like Passenger 57.

When a terrorist group known as The Tribe hijacks a luxury jumbo jet belonging to wealthy industrialist Bruce Lieb (Craig Fairbrass), they weren’t counting on having Paul Ross (Couture) as a passenger. Ross is a government agent who has been doggedly pursuing the terrorist group. The Tribe demands a suspiciously specific payment of $2.73 billion or they will start executing hostages. Among the hostages is Ross’s estranged ex-fiancee (Tiffany Dupont), because beefy action heroes have the worst luck when it comes to having cherished loved ones in peril.

Hijacked valiantly attempts to keep things interesting by throwing in some twists and turns along the way. Unfortunately, the film is severely and visibly hamstrung by its low-budget, as well as production values that make it seem like a Spike TV original movie the network never got around to actually making. For example, no amount of terrible exterior FX shots of the aircraft flying through clouds can convince us the action is taking place on a plane, rather than some soundstage. (A surprisingly fancy soundstage, but a soundstage nonetheless.) In another scene, we know a character is a CIA agent because he’s wearing a “CIA” baseball cap he seems to have bought at his local Goodwill.

Couture is a bad actor. (I’ll give you a minute to recover from the shock of that previous sentence.) There’s more personality in his cauliflower ears than in his character. The good news is his line readings and facial expressions are so atrocious they occasionally veer into the unintentionally funny zone. A few actors do manage to (barely) rise above the material. Dominic Purcell (Prison Break) successfully resurrects his badass mustache from Killer Elite as the man tasked with protecting Lieb, Vinnie Jones (Snatch) scores an intentional laugh or two as Ross’s partner, Holt McCallany (FX’s short-lived Lights Out) plays the terrorist leader with the proper amount of detached amusement, and Gina Phillips (Jeepers Creepers) is solid as Lieb’s sister, who is concerned about losing the family fortune.

Obviously, a sky-high production budget isn’t required to make a great (or even a half-decent) action film. I can forgive the idea that The Tribe would bring a measly three terrorists — one of whom is totally incompetent — to wrangle about a dozen hostages because they had a bit of help on the inside (and because they probably couldn’t pay more actors).

More unforgivable are the clumsily-staged action sequences and fights, as well as the movie waiting way too long — one hour into its 90-minute running time — before introducing an exciting Speed-on-an-airplane bomb that will be activated if the plane dips below 20,000 feet. There’s also a stunningly bad scene where two of our heroes cut a terrorist loose so she can defuse the bomb, then seemingly forget about her after they step in to work on the explosive device themselves, allowing her to grab a gun sitting a few feet away. I’m convinced director Brandon Nutt shot that scene without looking at it.

In the end, the biggest problem with Hijacked is one quickly gets the sense that even if the filmmakers had greater resources at their disposal, they’d still make a crappy movie.

Hijacked is presented in an aspect ratio of 1.78:1. The 1080p image is arrived at with an AVC MPEG-4 codec at an average of 26 mbps. The sharpness is very good in close-ups, but a bit soft around the edges in some medium shots. The video transfer does decently in distinguishing between the main action in the movie and intentionally grainy newscasts. Unfortunately, the black levels fall totally flat, which is a major problem when the bulk of a film takes place inside a plane during an overnight flight. There’s an unappealing, light grayish hue that effectively wipes out a lot of texture and detail. Contrast and color were also underwhelming, although the cast (and particularly Couture) just may be that orange. At least the cartoonishly red gun shot wounds popped impressively.

The Dolby TrueHD 5.1 track delivers the (bad) dialogue quite clearly and, um, that’s it for the positives. There’s a significant imbalance between the roof-rattling action sequences and the quieter non-action scenes mostly comprised of dialogue. You’ll be watching the movie at a regular volume, but by the time one of the movie’s shootouts is over you’ll have a noise complaint lodged against you. I’d be a little more forgiving if those loud action scenes were dynamic or detailed, but they mostly came off as oppressively loud and occasionally muffled.

Still, that wasn’t my biggest problem with the audio track. More than half the movie’s running time takes place on a plane, but you’d never know it from the speakers, which were mostly utilized to pump out the film’s generic score instead of the atmospheric sounds of an a jet engine. The movie already has a hard enough time convincing us the action is taking place in mid-air. Adding these subtle background noises would’ve helped us suspend our disbelief a little and made it easier for us to go along for the ride.

Speaking of jokes, the movie does provide its share of laughs, even if they mostly come courtesy of Couture’s “acting.” (There’s also a gratuitous sex scene tossed in for good measure.) Still, that’s not nearly enough to recommend this movie because if you spend any money at all to watch this, the joke’s gonna be on you.

Twins Of Evil (Blu-ray) Transformers Prime: One Shall Stand