Posted in: Disc Reviews by William O'Donnell on August 16th, 2012 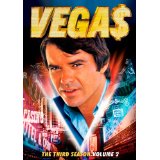 Dan Tanna is a private investigator whose home-base is on and off the mains strip of Sin City itself, Las Vegas. Every week saw Tanna in some sort of deadly adventure chasing bad guys down with his ’57 Thunderbird, or firing at them with his signature Magnum pistol.

Perhaps it was the influence of Las Vegas, that inspired many of the stories in this series to be a bit more over-the-top than a typical crime drama would venture. Sure, CSI and all their kindred programs offer up plenty of silly plots, but not all would go so far as to have stories involving partnerships with psychics, battling body doubles (on more than one occasion), and other outrageous characters. Sometimes this silliness throws a little zest into, what can sometimes be a tired genre. Sometimes though, it simply keeps the audience from fully investing in the characters. Robert Ulrich, who plays Tanna, is largely forgettable in his own series when pitted against these sorts of cartoonish villains, but he comes off as a perfectly acceptable leading man in the end.

On the plus side: there are some great stunts in this season. By “great,” I mean those sloppy types of stunts you only saw in the seventies, where you are watching someone truly cheat death and get hurt in stunts such as leaping out of a moving vehicle or plummeting through tables after a high drop with not a single wire, safety mat nor having the camera cut away.

On the minus side: the story is peppered with continuity mistakes and sloppy dialogue that shows signs of haste and lack of care when this show was being composed. The action is amusing but this show requires some stronger story telling for us to want to bother.

Fullscreen 4:3. The image is perfectly acceptable. CBS DVD does good work making sure their older films transfer nicely and VEGA$ is no exception.

English Mono (subtitles in English too). Nothing fancy happening here. The F/X have not aged too much and things are mixed decently.

Episodic Promos: These are bumpers that last only a few seconds. A one sentence plot tease plus quick cuts of the biggest action moments.

There is some fun to be had with this series, but like Las Vegas, a lot of the fun is fleeting no matter how much it sparkles.