One in the Chamber (Blu-ray) 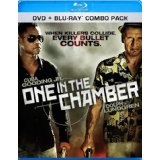 “I play chess in the park every Tuesday, Thursday afternoon. I restore cars from the ’70s, pinball machines from the ’90s, and if you pay me enough, I’ll probably kill anything that breathes.”

Pop quiz! There’s a new straight-to-DVD action flick about two highly-skilled assassins wreaking havoc in Eastern Europe: can you guess the two actors who star in this movie? If you’re an action film — or a straight-to-DVD — connoisseur, Dolph Lundgren would easily be on your Top 10 list of suspects. (Maybe even Top 2.) But how long would it take for you to get to Cuba Gooding Jr? 50 guesses? 200?

I always thought Gooding was a charismatic performer and wondered why the Oscar winner’s career had fallen off a cliff in recent years. Well it turns out the bottom of that cliff held a bunch of low-budget, totally forgettable action flicks — with titles like The Devil’s Tomb, Hardwired, and The Hit List — for Mr. “Show Me the Money.” However, just because this is what Gooding’s career looks like these days doesn’t mean I’m totally buying it; at least not when it comes to One in the Chamber.

In fact, the movie has serious credibility issues across the map. The Prague-set action film stars Gooding as Ray Carver, the “most coldly efficient assassin in the business” (at least according to the Blu-ray case). Carver is hired by the Suverov crime family to eliminate rivals who went behind their back, but failure to complete his mission makes Ray a marked man. As Ray proceeds to switch allegiances, the spurned Suverov clan decides to hire a legendary — and quirky — assassin known as The Wolf (Lundgren) to finish what Ray couldn’t (or wouldn’t), putting the two trained killers on a collision course.

Ray’s alleged ruthlessness is undermined almost immediately when his refusal to kill an innocent bystander leads to him botching his assignment and barely escaping with his life. I get that we’re eventually supposed to root for this guy, but it’s not a great first impression from someone who’s supposed to be the best in the business. It’s just as well because I don’t think the cold blooded killer persona works to Gooding’s strengths as an actor. Occasionally, we get bits of morose voiceover narration featuring Ray quoting Bible passages — the hitman is haunted by a past job — that sounds as if Gooding is about to fall asleep. The actor only seems to come alive when he’s flirting with Janice (Claudia Bassols), a woman who Ray takes an interest in.

Lundgren fares considerably better and is the main reason to watch this movie. After starting his career as an over-sized Russian robot in the ’80s (Rocky IV, Red Scorpion), Lundgren has been given the chance to show off more of his personality. I’m not saying Lundgren should start working on his Oscar speech anytime soon, but he plays Aleksey — who hates being called “The Wolf” — with aplomb and the sort of light touch this dopey action flick needs. Of course, the actor is still as big as a door (characters in the film are probably too scared to make fun of his tacky Hawaiian shirt and goofy fedora to his face), so his action scenes mostly consist of him walking around at a deliberate pace — there must be a lot of mileage on that body — and basically smacking people around.

Director William Kaufman — who collaborated with Gooding on The Hit List — is often embarrassingly bad when staging shootouts or fights while relying on every action/crime movie cliche in the book, even when it’s not necessary. I particularly liked the part where a henchman handed someone a phone and said, “Boss, it’s Mikhail Suverov”, followed by one of those stylish title cards identifying Mikhail Suverov. (Wow, thanks! I wouldn’t have known otherwise.) Ray also wears a black hoodie early on for no other reason than to make it easier to sub in a stunt double for Gooding when the character falls off a building. Although there were a few moments (the fight between Ray and the Wolf; a couple of cool stunts) that made me think Kaufman could one day direct a stylish, enjoyably trashy action movie I might actually like, every aspect of One in the Chamber — the acting, the dialogue, the look of the film — has an undeniably amateurish feel to it.

It’s too bad because, believe it or not, I think this movie had potential. The story of two assassins racing to complete their respective assignments and eventually facing off could have been interesting. Unfortunately, the movie shoehorns in an unnecessary love interest and spends too much time lending too much weight to the feuding crime families. Andrew Bicknell and Louis Mandylor are actually pretty good as the dueling mobsters, but we don’t really get to know or care about either of them. It makes no difference to us which one wins and which one gets wiped out by Ray and The Wolf. Now that I think about it, Ray and The Wolf would’ve been a more interesting title.

One in the Chamber is presented in its original aspect ratio of 1.78:1. The 1080p image is arrived at with an AVC MPEG-4 codec at an average of 28 mbps. Prague — actually Bucharest, where filming took place — looks pretty darn good in this transfer. The Blu-ray boasts a sharp picture with solid blacks, really good colors and impressive detail. The disc also handled different film stocks nicely. (Grainy intro cards for the inconsequential mobsters, as well as black-and-white flashbacks.) There’s a bit of shimmering, but most of the problems seem to be a result of shoddy directing rather than a bad video transfer.  (Stock footage and establishing shots that looked considerably worse than the rest of the movie; a pickup shot of a cell phone detonating a bomb that looks like it was filmed with a cheap flip cam.)

The Dolby TrueHD 5.1 track is about as subtle as Dolph Lundgren’s shirts in this movie. The action sequences — particularly the gunfire — pack exactly the sort of wallop you’d expect from a big, dumb action movie. Not the most dynamic track I’ve ever heard, but I’m not exactly shocked they went over the top with this one. The dialogue comes through cleanly enough, but I found I had to turn it up more than usual for it to be totally audible. My biggest disappointment is that Kaufman and company chose to highlight the film’s thudding score rather than giving us some of Prague’s/Bucharest’s atmospheric sounds.

One in the Chamber: Behind the Scenes: (9:45) This featurette — presented in standard definition — mostly consists of on-the-set footage of action scenes being filmed with an occasional split-screen comparison to the finished product. Gooding and Lundgren turn up briefly, and Lundgren talks about how he was attracted to the script about dueling assassins who start out as adversaries and grow to respect each other. I agree! I wish they’d made that movie instead of Russian Family Feud.

Like almost any other cut-rate action movie, One in the Chamber is good for a few laughs. (Some of them even intentional, thanks to Lundgren.) Unfortunately, the clumsy action is neither violent nor stylish enough to please most fans of the genre. More importantly, a promising story gets buried under too much unnecessary muck and too many cliches cribbed from much better films. Unless you’re a Dolph Lundgren superfan/completist, I’d recommend you skip this one.