Posted in: Disc Reviews by Brent Lorentson on August 15th, 2012 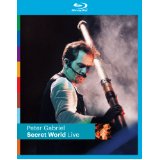 I can still remember the day I first rented the movie Say Anything from the mom and pop video store that I used to hang out at through most of my childhood.  It was a movie that stuck with me over the years, and it was that movie that introduced me to Peter Gabriel because of the infamous boom box scene.  Ever since that movie “In Your Eyes” has been what I equated to the go to song to play for a girl any time I do something stupid (which is often) or when I say something stupid (happens more often).  And for those of you old enough to remember when MTV actually played just music videos, it was hard to resist the awesomeness of the animated video Gabriel had for “Sledgehammer”.  I wouldn’t call myself a super fan of the artist, but “Solsbury Hill” is one of those songs that could squeeze into my desert island top 10 songs if I was forced to actually make a list of favorites.  So needless to say, when given a chance to review this concert I took it with open and eager hands.

When I put in the Secret World Live Blu-ray,  I expected to get a well-shot concert with some good live performances, but instead I got so much more.  This isn’t simply a man with his band belting out a few hits.  This is a production filled with elaborate production numbers that take place on two stages with a long catwalk connecting the two.  From the moment Gabriel emerges from a red telephone booth to perform “Come Talk to Me”, the man sets out to put on a show for the audience that is simply incredible.  The opening number, done as a duet with a young Paula Cole, is beautifully choreographed, and this is only the beginning.

As a transition for Gabriel to move from the main stage to the smaller stage at the center of the arena, the man does not simply walk, but instead mimics the act of rowing across a river with the help of a giant oar and a conveyor belt.  Sure there are people that will see this as a bit much, but I appreciate the effort put in the production here.

My one complaint comes with the dancing that accompanies the singing.  It’s better than having the performer just standing around and singing, but the dancing is a bit on the hokey side and can be a little distracting.  This I’ll just blame on personal preference and being filmed in the early 90’s.

The director Francois Girard (The Red Violin) does a good job at capturing the performances as well as the scale of the stage show.  When this was shot, digital was not an option, so they ended up shooting the performance in 16mm, which does lend to some beautiful cinematography, but there just isn’t the detail we’ve gotten used to, which isn’t a bad thing.  Where they took a big chance, and where I appreciated the approach, was while performing the song “Digging in the Dirt”. The camera is mounted to face Gabriel in an unflattering extreme close up.  With reality TV we’ve seen this shot before, but this was 1994, and I appreciated the lack of vanity taken here to try to enhance the experience of the song.

The show closes with an extended version of “In Your Eyes” that had me envious of the audience getting to hear this live.  I love my home theater setup, but really nothing can compare to being there in the crowd watching the performance yourself.  But this Blu-ray does come pretty close to the real thing.  For fans this is pretty much a must buy, but for those not too keen on the former Genesis front man, you’ll maybe want to pass.

Come Talk to Me

Washing of the Water

Digging in the Dirt

Peter Gabriel: Secret World Live is presented in an aspect ratio of 1.78:1.  The 1080i image is arrived at with an AVC  MPEG-4  codec at an average of 28mbps.  Considering this was shot on 16mm this does look good.  Eagle Rock Entertainment did what they could to bring the best visual experience they could to the Blu-ray, but considering the source material is from 16mm negatives there is only so much that can be done.  The images at time look a little hazy, and there were a few moments where the pixilation was simply horrid.  This didn’t happen but a few times, but when it occurred it is jarring.   This isn’t the HD quality sharpness we’ve grown used to with recently-shot concerts.  But being fair, considering the source material what we got could have been worse.

As though to make up for the flawed video, we are rewarded with amazing audio.  The DTS-HD master audio in 5.1 is beautiful and the highlight of the Blu-ray experience here.  Gabriel’s and Cole’s vocals coming from the front speaker sound warm and clear.  It’s well mixed with no parts overplaying the others, nor is there anything imposing to assault the ears.  There is also a LPCM stereo track which is the default track for the disc.

Red Rain (6:20) A bonus track not included in the performance part of the disc.

The Making of Peter Gabriel’s Secret World Live: (15:13)  A making-of segment with an interview with Peter Gabriel talking about how he got the concept of getting the Secret World stage show together.  Also we get a peek at how he discovered Paula Cole and had her come in as a vocalist for the tour.  Hearing him discuss the intricacies of the show was pretty insightful, but only for the fans that just can’t get enough.

Time lapse: (3:12) Here we get a time lapse glimpse into everything that went into constructing the elaborate stage and getting it concert ready.

Quiet Steam Gallery: (6:25) Still photos from the concert and tour put together as a remixed ‘Quiet’ version of “Steam” plays.

Rhythm of the Heat: (6:01) A promo for a feature Eagle Rock release.

Before watching this I wasn’t a huge fan of Peter Gabriel, but now I have a little more appreciation for the guy and his music.  Seeing Paula Cole before she had her hits like “Where have all the cowboys gone” and “I don’t want to wait” was a treat, but it wasn’t the selling point.  What did sell me on this release was just how good of an entertainer Gabriel is and the effort he put into making this more than just a concert should be applauded.  The guy has got some pipes and knows how to write some great music.  It did make me feel a bit old recalling the days of actually using a lighter instead of cell phone, but a little nostalgia never hurt anyone.

Brent Lorentson is a horror writer and film critic based out of Tampa, Florida. With a BA in Digital Film, he co-wrote and co-directed Scavenger Hunt. His short stories have appeared in various horror anthologies. In 2019 his short script Fertile Blood will be a part of the anthology horror film Slumber Party. He is currently working on his first novel A Dark and Secret Place set to be released in late 2019. Favorite Films: Taxi Driver, Fight Club, I Saw the Devil, The Wild Bunch, Dawn of the Dead, A Clockwork Orange, Pulp Fiction, Heathers, The Monster Squad, and High Fidelity.
Pawn Stars: Volume 5 VEGA$ – The Third Season Volume 2