Posted in: Disc Reviews by Michael Durr on August 24th, 2012 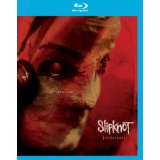 My wife listens to a lot of different music. We share some bands, but we do vary quite a bit. So normally, even if I have not heard the band before, I ask my wife whenever we here at Upcomingdiscs receive a new music disc. In this case, I had already known the band but it was a curiosity for me at best. My wife I come to find out though is a huge fan of Slipknot which leads us to our music Blu-Ray review: Slipknot: (sic)nesses. Let us see what really “heavy” metal is all about.

Slipknot was formed in 1995 out of Des Moines, Iowa. The founding members were percussionist Shawn Crahan and late bassist Paul Gray. The original name of the band was actually the Pale Ones. It was only after Joey Jordison (main drummer) suggested a name change in 1995, that the real Slipknot was born. Later in the same year they began recording material at SR Audio, a hometown studio. The album was self-financed and with only forty thousand between them, things were not going to be easy.

Early recordings and an EP did not generate much interest for the band. It was really not until Corey Taylor joined the band in 1997 and they produced a second demo, that things started to take shape. In June of 1998, Slipknot finally received the record deal they were looking for from Roadrunner Records. Their debut self-titled album would eventually reach double platinum. Subsequently, their sophomore effort in 2001 named Iowa would also reach platinum status.

However in 2002 after flirting with a great deal with fame, they decided to go on hiatus with several members taking on side projects. There was even talk of a split, though nothing materialized. But by early 2004, the third album was finished and a world tour was scheduled to promote it. Vol. 3 (The Subliminal Verses) was released in May of 2004 and went all the way up to number 2 on the charts. It would reach platinum and produce six singles including Duality and Before I Forget.

Despite the success and winning a Grammy Award for Before I Forget (Best Metal Performance), the band went on hiatus again in 2006 to tackle numerous side projects. This brings us to the fourth album, All Hope is Gone which was finished in June of 2008. The album produced five singles including the mega popular Psychosocial and Dead Memories and debuted number 1 on the Billboard charts. Again, no surprise this album hit platinum and is the source of this Blu-ray we are taking a look at today.

This Blu-ray was actually a dvd a couple of years ago in 2010. It was a recording of the 2009 Download Festival where Slipknot was a headliner on June 15th in Donington Park. This was a tremendous concert but the performance took on a different memory after Paul Gray was found dead in a hotel room on May 24th, 2010. It was later determined that Gray had died due to a morphine overdose, however it shook the band to its very foundation.

So what we have before us is the perhaps the last recorded performance of Paul Gray. Hence, the disc in addition to providing a hard pounding rock concert also features a tribute to Paul Gray. But how does the concert look and sound? The best word for it would be amazing. My only experience with Slipknot to this point had been playing them in Rockband or listening along with my wife to a CD. But what I ended up with was a completely new appreciation for the band.

Slipknot is basically a nine member band (eight now with the passing of Paul). Corey is the lead singer, and then we have several guitarists, a main drummer, a couple of custom percussionists and even what could be described as a DJ who handles turntables. It is a complete spectacle and something that absolutely does no justice listening to it on a cd. All of the members also wear masks to represent their personality and draw away from the fact that they are individuals and instead point the focus to the overall band.

Music is loud and heavy here and even though this could be confused with speed or death metal (it certainly has elements), there is a much deeper undertone to the songs. The music has a layered effect and despite its critics is actually what heavy metal should be all about. Slipknot as a band has a completely wonderful raw sound and this concert will please diehards and newcomers alike.

The video is in 1.78:1 widescreen presentation in 1080i resolution. The video is very good here, there is ample footage of just about every band member. There were only a few times where the lights played with the shot and made things blurry. I am only taking off a point to protest the pixilation of the faces when a female in the audience decided to bare her breasts (which were quite frequent). We must set standards people! Oh those wonderful English people.

For the audio portion, we get a 5.1 English DTS-HD track (PCM 2.0 track also included). This concert was released on dvd about 2 years before the Blu-Ray came out. The main criticism of the dvd was that the audio was flat at best. Suffice to say, they have increased the volume and quality ten-fold here. It is not perfect, but this is the best you can listen to Slipknot without attending a concert in one of the first few rows. Blistering rock and roll guaranteed to piss off your neighbors. Subtitles (only for the Bonus features) are included for English, Spanish, and French.

Slipknot has not really attempted to make new music since the passing of Paul Gray. They have done some tours recently and looks like they will continue to do so intermittently at least. It is also possible that Corey Taylor might not be the lead singer if they do produce a new album. It is hard to say, and the future of the band is far from certain. This blu-ray before us might be the best way to enjoy the band at arguably the height of its fame and intensity.

There is some really great audio and video here and even a nice assortment of extras for us to go to. It is a perfect companion piece to the 4th album and this will probably be the last recorded concert with Paul Gray at least on the official level. Super easy recommendation for the diehards. Fans of heavy metal will also dig this quite a bit. Slipknot is not for everybody but those who are willing to listen will be rewarded with some of the hardest riffs and they really do have a fantastic live show.

Michael Durr has been reviewing movies for the better part of fifteen years now. He primarily enjoys thrillers, sci-fi, animation and even a little courtroom drama. His favorite films include Escape from New York, the Goonies and anything with Alyssa Milano. When he’s not praising Kurt Russell as the greatest actor of our time or scratching his head over a David Lynch flick, he’s spending time at home in Texas with his lovely wife, Lori and his amazing son. How they put up with him is a mystery, but even Basil Rathbone doesn’t have the time to solve that one.
Premium Rush The Viral Factor (Blu-ray)