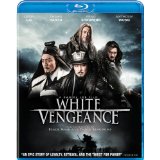 White Vengeance assumes a certain level of knowledge about ancient Chinese history that, except for all you ancient Chinese history scholars reading this review, most of us don’t have. As a result, the film’s disorienting opening act had me constantly backtracking to figure out who was who, and why they were betraying or trying to assassinate each other. In other words, I started to feel like getting to the end of this ambitious movie might take a little under 2,000 years.

The film depicts the Feast at Hong Gate — also known as the Hongmen Banquet — an important historical meeting outside Xianyang, the capital city of the Qin Dynasty, between Xiang Yu (Feng Shaofeng) and Liu Bang (Leon Lai). Xiang and Liu were respected leaders of separate insurgent forces rebelling against the Qin Dynasty, and the two men competed to seize control of Xianyang. (2,000-year-old Spoiler Alert) Liu Bang got there first and eventually became the founder of the Han Dynasty, as well as its first emperor.

The events I just described are well known in Chinese lore — there’s even a framing device involving a teacher taking a group of students on a field trip and getting the real story from a mysterious stranger — so White Vengeance seeks to delve deeper into the life-sized personalities involved in this famous clash. It’s not surprising (or even particularly bothersome to me) to see that writer-director Daniel Lee (Three Kingdoms: Resurrection of the Dragon, Black Mask) has taken some creative liberties with the material. I just wished the creative liberties enhanced the story, rather than hindering it.

For example, I’m not totally opposed to the inclusion of a love triangle involving Xiang Yu, Liu Bang and a woman named Yu Ji (Liu Yifei). (In real life, the romance between Xiang and Yu Ji — better known as Consort Yu — inspired the Peking opera Farewell My Concubine.) The problem is the entire storyline is totally underwhelming and the triangle almost completely two-sided. As lovely as Yifei is, you could’ve edited her completely out of this movie and not lost very much. I also didn’t care for the occasional implementation of wire fu during battle scenes. It just seemed silly (like a pro wrestler taking an exaggerated bump) and not nearly as effective as the more realistic fight sequences, especially those involving Andy On as Han Xin, the “undefeated general.”

Where Lee shines is in sumptuously recreating the era with impeccable costumes and incredible sets. Even the use of CGI for bird’s eye views of the battles was well done. However, my favorite part of this film involved the military scheming between Xiang and Liu’s respective advisors.

The battle of wits between Zhang Liang (Zhang Hanyu as Liu’s advisor) and the older Fan Zeng (Anthony Wong Chau-Sang as Xiang’s mentor) is effectively dramatized by presenting it as a game of Weiqi (better known as Go). To be honest, I found the showdown between the two advisors more compelling than the battle between Xiang and Liu. The two actors who play the protagonists are quite good on their own. Shaofeng is dynamic and appropriately larger than life as the fierce, prideful Xiang. Lai is sturdy as Liu, though I really wish we’d gotten more than a glimpse of that character’s paranoid side once he came into power and became keenly aware of all the treachery around every corner. Still, I found the connection between these two important figures to be quite lacking. After a strong middle section, the 138-minute film staggers to an extended conclusion when it had the chance to finish on an effective, emotional note.

In the end, White Vengeance — which is, surprisingly, not an action movie from the late ‘80s starring Jean-Claude Van Damme and Jesse Ventura — is the muddled cinematic equivalent of an Impressionist painting: it’s meant to capture the essence of its subject rather than providing an accurate portrait. And though it looks pretty from afar, it’s as messy as its characters’ lives when you look closer.

White Vengeance is presented in its original aspect ratio of 2.40:1. The 1080p image is arrived at with an AVC MPEG-4 codec at an average of 32 mbps. I alluded to this before, but this video transfer is terrific and absolutely does justice to the luscious visuals Lee put on film. (Though I wish the director had taken that same level of care with his camera work, which included some intentionally shaky pans and zooms.) Black levels are generally strong, though I detected a slight gray hue in the background of a couple of scenes. The colors pop nicely without looking cartoonish, and the image is exceedingly sharp. Close-ups are particularly good and provide an impressive amount of texture. (I’m thinking of the black fur on Xiang’s coat.) The only bad part of the video transfer is that the wider panoramic shots (usually right before a battle sequence) had a soft, unnatural sheen to them. Then again, the main reason I noticed that is because the rest of the movie looks so good.

The DTS-HD Master Audio 5.1 track is predictably powerful and, not surprisingly, truly comes to life during battle scenes. The clanging of swords dominates the speakers during these sequences, but I was most impressed by the sound of galloping horses on the low end. Though the track features a nice balance between the score and Mandarin dialogue, I felt like they sometimes overdid it with the sound effects. (Especially every time someone unsheathed their sword, which was often.) There are also more than a few instances where the subtitles fly by way too fast for a human being to read. (There is no English dub.) Overall, this track effectively pumps out the big sounds for this epic-sized tale. There is also a Dolby Digital Stereo track in Mandarin.

Behind the Scenes: (54:27) I think it’s cool to see on-the-set footage of stunts being filmed, if only to compare it to the glossy finished product. I suppose it’s also amusing to see the actors attached to wires and the fake horses the rode in on. But giving us almost an hour of this stuff (which becomes monotonous after about three minutes) is way too much!

Interviews with Cast & Crew: (36:03) We get comments from the main cast and director Daniel Lee, who talks about how he always wanted to film this story. The most interesting comments come from Anthony Wong Chau-Sang, who notes that Easterners don’t look down on scheming the way Westerners do. Decent insight here, but a lot of it is repetitive and this feature definitely could’ve been trimmed.

White Vengeance accomplishes the tricky feat of feeling both too long and underdeveloped. The film provides some moments of unimpeachable beauty — wonderfully brought to life by this Blu-ray — but it also features a wan romance and some unnecessarily silly action. Besides the audio/visual presentation, this one gets a slight boost as a home video presentation because you’re able to re-watch and catch stuff you may have missed the first (or second) time.

I feel like Lee would benefit from directing someone else’s script because I get the impression the filmmaker has a great movie in him. Unfortunately, this one isn’t it.