Posted in: Disc Reviews by Michael Durr on September 10th, 2012 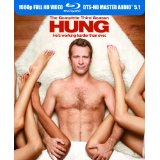 Remember when I mentioned the difficulty of reviewing a season in the middle of the show’s run? This week, I shall attempt to review two different HBO shows at the end of their respective run. Yes, I will be piecing together a show that is in its last season with very little (or no knowledge) of the seasons before. This should be a fun ride and our last entry is the third season of the HBO Comedy: Hung.

Our very own M.W. Phillips was able to review the second season of this show, so feel free to check that out.

They say that necessity is the mother of invention and that often times one has to make lemons into lemonade. That fact could not be truer than at the Wellness Center for Women ran by Tanya Skagle (played by Jane Adams). Today’s subject is about Orgasmic Living while Ray Drecker (played by Thomas Jane) handles private consultation.

But just three months ago, Tanya was working at a Starbucks and Ray was doing substitute teaching. They put their minds together and hatch a great plan to open up a wellness center for women. However, the banks aren’t buying and after eight straight rejections, they are ready to give up. But after two of the bank employees have a personal consultation with Ray, the Wellness Center is able to open for business. By the way, Ray is a gigolo and gets paid for his services, Tanya is his pimp.

So, work is going well and the clients are numerous. Ray is able to fix up the house despite his ex-wife, Jessica (played by Anne Heche) being skeptical of the new found money windfall. However, his two children, Damon and Darby (played by Charlie Saxton and Sianoa Smit-McPhee) are more than happy to be the benefit of Ray’s generosity.

Meanwhile, Lenore (played by Rebecca Creskoff) is sitting at a diner when she sees an ad for the Wellness Center. Furious that she had came up with the idea first, she slams down her paper. A busboy named Jason (played by Stephen Amell) comes by to get her dishes as Lenore looks up. One look soon leads to an incident in the bathroom and it looks like Lenore has herself a new gigolo. In another part of the city, Ray has bought himself a Mustang and he rides off with financial freedom on his mind.

The main stories of the third season have to do with some healthy (and not so healthy) competition. In addition, Tanya finds herself a lover/business partner in Charlie (played by Lennie James). Eventually the business expands to decent and not so decent results. The season is a whirlwind of roller coasters as Ray and Tanya try to keep their wellness center a float.

This season despite my lack of knowledge for past seasons delivered a punch without leaving new viewers in the dark. I’ve always enjoyed Thomas Jane in pretty much any role he takes on and this is no exception. Jane Adams is equally interesting and despite her clumsiness, we really get a sense of her caring for Ray in an almost motherly fashion instead of the prototypical pimp/gigolo relationship.

Lenore Bernard also plays a suitable antagonist as she really knows how to get Ray or Tanya in situations over their head. The array of clients that Ray takes on are especially diverse which was equally appreciated in what I was wrong to assume would be the standard model bimbo. My only disappointment was probably in the Jessica character as I have never quite understood Anne Heche’s appeal. This is probably because she one hundred percent acts like a prototypical blonde floozy.

The video is presented in 1.78:1 anamorphic widescreen at 1080P. This is the usual strong video from the people at HBO Home Video. We certainly get plenty of eye candy in this show and the show’s many frequent night scenes help to show off the 1080p definition. The color is also exceptionally good and for the moments that need a great deal of detail, episode seven for example, we can see through Ray’s eyes. There are no complaints to be had here.

The audio is presented in 5.1 English DTS-HD (French DTS 5.1 and Spanish 2.0 DTS mix also included). This is not a high action show (well physical action…err…I mean nobody blows up…err….ahhh forget it), but the dialog is splendid and comes in crystal clear even during those high intensity scenes. The sound field is very dynamic and there are plenty of surround effects to go around. All in all, this is a well rounded show in both audio and video. Subtitles include English SDH, French, and Spanish.

Like Bored to Death, this series was cancelled on December 20th, 2011. Perhaps also in similarity, it is unfortunate that Hung has outlived its usefulness. I deeply enjoyed the third season and the range of characters and clients. However, the story only had so many ideas and can only go so many places without being overly repetitive. But all in all this is a great example of a show that can be quite risqué and provide great stories at the same time.

The discs are also a fine example of how televisions should be put onto disc (those with bare bones presentations take note). The video and audio are excellent and there is a broad array of extras to tide over any fans thirst for more content. It is easy to give this show a recommendation for its entire run in fact. It is unfortunate that the show ended but at least it left at its height of the run. Great adult show all around.

Episodes
Disc One
Don’t Give Up on Detroit or Hung Like a Horse
Take the Cake or Are You Packing?
Mister Drecker or Ease Up on the Whup-Ass
F*** Me, Mister Drecker or Let’s Not Go to Jail
We’re Golden or Crooks and Big Beaver

Disc Two
Money on the Floor
What’s Going on Downstairs or Don’t Eat Prince Eric!
I Sandee or This Sex, Which is Not One.
A Monkey named Simian or Frances is Not a Fan
The Whole Beefalo

Michael Durr has been reviewing movies for the better part of fifteen years now. He primarily enjoys thrillers, sci-fi, animation and even a little courtroom drama. His favorite films include Escape from New York, the Goonies and anything with Alyssa Milano. When he’s not praising Kurt Russell as the greatest actor of our time or scratching his head over a David Lynch flick, he’s spending time at home in Texas with his lovely wife, Lori and his amazing son. How they put up with him is a mystery, but even Basil Rathbone doesn’t have the time to solve that one.
Goats (Blu-ray) Dinosaur Train: Big, Big, Big