Posted in: Disc Reviews by William O'Donnell on September 10th, 2012 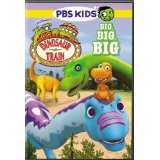 Geared towards pre-schoolers, and their fascination with dinosaurs, this show teaches us about dinosaurs, one at a time, in 10-minute episodes. A group of young dinosaurs, eager to learn, travel on a magical train through time to meet the dinosaur highlighted in their episode.

This particular DVD collection focuses on the biggest of the dinosaurs, the sauropods (long neck behemoths). The lack of variety might hinder whatever education this show is wishing to tender to it’s young viewers. Making a dinosaur one neon colour versus another doesn’t do enough to distinguish each beast. There are unique mini-adventures attached to each lesson but there is hardly enough narrative or even gags for children to be grabbed by this. If your child happens to be a huge fan of this type of dinosaur…then by all means, feed them this assembly line of incredibly similar beasts.

Honestly, this show isn’t much more than a mashing of bright colours that are there to dance in front of a toddlers eyes, occupying their developing brains long enough for mom and dad to have a coffee break.

Fullscreen. The animation is flat (had he been alive, Jim Henson would not have allowed his name to be attached to this the way it currently is) but there the colours appear without much fading in the transfer to DVD.

Dolby Digital Stereo. With little to no special f/x to highlight, Surround sound isn’t really missed. The voices are a touch shrill at times, so I could both praise and condemn the clarity of the Stereo sound offered.

Dr. Scott the Paleontologist: Segments about the same dinosaurs covered in the episodes. An actual Paleontologist offers facts that are far more informative (and far more interesting) than what is contained in the actual episodes.

Insert the disc into a DVD-Rom and you get the following Features on your computer:

“How Big Are You?” Interactive game for kids.

Information for parents:
-Meet the characters
-About the Program

Here’s how to sell this DVD: if you want children into it, get them into dinosaurs…siple as that. If you want grown-up stoners to buy it, tell them it is actually about dinosaurs riding a magical train.