Posted in: Disc Reviews by Gino Sassani on September 18th, 2012 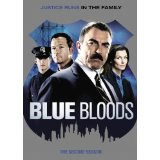 Tom Selleck is Frank Reagan. He’s the police commissioner of the NYPD. He’s no stranger to the job. In fact, police is the Reagan family business. His father Henry (Cariou) was the commissioner before him, who was fired for his brutal honesty and straight talk. His father is a constant reminder that the job is not always just about policing the city. There are politics to deal with no matter how hard he tries to avoid them. His son Joe was killed in the line of duty. His elder son Danny (Wahlberg) is one of the force’s best detectives. His youngest son Jamie (Estes) is a brand-new recruit on the force. He has a Harvard law degree, but he decided to give up the idea of a law practice to go into the family business. Daughter Erin (Moynahan) is not a cop. But, that doesn’t mean she’s out of the loop. She is a lawyer who works for the DA’s office. When the Reagans gather for their traditional Sunday dinner, the family chatter often involves dead bodies and hard criminals.

Each week there is the traditional case-of-the-week format. Danny and his partner Jackie (Esposito) might catch a murder case, or Jamie and his training officer Renzulli, played by NYPD Blue vet Nicholas Turtorro, might have a run-in with a criminal. The cases get played out pretty much the way a normal cop show might play, and then there is the family dynamic. Cases might cause friction and stress between the family members. Here is where the performances and strong characters make this a very different show from the rest of the police dramas out there.

There’s just enough of the mythology arc to keep things interesting. The stories are usually stand-alone, and you will enjoy this slightly different take on the cop show.

The second season finds the show hitting its stride. The best arc of the season has Jamie going undercover with a vicious mob family. He saves a guy’s life while on a routine drug undercover, which gets him into the mob family. I would have liked to have seen more time dedicated to that story. Of course, it’s a bit far-fetched. The kid is the son of the Police Commissioner, and this family is supposed to be very cautious. I can’t believe his face wouldn’t be immediately recognizable. It’s a bit of a thin credibility line, but good drama nonetheless.

The city has a new mayor, and it does create some awkward moments for Frank as he has to decide if it’s time to pack it in. Erin meets a new guy who might just be an international art thief. Danny’s having more troubles with his marriage due to the stress of the job. One of the best episodes of the season finds him in hot water after shooting a suspect who turns out to be a cop. It’s a good shooting, but his earlier temper flares might be what land him in hot water. Tony Bennett shows up with Carrie Underwood in the season opening episode. It’s really a short scene, but pretty cool anyway. The final episode of the season has New York under a terrorist threat.

Each episode is presented in its original broadcast aspect ratio of 1.78:1. For the most part, it’s a solid presentation. Colors are fairly natural, and the image is about as sharp as anything else coming from television DVD. Because they stick with just four episodes on a disc, you’ll get a more solid bit rate, and compression won’t be so much a problem. That means somewhat better-than-average black levels.

The Dolby Digital 5.1 track isn’t going to be all that immersive. Surrounds are relatively quiet. This show is more about the characters, so dialog is what’s important here.

On Set With Donnie and Will: (4:23) The two actors take you behind the scenes and show some love to the crew who work on the show.

Keeping It Reel – Season 2: (8:41) Another look at the authenticity of the show.

A Higher Standard – The Story Of The Reagans: This is split into two parts (19:14 & 22:11) for royalty reasons. It’s an episode by episode break down of the season.

9/11 had its 10th anniversary during the season, and the show does find ways to honor the event. They do it with a moving story about Frank’s old partner who finally dies from injuries he sustained in the North Tower that fateful day. It brings about a time of reflection for Frank that does the fallen heroes justice. The show continues to honor the police force it represents, infusing that sense of honor in the stories themselves. It’s no wonder the show was one of the top shows over the last two years. “I’m not a big believer in coincidence.”

Gino Sassani is a member of the Southeastern Film Critic's Association (SEFCA). He is a film and television critic based in Tampa, Florida. He's also the Senior Editor here at Upcomingdiscs. Gino started reviewing films in the early 1990's as a segment of his local television show Focus. He's an award-winning recording artist for Omega Records. Gino is currently working on his 8th album Merchants & Mercenaries. Gino took over Upcomingdiscs Dec 1, 2008. He works out of a home theater he calls The Reel World. Favorite films: The Godfather, The Godfather Part II, The Body Snatcher (Val Lewton film with Karloff and Lugosi, not the pod people film), Unforgiven, Gladiator, The Lion King, Jaws, Son Of Frankenstein, The Good, The Bad And The Ugly, and Monsters, Inc.
The Virginian – Complete Season Six Lola Versus (Blu-Ray)