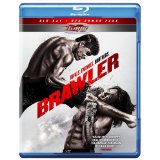 They say blood is thicker than water. Both of those substances are on display in Brawler, which cannily stages its bloody, illegal fights on a New Orleans riverboat. The film’s plot was inspired by a real-life pair of feuding brothers who infamously came to blows, but the Big Easy practically shares top billing with the squabbling siblings.

At the start of Brawler, we get to see Charlie (Nathan Grubbs) and Bobby (Marc Senter) Fontaine in separate fights. Those fights also serve as a shorthand introduction into their personalities: older brother Charlie has a more workmanlike approach, while Bobby is a ruthless showboat. Charlie and Bobby are the sons of a legendary fighter who we never get to see.

Early on, the brothers are living it up — we’re talking sex, drugs and rock and roll jazz (remember, this is New Orleans) — but Charlie leaves the fight game behind after suffering a debilitating injury. He settles down and marries Kat (Pell James), who used to come watch him fight. Meanwhile, Bobby is as volatile as ever as he gets involved with drugs and runs afoul of a local mobster. Bobby starts living/hiding in Charlie and Kat’s house, but is pathologically unable to stay out of trouble. Eventually, the once-inseparable brothers are put on a collision course.

Even if the Blu-ray cover for Brawler didn’t show Charlie and Bobby mid-combat, the movie makes it painfully obvious that the two brothers are going to face off before the closing credits roll. (In the first 10 minutes, Bobby randomly tells Fat Chucky, an effeminate fight fan played by Bryan Batt of Mad Men, “You know I beat him, right?” when they’re talking about Charlie.)

Fortunately, there is some subtlety to be found in other parts of the film. (A tense scene between Bobby and Kat was executed brilliantly, for example.) Brawler is directed by Chris Sivertson, who is lucky to be directing anything these days after helming the Lindsay Lohan stink bomb I Know Who Killed Me. (I was convinced Sivertson and Lohan had adjacent cells in Movie Jail. Though I guess Lohan should probably be more concerned with staying out of real jail.)

Here, Sivertson lets the story — if you could even call it that — unfold in a free-form, natural way that often matches the messiness of the characters’ lives. Usually, a filmmaker doesn’t want the word “messy” attached to his or her movie, but in this case the roughness and squalor — complemented by the beaten-down beauty of New Orleans— fits the material quite well.

Still, the film isn’t without its problems. Although the fight sequences — stylish without overdosing on gimmicky cinematic tricks — are quite strong (more on them in the Video and Audio section), some of the scenes where the characters are sitting around talking at the dinner table or at a bar feature acting that is painful or flat-out bad. (One of the perils of going for a “naturalistic” vibe.) Fortunately, Brawler is smart enough to sprinkle in plenty of confrontations (both physical and verbal) into its 84-minute running time.

Grubbs, who also co-wrote the story with Sivertson, is the main culprit in the bad acting department. Still, he at least looks the part of a fighter and is a New Orleans native who undoubtedly helped contribute to the film’s authentic atmosphere. Senter fares considerably better, but he also has the flashier role. We see that Bobby can be charming when he wants to be, but the character doesn’t give us a whole heck of a lot to make us root for Charlie to save or forgive him. Senter portrays a thoroughly unlikable scumbag with panache. Meanwhile, James probably does the subtlest work in the movie as a woman who realizes she is not married to the same man she fell for.

Brawler may deal in certain clichés (responsible older brother, screw-up younger brother), but the movie eschews the usual sports movie road — which is taken by plenty of films that are quite good like Warrior — and carves out its own downbeat path. Best of all, the film is an extreme dramatization of that familiar feeling where we simultaneously want to save and kill a family member.

Brawler is presented in its original aspect ratio of 2.40:1. The 1080p image is arrived at with an AVC MPEG-4 codec at an average of 29 mbps. The transfer certainly isn’t pretty, but that’s what I really liked about it. The muted and desaturated palette — especially during the in-ring scenes — reflect a city that, like Charlie and Bobby, has taken it on the chin and been drained of some of its color. (It also makes the rare pops of color, like Bobby digging up materials to make a mint julep, stand out.) It’s no surprise that the image is consistently and appropriately grainy to reflect the rough surroundings. It’d be weird if everything were squeaky clean and looked totally sharp. I would’ve liked to have seen more consistent black levels (especially since so much of the movie takes place in dark/interior spaces), but the transfer provides nice detail and is solid overall.

The DTS-HD Master Audio 5.1 track comes alive, not surprisingly, when two characters are beating the crap out of each other. The nifty sound design made it seem like the crushing body blows were coming from my side (or the rear channel, at least). The ever-present, New Orleans-flavored soundtrack sometimes overwhelmed the dialogue, which was often difficult to understand. It doesn’t help that these characters don’t exactly enunciate.

I really would’ve liked to have gotten any sort of insight as to how Grubbs, Sivertson and Co. developed this story and how they incorporated the city of New Orleans. Bummer

To be honest, I wasn’t really feeling this movie for its first half hour. I was impressed by the fight sequences, but the acting and storytelling left a lot to be desired. While those things are still far from perfect, I’d encourage you to stick with the film’s unconventional rhythm long enough to watch its strong conclusion. Brawler is a slow burn, but I appreciate it for being a different type of sports movie. (Really, it’s more of a family drama.)

I won’t say Sivertson is totally forgiven for I Know Who Killed Me, but this is a start.