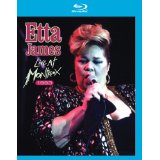 The voice of Etta James — specifically on her rendition of “At Last” — has launched 1,000 wedding receptions. The singer, who passed away earlier this year, also had a long history with the prestigious Montreux Jazz Festival in Switzerland. Though this Blu-ray includes performances from the 1970s and 1980s, the focus is on her 1993 show, which came the same year James was inducted into the Rock and Roll Hall of Fame and followed a late ‘80s comeback from drug and alcohol addiction.

The concert doesn’t waste any time jumping right into the music. Unfortunately, we have to endure two instrumental tracks — and approximately 8 ½ minutes of screen time — before the star of the show takes the stage. (Appropriately, the second of those tracks is “Hold On, I’m Coming.”) At least we get to marvel at the band members’ unfortunate early ‘90s fashions — one of the trumpet players looks like Super Mario — as we wait for James to show up.

Once she does, the larger-than-life diva easily commands the room despite the fact that she spends half the concert singing while seated on a chair in the middle of the stage. The set list astutely alternates between funky numbers like “I Just Wanna Make Love to You — featuring James enthusiastically working the stage — and slow burn soul-stirrers like “I’d Rather Go Blind” and “Just One More Day.” I much preferred listening to the love songs that showcased James’ voice and, quite frankly, allowed her to show off a bit. My favorite trick is when she moves the microphone far enough from her face to allow her un-amplified voice to fill the room.

Eventually, even the funky song/slow song formula becomes a bit predictable. On top of that, an Etta James concert isn’t exactly the most electrifying live spectacle anyone’s ever seen. The presentation of the concert — unimaginative and repetitive camera angles — doesn’t do much to make this a dynamic home viewing experience.

Fortunately, the 1993 show clocks in at a relatively breezy 64 minutes. By this time in her career, James had a detectable rasp in her voice. But rather than detracting from her instrument, it added an exciting grit and worldliness to her soul-stirring music.

Though James was still in fine form in 1993, this Blu-ray also allows fans to get a glimpse of the singer closer to the prime of her career. (The 1993 concert is the main feature, but the 1975-90 shows can also be accessed in one large chunk from the main menu. You also have the option of watching each concert/song individually.)

The 1975 concert features an even more playful version of the singer telling the crowd that she was visiting Europe for the first time and asking them how to say “woman” and “man” (nobody told her Switzerland has four national languages) before singing “W.O.M.A.N.” The 1977 show only features a medley of “At Last”/“Trust in Me”/“A Sunday Kind of Love.” I was disappointed to see her signature song get lumped together in a medley. Meanwhile her 1978 show consists of a cover of the Eagles’ “Take it to the Limit.”

Her 1989 concert exchanged the more psychedelic color palette of the ‘70s for a darker concert hall. The highlight of that show was an encore performance of “Sugar on the Floor”, written by Kiki Dee. The disc wraps up with a 1990 performance of “Your Good Thing is About to End”, including a crowd sing-along.

The clothes, the stage and the hair may have changed throughout the decades, but James — and her singular voice — remained the star of the show.

3. I Just Wanna Make Love to You

6. A Lover is Forever

2. Drown in My Own Tears

2. Something’s Got a Hold on Me

5. Sugar on the Floor

1. Your Good Thing is About to End

Etta James: Live at Montreux 1993 is presented in its original aspect ratio of 1.78:1. The 1975-90 shows are presented in their original aspect ratio of 1.33:1. The 1080i image is arrived at with an AVC MPEG-4 codec at an average of 25 mbps. This video presentation is a tale of two transfers. The 1993 show is presented in HD and looks every bit as good as a 2011 Santana concert Blu-ray I reviewed a few months ago. Blacks are solid and there’s a remarkable amount of detail. You’ll be able to see each bead of sweat on James’ face (which she wipes away with a monogrammed towel…awesome diva move!)

The other shows, however, are presented in standard definition and, when compared to the 1993 concert, looked like I was watching them on an old VCR. The psychedelic colors of the ‘70s are robbed of their pop and the image lacks refinement and detail. The best I can say is that the blacks in the 1980s concerts look reasonably good. It’s a shame the time wasn’t taken to restore these older shows. On the other hand, the 1993 concert is the main attraction (while the 1975-90 performances are lumped together), so it’s a bit more forgivable. I hate to do it, but I have to split the difference with my rating.

The DTS-HD Master Audio 5.1 track is excellent and impeccable throughout every time period presented on this disc. Every instrument — particularly the horn section — is present and accounted for throughout each of the speakers. The bass even seems to get lower and funkier during the 1975 show. My favorite thing about this track, however, is how it retains the slightly raw quality that differentiates a live show from an album recording. (James’ voice certainly holds up to that kind of scrutiny.) You also have the option of listening to the shows in LPCM Stereo.

Etta James: Live at Montreux 1993 gives fans a fine portrait of an artist at various points in her career. The Blu-ray sounds fantastic, but the no-frills presentation of these shows means only die-hard Etta James fans will be captivated for the combined 160-minute running time.