Posted in: Disc Reviews by Michael Durr on September 20th, 2012 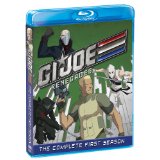 Every once in a while, we get surprises in the disc review world. I had reviewed the first volume of G.I. Joe Renegades on DVD and found it the best G.I. Joe series since the original. The cartoon only lasted a season and I secretly wished for a blu-ray of the complete season though I was pretty convinced it would never get made (and certainly not make it to my door). But lo and behold, it actually did. Furthermore, it looks impressive. Let’s take a look inside shall we?

(Some of this review is borrowed from my Season 1, Volume 1 review)

Cobra Industries is here to help the world by providing products that every man, woman and child can enjoy. They provide helpful pharmaceuticals to the world, they even bake a tasty apple pie. Cobra is so involved in the everyday activities that it is hard for anybody to imagine their lives without them. This explains why they are the perfect corporation to house a lot of secrets and have a very heavily armed security force. The more you know (rainbow flies across the screen).

Meanwhile, we join a military based where Sergeant “Duke” Conrad Hauser is being introduced to his new team of soldiers. They include Corporal Marvin “Roadblock” Hinton, a mechanic and heavy weapons expert as well as Nicky “Tunnel Rat” Lee, a medic and bomb disposal expert. In addition, they have a new private named Wallace Weems who is a very handy paratrooper (and responsible for the nicknames of the group). The four also have a female in their midst, Shana “Scarlett” O’Hara, a military intelligence officer.

Incidentally, Scarlett dubs Wallace as “Ripcord” shortly after that and the name sticks. The first mission for the group is to visit one of Cobra’s pharmaceutical plants. However, once they get there, the group of soliders is informed that this is a spy mission and they need to uncover some of the secrets that the military believes is going on. This does not go as well as planned however when they find themselves on the opposite end of laser fire. However, it appears that Scarlett does have a very powerful friend by the name of Snake Eyes.

The team is able to survive the volley and as they stride deeper into the plant. There they will find a scientist by the name of Brian Bender (Dr. Mindbender) who turns a series of Bio-Monsters (think giant goop monsters) against them. Again, the team survives but not without a casualty. The rest of the team now find themselves labeled and framed as renegades. They are on the run with their lives and honor at stake. They not only have to fight the forces of Cobra Industries but find themselves on the defense from a group of military officers known as the Falcons. Can these ordinary joes survive?

This is certainly a different take on the classic G.I. Joe story. It used to be that G.I. Joe was a special military force and Cobra was a bunch of terrorists. That dynamic is changed almost 180 degrees which makes a lot of sense when we think of big business and corporations often controlling large faucets of our lives. They make for the perfect evil force which is shaped to be Cobra Industries. Another thing I liked was there were a lot of familiar faces on both the Joes side as well as Cobra.

On the cobra side, in addition to Mindbender, we get the Baroness, Destro, the Twins (Xamot/Tomax), Major Bludd, Storm Shadow, Cobra Commander and even one of my personal favorites, Zartan. We get to see some interesting characters on the military side too including Flint, Lady Jaye and Wild Bill (think helicopter pilot). It is really a great cast when you think about it and it creates a nice continuing story, something that was missing a lot of the time during the original show. It isn’t just one battle after another, we get developing plot lines and it is very refreshing.

In addition, it should be mentioned that I really like the idea of a team of joes against the world. As I watch this show, I start to wonder if I am watching a cartoon that mixed G.I. Joe and the A-Team. It bears some resemblance for sure. I was half expecting Duke to smoke a cigar (if it was actually PC to see in cartoons these days) and talk about how he loves when a plan comes together. Also, if Roadblock isn’t a spitting image of B.A. Baracus, I do not know what is.

The video is in 1.78 Widescreen presentation in 1080P. The style is comparable to recent superhero cartoons and is mostly 2-d animation with an occasional splash of something in pure CGI to emphasize a certain scene. All of the characters look pretty good with the exception of Duke who was a little too much on the anime side. Scenery is usually well done and locales appeared different from each other rather than attempting the same color palette every time.

For the audio portion, we get a 5.1 English DTS-HD track (2.0 PCM Stereo track also included). The dvd was already pretty darn impressive, and the jump to lossless audio is even more noticeable in pure power. Dialog is crystal clear and sound effects have reached the level of a medium budget action flic that spent a lot of money on the flashy surrounds. Bullets pierce, punches fly and plenty of stuff blows up. Seriously, I have a hard time believing that the next live action G.I. Joe will even compare.

As mentioned in my first review, there are no plans for future episodes of G.I. Joe Renegades which is really a shame. It’s a darn good series, seriously it made me actually like G.I. Joe for the first time in a couple of decades (well the first live action film was not too bad either). Now it is available in spectacular blu-ray and this becomes a fitting memento that hopefully gets a cult following and maybe a comeback on a different network at the very least.

This is another solid outing for Shout Factory with superb production on 1080p video and DTS-HD audio. The extras are not overwhelming but they are a very good compliment with strong commentaries and a couple of heartfelt commentary. I probably sound like a fanboy to some extent but I can not recommend this set enough. Hopefully, Shout Factory decides to do more blu-rays of animated shows, this one shows that they are a great value with plenty of meaty content. Enjoy.

Michael Durr has been reviewing movies for the better part of fifteen years now. He primarily enjoys thrillers, sci-fi, animation and even a little courtroom drama. His favorite films include Escape from New York, the Goonies and anything with Alyssa Milano. When he’s not praising Kurt Russell as the greatest actor of our time or scratching his head over a David Lynch flick, he’s spending time at home in Texas with his lovely wife, Lori and his amazing son. How they put up with him is a mystery, but even Basil Rathbone doesn’t have the time to solve that one.
Brawler (Blu-ray) House at the End of the Street