Posted in: Disc Reviews by Brent Lorentson on October 1st, 2012 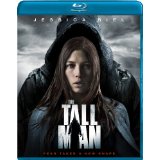 “800,000 children are reported missing each year in the USA.  Most are found within a few days.  1000 children disappear without leaving a trace.”

After seeing Pascal Laugier’s first film Martyrs, I instantly became a fan.  It’s not often I can recall the exact emotions and thoughts I felt as I emerged from a theater years after the experience.  He’s a director I also have no problem calling an artist, and I’ve patiently been waiting for him to assault my senses with his follow-up project.  There was a time he was attached to do a remake of Hellraiser.  Usually the thought of remaking such a classic would send me into an outrage, but if there was ever a director who could handle the material, I believed he’d be the perfect choice.  Sadly the production fell apart, and his follow-up became The Tall Man.

I tried to distance myself from reading about any information about the film, wanting to go in and simply sit down and enjoy whatever story he had to deliver to the screen.  But when I saw the chance to view the trailer, I couldn’t wait.  The trailer delivered the right kind of creepy awesomeness I had hoped for, and when the time came to review the Blu-ray, of course I was excited.

As a warning for those who have not seen the film, the biggest surprise the film has to offer is that it’s not actually a horror film.  Sure, we are offered up some suspenseful bits, but if you’re expecting some kind of terrifying thrill ride, you’ll be left disappointed.  Instead what Laugier has for us is a story much more grounded in reality and perhaps terrifying in a more subtle way.

The town of Cold Rock has been plagued by a dark mysterious entity.  Something evil has come to the town and has taken the children, leaving no trace behind with the exception of a few witnesses.  All the local authorities have to go on is that person responsible for taking all the children is a being known only as The Tall Man.  Parents and children are terrified expecting at any moment their young ones will be the next to vanish into the night.

When we meet Julia (Jessica Biel), the town nurse, she is treated as a bit of an outsider.  Her husband was the town doctor who everyone loved and appreciated, but when he left after the town mine shut down it seems the whole town collapsed as well.  She’s a good-natured woman with a big heart for nurturing children, but she is helpless to the town that is falling apart around her.  What keeps her together is her son David.

The film wastes no time in bringing The Tall Man into Julia’s home and taking David away from her.  She chases the hooded figure, even going so far as to leap onto the back of a truck as it’s speeding away.  Her battle to try to recover her son is relentless and leaves her more than just a little broken and bloody as she barely survives a wreck that gives The Tall Man the opportunity to make their escape with the child.

Everything about Julia’s pursuit in trying to recover her child is executed so well.  The suspense never relaxes its hold till she is broken and bloody in the center of the road.  Sadly, though, this is the only real excitement the film has to offer.

It’s after being picked up from the middle of the road by Lt. Dodd (Stephen McHattie) and taken to the town diner that Julia gets a chance to clean up and compose herself.  But it’s in the back office as she’s changing that she discovers a shrine erected, and with the shrine there is a picture of her son.  The townspeople who have gathered at the diner are eagerly waiting for Julia to emerge, but instead, realizing something is amiss, Julia makes an escape.  With Sheriff Chestnut (William B. Davis best known as the Cigarette Smoking Man from The X-Files) leading the hunt, the towns people go on a manhunt to find Julia.

It’s at this point we are hit with a rather clever twist, and we are led to believe that possibly Julia may not even be the mother of David after all, and could she possibly be the one kidnapping all the children?  Things simply fall apart for Julia as the town is in an uproar and out for blood, wanting to know what happened to all the missing children.  While in custody Julia shuts down, leaving the Sheriff and officials desperate to find answers.

What Jessica Biel brings to this film is certainly her best performance to date.  At times we’re left feeling an array of emotions towards this woman; is she a hero, or is she a monster?  This is a question you won’t quite know the answer to till after the credits roll and you make the decision for yourself.

Though this isn’t a traditional horror film, it is so cleverly written and crafted that Laugier has managed to release yet another film that makes the viewer feel something.  As the final words are spoken in the film, I was hit by the impact what I had seen.  It’s safe to say for a while I don’t know if I’ll be able to view a missing persons case on Nancy Grace the same way.

The Tall Man is presented in its original aspect ratio of 2.40:1.  The 1080p image is arrived at with a VC-1 MPEG-4 codec at an average of 17 mbps.  In this beautiful transfer we get clear detail captured throughout.  With the cold, wet environment the colors are well captured to help give the viewer the sense of despair the town of Cold Rock is feeling.  The separation of the blacks in the night shots is impressive.  The transfer makes it so easy to appreciate the atmosphere the filmmakers intended to immerse us in.

The DTS-HD Master Audio 5.1 track is a thing of beauty with this release.  The dialog is clear, and the score is simply haunting as it comes through the speakers as you view sweeping landscapes.  The sound design throughout is brilliant, whether it’s during the scenes chase scene in the first act of the film or ambiance through the quiet creepier scenes.  Just a beautiful track that helps give you the willies when playing this late at night.

This is a relatively barebones release, which is sad; would have been nice to get a commentary or at least some behind-the-scenes footage.

Deleted Scene: (3:58) The one scene we get is a confrontation Biel has with The Tall Man inside the barn when she was trying to rescue him in the early portion of the film.

Visual Concepts:  A variety of storyboards done before filming, giving a glimpse at what the director had in mind when bringing the film to life.

Though it’s not perfect, it’s still a fun little movie with plenty of twists and beautiful visuals to keep me interested, but it still left me wanting a little more.

Brent Lorentson is a horror writer and film critic based out of Tampa, Florida. With a BA in Digital Film, he co-wrote and co-directed Scavenger Hunt. His short stories have appeared in various horror anthologies. In 2019 his short script Fertile Blood will be a part of the anthology horror film Slumber Party. He is currently working on his first novel A Dark and Secret Place set to be released in late 2019. Favorite Films: Taxi Driver, Fight Club, I Saw the Devil, The Wild Bunch, Dawn of the Dead, A Clockwork Orange, Pulp Fiction, Heathers, The Monster Squad, and High Fidelity.
CSI: Crime Scene Investigation – The 12th Season “31 Nights Of Terror” Win Strippers vs. Werewolves from Well Go USA