Posted in: Disc Reviews by Gino Sassani on October 6th, 2012 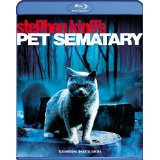 From the rather twisted mind of Stephen King, Pet Sematary is actually one of my favorites of his horror novels. It’s scary to think the story was never meant to be published and only offered up to finish a contract with his earlier publisher. As has been the Stephen King plague at nearly every turn, something ends up lost in the translation. In the novel, the deeper subtexts that King is so adept at take several hundred pages to set up and ultimately pay off. Unfortunately a mere couple of hours of celluloid never …seem to scratch the graveyard surface soil. Pet Sematary is, sadly, a definitive example. While the original work taunts us with its mystic undertones that always seem far more believable than they ought to be, the film lays down a path as overgrown as the one leading to the titular graveyard. At first the two works are not so convergent, and a great deal of hope is to be had. Soon, however, the movie descends into the typical shock horror film so common in recent years. Startles and zombies begin to dominate the experience, while the story’s deeper and far more frightening elements lie as dead as the bones of the neighborhood pets.

The plot points are pretty faithful to the King work. For ages the kids in this suburban Maine neighborhood have been burying the remains of their beloved pets, often victims of a dangerous road, in the barren soil of the local Pet Sematary, misspelled by the countless kids who christened the field untold years ago. But beyond the pet graveyard is a more mysterious and foreboding place. It was here that Indians brought the dead back to life. Our unfortunate family is about to discover that perhaps “dead is better”.

The location and set design of the film are quite good and loaded with eerie potential. King’s own adaptation of the story also contains many fine moments. The acting is a great liability to the film. Denise Crosby has about as much acting chops as the cat corpse lying frozen in the morning frost. She must have worked cheap. At least I hope so. Dale Midkiff is only marginally better as the lead who must learn firsthand the consequences of his actions. The only true standout is Fred Gwynne. Forever Herman Munster in our hearts, Gwynne shows considerable range as neighbor Jud who exposes the family to the unholy ground. It’s a bittersweet performance, as it’s not hard to see he was getting up there and wouldn’t be around much longer. He eventually died just over three years later in 1993. King makes his Hitchcockian cameo as a funeral preacher.

Pet Sematary is presented in its original aspect ratio of 1.85:1. The 1080p image is arrived at with an AVC MPEG-4 codec at an average 30 mbps. The print is a good deal cleaner than the DVD was. The grain looks much more natural, and the colors are marginally better. The image still appears soft and a bit washed out. Black levels could be a good deal better with rather poor shadow definition.

There are several moments that simply cry out for a more aggressive mix, such as when Rachel is haunted by the cries of her deceased sister. Instead, we’re treated to a few thunderclaps to satisfy the usage of rear speakers. Sub is almost not used at all. Dialog is usually clean, but there are moments when something gets muddled and you might need to retrace a line or two. The score’s a typical uninspired 80’s horror affair, but at least reproduced with fine results.

There is an audio commentary with director Mary Lambert. There are too many moments of awkward silence and a lot of gee-whiz moments. She seemed obsessed with keeping blood away from the child actors. That’s nice.

Stephen King Territory: (13:09) King takes us on a personal tour of the locations used in the film. As I’ve mentioned they are impressive, and it’s a hoot to watch King walk among the sets, waxing a bit about the film and story. We also learn the story was based on some events that King’s family experienced.

The Characters: (12:51) This is a look at the roles in the film and the people who play them. Obviously I’m not too impressed with much of the cast, and Mary Lambert just gushes over everyone.

Filming The Horror: (10:20) In case you weren’t paying attention, we’re reminded that Pet Sematary is indeed a horror movie. Glad they cleared that up for me. Imagine acting in a film where Stephen King lazes about reading aloud from the local obit pages. We also get the impression that Lambert might have been in a little over her head.

The disc has the coolest 3D cover I’ve ever seen.

It’s probably unfair to judge the film against the novel. All King works suffer this fate, and this isn’t a bad horror film at all. The child actors are actually pretty good as long as the girl isn’t trying to cry. The Maine locations which King insisted upon before selling the film rights were the best decision of the process. These places create a nice atmosphere for this particular play to unfold. In spite of the shortcomings this is the same superb tale. “Well, almost the same.”

Gino Sassani is a member of the Southeastern Film Critic's Association (SEFCA). He is a film and television critic based in Tampa, Florida. He's also the Senior Editor here at Upcomingdiscs. Gino started reviewing films in the early 1990's as a segment of his local television show Focus. He's an award-winning recording artist for Omega Records. Gino is currently working on his 8th album Merchants & Mercenaries. Gino took over Upcomingdiscs Dec 1, 2008. He works out of a home theater he calls The Reel World. Favorite films: The Godfather, The Godfather Part II, The Body Snatcher (Val Lewton film with Karloff and Lugosi, not the pod people film), Unforgiven, Gladiator, The Lion King, Jaws, Son Of Frankenstein, The Good, The Bad And The Ugly, and Monsters, Inc.
Hart of Dixie – The Complete First Season Contest: Win Dance Moms: Season 1 From Lifetime