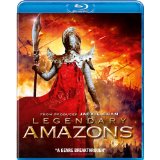 Ever wonder what a martial arts epic directed by Baz “Moulin Rouge” Luhrmann would look like? Me neither. But that’s pretty much what we get with Legendary Amazons, (loosely) based on the exploits of the Yang family during the Song Dynasty. The story has an intriguing hook — the men of the Yang clan are massacred in battle, leaving their women to throw on armor and take to the battlefield — but is ultimately bogged down by its cartoonish tone and embarrassingly bad production values.

For the cartoonish tone, we can probably thank/blame producer Jackie Chan since the Hong Kong superstar has crafted a wildly successful career out of injecting comedy into the martial arts genre. (Legendary Amazons even has Chan’s signature bloopers during the end credits; although the actress who fell off a horse and hit the ground hard didn’t seem to be laughing.)

The idea — and it wasn’t a bad one — was to inject some silliness into the typically stuffy Chinese historical epic. The problem is this film remains disappointingly tethered to its “serious war drama/love story” roots instead of going deliriously over the top. (See, Shaolin Soccer.) An awesomely ridiculous bit involving a “human bridge” is the closest the movie comes to achieving this sort of insanity. (I could’ve done without the pogo stick battle toward the end.) It seems to me the filmmakers would’ve been better off making an original, straight-up spoof of historical films rather than tossing a bunch of caricatures and shoddy wire work into a real-life story.

For the embarrassingly bad production values, we can blame…well, there’s really no excuse when you have, arguably, the most successful Asian superstar of all time backing your film. Director Frankie Chan (no relation) is best known as a film composer and hadn’t directed a movie since 2000, but he was handed the reigns to Legen — wait for it — dary Amazons, so I suppose that’s a good place to start. (Then again, Jackie Chan presumably had a hand in choosing Frankie.)

We’re talking terrible effects — it would be an insult to call them “special” — and a startling lack of ability to meld outdoor location shots with material filmed in front of a green screen during battle sequences. (The script and staging of the battle sequences are both incoherent messes.) Of course, most of this wouldn’t matter if the fights themselves were fantastic. The martial arts in the film favor a dancer-ly rhythm rather than cold efficiency and feature a few inspired moments, particularly during the boss fight at the end. Unfortunately, most of the fights don’t last long enough to leave an impression.

The cast is filled with appealing actors who are utterly atrocious in this movie. Cecilia Cheung stars as Mu Guiying, who is notified along with all the women in the Yang clan that her husband Zongbao (Richie Ren) has been killed in battle. Zongbao was the last man standing in the Yang family, but his son Wenguang (Xiao Mingyu) has just turned 18 and is tasked with leading a badly outnumbered army against Western Xia forces. Not willing to let her son face certain death, Mu Guiying joins forces with all the other widows, mothers and daughters to go into battle. Fortunately, all of the women were introduced by name and preferred weapon during the opening credits, so we know they can conveniently fight.

That ridiculousness aside, the worst part about the acting is the jarring, soap opera-style histrionics favored by most everyone in the cast. Cheung, in her first big-time action role, is career-threateningly bad as the supposed legendary leader and celebrated warrior Mu Guying. In contrast, the over-the-top performances in something like Moulin Rouge were rooted in big emotions. In Legendary Amazons, everyone just looks like a clown. A couple of actors — most notably Cheng Pei Pei as the grand matriarch of the Yang family — do manage to sneak in some subtle work. (I haven’t even mentioned how Mu Guying appears to be roughly the same age as Wenguang, her son.)

The only saving graces in this 108-minute film are the unintentional comedy factor (off the charts) and the fact that at least it’s not boring.

Legendary Amazons is presented in an aspect ratio of 2.35:1. The 1080p image is arrived at with an AVC MPEG-4 codec at an average of 23 mbps. You can probably tell from my main review that this film wasn’t exactly going for gritty realism. As a result, the video transfer favors oversaturated colors that pop brilliantly off the screen, especially when it comes to the costumes. Unfortunately, the image has been (intentionally?) smoothed down to the point that every actor’s face has an artificial sheen. In fact, the video transfer may be too sharp for its own good because it occasionally gives us a really good look at how bad the effects for this film are. (But that’s the director’s fault, not the Blu-ray.)

The Mandarin DTS-HD Master Audio 5.1 track showcases the strong score by Roc Chen. Dialogue comes through clearly, adequately and at consistent levels. I was, however, disappointed by the sound presentation during the battles (especially since there were so many of them). The only thing that stood out was the subs coming to life to reproduce the thunderous charge of horses and humans. Other than that, the sound design consisted of relatively bland and homogenous sword clanging and little in the way of making us feel like we were dropped in the middle of a chaotic battle. You also have the option of listening to the film with a Dolby Digital 2.0 Stereo track in Mandarin, as well as DTS-HD Master Audio 5.1 and Dolby Digital 2.0 Stereo tracks in English.

Behind the Scenes: (54:55) There’s a disclaimer at the beginning stating, “The audio and video quality of the Behind-the-Scenes footage is not up to our normal standards, but are included for your viewing pleasure.” Oh well, at least they’re honest. Needless to say this peek behind the curtain of the Legendary Amazons shoot — featuring sporadic comments from the actors and director Frankie Chan — is presented in standard definition. Some of the comments from the cast and crew are mildly interesting, but this special feature is way too long and thoroughly skippable (unless you REALLY loved this film).

All terrible movies are not created equal. The fact is many productions simply don’t have the resources to put together an entertaining film that looks and sounds great.

The head-shakingly bad Legendary Amazons is not one of those movies, and that’s the reason I’m coming down particularly hard on this one. With the talent in front of and behind the camera (specifically Jackie Chan’s muscle), there’s no reason this movie should be as bad as it is. I like the idea of taking the piss out of self-important historical epics, but the joke ends up being on everybody involved in this film.