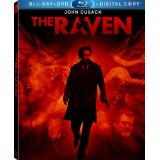 “What cannot be disputed is your imagination is the inspiration of a horrendous crime.”

The Raven may not be a turkey, but it doesn’t really soar either. Director James McTeigue (V for Vendetta) attempts to fashion a historical fiction around the mysterious final five days of Edgar Allen Poe’s life. A notorious drunk and opium addict, Poe (John Cusack) careens through 19th century Baltimore dead broke, bitter from years of writer’s block, and harassed by the locals for being a blustering has-been. Due to a distinct lack of social sympathy, he can’t even borrow money for a single drink, which forces him into an involuntary sobriety. At the same time, a rash of murders inspired from the pages of his darkest fiction terrorize the city, and he is called in by Detective Fields (Luke Evans) to assist in the investigation.

McTeigue, working from an original screenplay by Ben Livingston and Hannah Shakespeare, attempts to mix the unstoppable evil from David Fincher’s Seven with the gothic sleuthing  of Guy Richie’s Sherlock Holmes films and almost makes it work. There are clever moments in the film, mainly driven by John Cusack’s energetic performance.

Although miscast, Cusack makes the most of his role, and we find ourselves drawn in and caring about his Poe; unfortunately we never see the historical Poe who lost his struggle against his own addiction-fueled maelstrom and basically imploded in his own consumption. Instead, we get an arrogant and rather healthy-looking Poe in command of his senses, even as he laments the loss of literary inspiration and is now forced to write as a critic for the local paper. Perhaps anticipating the critical reaction to the film, there are some delicious stabs at critics and even a wonderfully grisly death involving Poe’s own worst critic, Rufus Griswold (John Warnaby).

There are some confounding leaps of logic in the investigation, as well as plenty of anachronisms. For example, the term serial killer is used in the newspaper headlines even though they didn’t coin the expression until over a century later. The film serves as a mystery, but clues are not provided to the identity of the killer until late in the movie. The pacing and action keep the story moving, but the film lacks suspense, and even though the deaths are gory, they are devoid of true horror since we only get to know one of the victims well enough to care about their fate.

The Raven is presented in its original aspect ratio of 2.40:1. The 1080p image is arrived at with an AVC MPEG-4 codec at an average 35-40 mbps. This is a strong high-definition image presentation. The print is flawless. While color is a bit washed for effect, it’s the black levels and wonderful shadow definition that really stand out here. Detail and texture add to the atmosphere created in the production. The close-ups have remarkable definition. It’s a solid presentation all the way around.

The DTS-HD Master Audio 5.1 is often a bit subtle. The surrounds are not really very aggressive or dynamic. That is not always the case, however. There are moments when a thump or a particular sound cuts through the mix with extraordinary clarity and realism. Subs are better than average. Of course, this is a dialog-driven piece, and the presentation does justice there. The score is jarring at times, perhaps a little heavy in the mix occasionally.

Deleted/Extended Scenes: (10:41) There are six with a handy play-all. There’s nothing earth-shattering here.

The Raven Guts – Bringing Death To Life: (13:32) This is the closest thing to a behind-the-scenes feature. It’s mostly talk about the characters and actors. The last few minutes deal with sets and locations.

Behind The Beauty And Horror: (2:18) Really a trailer with a few cast and crew comments.

The Madness, Misery And Mystery Of Edgar Allen Poe: (9:50) A profile/bio on the writer.

The Raven Presents John Cusack And James McTeique: (2:45) A very short sit-down between the actor and director.

Music Of The Raven – The Team: (5:10) Meet the folks behind the music. There’s some orchestra recording studio footage as well.

All in all, I enjoyed the film on a visceral level more than I should have. I was raised on Poe. My family read his poems to me as a toddler, and I was quoting them soon after I learned to talk. I found entering his world, even this fictional version, proved rewarding and intriguing, as I imagine it will for the many fans of his work. The reconstruction of his dark fiction into murder set pieces is visually stimulating even if logistically improbable. I found the end uncomfortably abrupt and the final credits title sequence obnoxious and inappropriate to the gothic sensibilities established in the film. It seems to belong in a different film altogether and rips you straight out of the mood established by the movie. It is harmless summer fluff, and I predict it will do well with audiences as long as they don’t really think too much about the narrative inconsistencies or the logic loopholes.