Posted in: Disc Reviews by Gino Sassani on October 17th, 2012 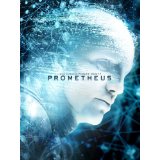 It was the tagline that brought us by the droves into our neighborhood cinemas in 1979 to see one of Ridley Scott’s two classic science fiction adventures. Alien was one of the scariest science fiction films we’ve ever seen. It wasn’t just the wonderfully organic H.R. Giger designs that had us on the edge of our seats. Scott delivered a claustrophobic nightmare that caged us with this remarkable killing machine. Much the same feeling I had recently trapped in a minivan with a large spider on the prowl. It was an instant classic and holds up just as well today. It was, of course, followed by one worthy sequel and another two that I choose to pretend never happened. More recently, the franchise was paired with the Predator universe for another two films, the second of which was actually a pretty good film. Still it has been with bated breath that many of us were waiting for Ridley Scott to return to these classic roots and scare us all over again. The result of that 30 + year wait is Prometheus.

The original film included a tour through a derelict alien craft where our unfortunate astronauts discover the alien eggs. On the way to that chamber they passed what has commonly been referred to as the “Space Jockey”. It was a rather large being in a chair at the controls of what looked like a huge weapon. No explanation was ever offered, and I was always intrigued about “his” story. 30 years later Ridley Scott decided to share that back-story with us….or not.

Prometheus was always billed as a prequel, of sorts, to Alien. We were warned up front that the film merely took place in that universe and was not going to really feature the same creature. Early leaked shots from the film quickly revealed the familiar horseshoe shape of the derelict ship which contained our “Space Jockey”. Finally, we were going to find out who and what that thing was. But it’s true. God doesn’t build in straight lines, and neither does Ridley Scott, it appears. Yes, there will be some revelations as to who “they” were, but you’re not really going to get those answers from 30 years ago. In fact, prepare yourself for more new questions than answers. That’s right. Scott is setting himself up for a sequel, or is that a prequel part II?

It’s the late 2080’s, and a scientific expedition has uncovered some rather fascinating cave drawings that date back earlier than it was originally believed there were men at all. Dr. Elizabeth Shaw (Rapace) and her partner Charlie (Marshall-Green) have made some rather startling conclusions from these paintings. They believe the images tell the story of an alien race they call the Engineers, who came to Earth long ago and seeded the planet with the DNA which would eventually lead to the evolution of humans. They now believe they know exactly where those beings came from. That’s where Peter Weyland (Pearce) and his deep pockets Weyland Corporation come into the picture. The pair has convinced him to fund an expedition to meet our makers, if you will.

Jump to almost three years later, and the crew is just about to wake from hyper-sleep. The ship, the Prometheus, has been cared for by David (Fassbender) who has used the time to study humanity through things like movies. The first to awaken is the expedition commander Meredith Vickers (Theron). Other crew members include Janek (Elba), the cowardly Fifield (Harris), Milburn (Spall) and Chance (Elliott). They discover a nearly habitable moon and a pyramid structure that indicates intelligent design. But the Engineers appear to be long gone. Yet something “lives”, and here lies the twists and turns of the story.

There’s no question that Prometheus is influenced more by Kubrick’s 2001 A Space Odyssey than the original Alien. The film explores very much the same ground. The idea of meeting our creators out in the vastness of space is a philosophical idea that Scott latches onto here and attempts to bring the entire film to that higher level of mystery and thought-provoking theology. Let’s not forget that one of the screenwriters here is Damon Lindelof, who trudged the same kind of metaphysical and enigmatic ground on the television series Lost. The influence of that kind of wonder, the “why are we here” syndrome, is prevalent in every frame of Prometheus. The action in the film is completely secondary, which isn’t to say that there isn’t plenty of it.

The tech here is very much reminiscent of the vehicles and craft that James Cameron often employs. It’s not so futuristic that things are unrecognizable, but there’s enough advancement to make you believe they could have made this journey. There is a notable exception. A self-service surgical machine is the center of the most absurd moment I’ve seen in a long time. I’m trying not to reveal too much here. Suffice it to say that it’s absolutely ridiculous in any century where the human body is still the human body.

The set pieces are quite impressive. The production design gives us just enough of that Giger look that we’re expecting. Yet it builds an entirely new look for the film as well. The Prometheus itself isn’t all that impressive, and neither are the aliens, for that matter. But the inside of the pyramid and alien craft are nothing short of breathtaking. There are many spectacular chambers inside the building. One of the sets includes a huge human head sculpture that dominates the room. There are objects much like the alien eggs from the earlier films. These are actually vats filled with a mysterious murky black fluid that reminds me of the tar monster that got Lt. Yar in Star Trek: The Next Generation. It’s actually quite nice the way a simple fluid can appear so sinister. I wouldn’t touch the stuff, but of course, you know somebody will. It is here that you meet the ancestors of the familiar alien. That evolution will progress throughout the film, but again that’s not the real central story here. It leads to a rather sweet and brief payoff somewhere toward the rear of the film.

The actors are more of a mixed bag. There is no question that Michael Fassbender steals the movie as David. From the moment we first meet him with an obvious 2001 homage to the end of the film, he delivers the most compelling performance in the cast. Guy Pearce isn’t even recognizable under huge age prosthethics as Peter Weyland. I seriously question the choice. Why not find a more age-appropriate actor to fill the role? Wasn’t Christopher Lee available? Wouldn’t that have been nice? Noomi Rapace is a little over her head taking the lead as Dr. Shaw. Look, I know there’s an unfair tendency to compare her with Sigourney Weaver, but that’s not the problem at all. There’s just nothing dynamic about the performance at all. It’s as flat as they come. The same can’t be said for Charlize Theron. I happened to catch her twice in the same week as we also saw Snow White And The Huntsman. In both films she carries an authoritive presence that really dominates more than perhaps intended. She’s used very little here, but you’ll swear she was on screen longer than she was. It’s another memorable performance, to be sure. There are even a couple of moments when I was reminded of the Queen role. I found others in the audience had the same reaction. Fortunately, Scott knows how to surround his cast with rather colorful characters to keep the film interesting on a more basic level.

Prometheus is presented in its original aspect ratio of 2.40:1. The 1080p image is arrived at with an AVC MPEG-4 codec at an average 35+ mbps. The high-definition image presentation reflects the huge budget and solid production design for the film. You can always count on Ridley Scott to deliver a visually stimulating environment. This film is no exception. We’re talking nice crisp, clean, and sharp images. Black levels are superior, offering tight shadow definition.

The DTS-HD Master Audio 7.1 is alive with those wonderful creepy sounds that fill out this kind of a production. Ooze and slime never sounded better. The score cuts through with good clarity. The dialog is always clear and upfront. The sound design is quite immersive, and I would expect nothing less from Scott and company.

There are two Audio Commentaries. The first sports writers Jon Spaiht and Damon Lindelof while the second is a solo effort by Ridley Scott. He often talks about how eager he is to follow this film up with a sequel. Of course, his own family tragedy will have its effect on the future of things.

The features come up pretty short on this one.

Deleted/Alternate/Extended Scenes: (36:51) There are 14 in all. You get the handy play-all option and optional commentary by the f/x guys.

The Peter Weyland Files: (18:57) This one is bizarre and really pretty lame. There are four pieces with a play-all option. It’s like you’re hacked into Weyland’s computer. There’s a video call from Shaw, a commercial for Weyland’s robotics, Interviews with ship crew, and a speech delivered by the young Weyland.

This is the story of two films, in the end. There is the Alien prequel, which promises to answer 30-year-old questions. For those of us old enough, we’ve waited a long time to see this. But there are many in the audience who know alien only from home video, and long after the countless sequels and rip-off versions have become part of the popular culture. Few of us in 1979 related to Alien’s inspiration from It, The Terror From Beyond Space. So it’s no surprise to me that maybe most of the fans will be judging this film as a standalone piece, and perhaps that’s the only fair way to approach it. It’s obvious that Scott has more to say. We’re left with one of the most blatant sequel setups I’ve ever seen. And for you Alien fans out there, your answer is also yet to come.  I don’t believe this is the ship that the Nostromo found in 1979. It’s merely from the same race. With a new Bladerunner, a Moses bio-pic, and one other film already on Scott’s upcoming slate, we’re all going to have to wait quite a long time for those answers, both old and new. That’s even more true since the suicide of Tony Scott. So it’s not so much what I thought of the film. From which camp are you approaching Prometheus? “Everyone has their own way.”

Gino Sassani is a member of the Southeastern Film Critic's Association (SEFCA). He is a film and television critic based in Tampa, Florida. He's also the Senior Editor here at Upcomingdiscs. Gino started reviewing films in the early 1990's as a segment of his local television show Focus. He's an award-winning recording artist for Omega Records. Gino is currently working on his 8th album Merchants & Mercenaries. Gino took over Upcomingdiscs Dec 1, 2008. He works out of a home theater he calls The Reel World. Favorite films: The Godfather, The Godfather Part II, The Body Snatcher (Val Lewton film with Karloff and Lugosi, not the pod people film), Unforgiven, Gladiator, The Lion King, Jaws, Son Of Frankenstein, The Good, The Bad And The Ugly, and Monsters, Inc.
Madagascar 3: Europe’s Most Wanted (Blu-ray) “31 Nights Of Terror” The Raven (Blu-ray)