Posted in: Disc Reviews by Gino Sassani on November 16th, 2012 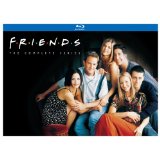 “So no one told you life was gonna be this way. Your job’s a joke, you’re broke, your love life’s D O A. It’s like you’re always stuck in second gear. When it hasn’t been your day, your week ,your month or even your year. But I’ll be there for you…”

If you sit down and really think about it, as far as sitcoms are concerned, Friends is very above-average when you consider what the television landscape has been littered with the last decade or so save for a few really good shows. The show is cleverly written, the actors have great delivery, and the characters are generally likeable. The first few seasons, under the direction of James Burrows, a master of ensemble casts (Frasier, Cheers and Taxi to name just a few), allowed the actors to hone their comedic timing and skills, as well as develop the proficiency necessary to work in a dynamic that contains multiple “stars”.

The “friends” I’m discussing, if you didn’t already know, are a veritable Long Island brat pack and our first introduction to them, in The One Where It All Began, finds them at their favorite meeting place – the Central Perk coffeehouse. Monica (Courtney Cox Arquette) is in charge of an ongoing bull session with the others in the group as they discuss everything from their employment to their ever-changing love life. Ross (David Schwimmer), Monica’s brother and a paleontologist, is bemoaning the fact that his wife left him for another woman when all of a sudden, Rachel (Jennifer Anniston), a spoiled and pampered brat from Long Island and old high-school friend of Monica’s, busts in on the group in a wedding dress and informs everyone within earshot that she has just left her fiancé at the altar. Other members of this small fraternity include unrelenting jokester, Chandler (Matthew Perry); Phoebe (Lisa Kudrow), a former teenage runaway with an excessive bit of air between her ears; and Joey (Matt LeBlanc), a local actor who is constantly getting himself into odd and unbelievable situations. From that first episode the show dominated the time slot and the office water cooler conversations. They would grow together and discover together. Ten years later the show ended still on top, going out on its own terms.

There has been a lot of discussion as to why the show was so popular. In fact for the first few episodes ratings were down and there was some danger of early cancellation. Of course, that didn’t happen, and NBC’s patience obviously paid off big for everyone involved. The real secret can be found in the chemistry that the cast developed. Pilot director James Burrows understood that before anyone else. He took the cast to Vegas before the pilot started shooting. He gave them some walking around cash and let them bond. Who knows how much of a difference that made. My bet is that it was huge. Egos never got in the way and all six cast members remained for the entire 10-year run. That’s rather unique in itself.

With 236 episodes to choose from everyone has their favorites, and it would be impossible to make any kind of a fair list here of memorable episodes. You have all of them to choose from.

Now Warner Brothers has done the unthinkable. They’ve released the entire series on high-definition Blu-ray. They weren’t content to merely give fans the series in one HD set. That wouldn’t do for the faithful followers of this sit-com. It was no ordinary show and this is no ordinary release. While the show was mostly released in full frame formats to mimic the broadcast presentations Warner went above and beyond the call of duty. Every episode has been re-mastered from the 35mm original negatives but it has also been expanded to widescreen format. You may be an expert on Friends, but you’ve never seen this show like this before.

There is a brewing controversy I feel the need to address here. Many people have already noticed that this set does not include the extended versions from the DVD releases. It is causing many to feel ripped off. Don’t. Here’s the deal. That extra footage exists mostly in video footage that simply can not be upgraded to respectable high definition. What you get instead is a lot better. You get those widescreen versions that have not really been available before. If you really are a fan of the show, you’ve got that extra minute or two on your DVD’s. Fine. Keep them. What you don’t have are these widescreen impressive high-definition images. It’s more than a fair tradeoff.

Each episode is presented in a brand new aspect ratio of 1.78:1. The 1080p image is arrived at with an AVC MPEG-4 codec at an average 30 mbps. The DVD’s were full frame. For fans of the show this is huge. You not only get stunning high-definition image presentations, but you get to see the show in a way never before possible. These images were re-mastered from original 35mm negatives and it shows. Colors are bright and cheerful. Sharpness and texture allow you to see details you could not before. It’s like someone went back in time and brought your Friends into the world of today’s advanced picture and sound.

The Dolby Digital 5.1 is pretty much there to service the dialog. No great breakthroughs here. It is a pristine audio presentation that allows you to hear everything crystal clear.

The DVD extras are all ported over and remain in Standard Definition. There is a 21st disc that brings you brand new features.

True Friends Documentaries is a three-part feature that examines the show from beginning to end.

Friends From The Start: (27:50) HD The story begins…where else, but at the beginning. Creators David Crane and Marta Kaufman join many other cast and crew members as we go back to before the show ever aired. Here you learn the creation story and plenty of tid-bits that lead to the show’s first episode.

When Friends Become Family: (29:20) HD The story continues with a look at how the show evolved. Here we look at the characters more closely and examine why the show became such a hit. Guest stars get to give their two cents here as well.

The Legacy Of Friends: (10:46) HD It all wraps up with a look at filming the last episode and the emotional ride for cast and crew.

Production Cut Of The One Where Rachel Tells Ross: Just before 9/11 there was an episode filed where Chandler jokes about a bomb while going through airport security. Just before the episode aired 9/11 happened and, of course, the show was altered. Now that episode is presented as originally planned. There’s also a script for the episode you can read.

There are two talk show visits after the finale aired.

Gag Reel: (7:01) SD Here you’ll find gag material not on the DVD gag reels. Much of it is from the last episode and shows the emotional reactions.

The best part of this release is the hope it offers others with favorite shows that might now get this kind of treatment. There aren’t as many that were as successful as Friends, but there are a few notable shows like Seinfeld. This is also a great opportunity for those who might have missed out on the show when it was on the air. If that’s the case then “there’s someone I want you to meet”.

Parts of this review were contributed by David Williams.

Gino Sassani is a member of the Southeastern Film Critic's Association (SEFCA). He is a film and television critic based in Tampa, Florida. He's also the Senior Editor here at Upcomingdiscs. Gino started reviewing films in the early 1990's as a segment of his local television show Focus. He's an award-winning recording artist for Omega Records. Gino is currently working on his 8th album Merchants & Mercenaries. Gino took over Upcomingdiscs Dec 1, 2008. He works out of a home theater he calls The Reel World. Favorite films: The Godfather, The Godfather Part II, The Body Snatcher (Val Lewton film with Karloff and Lugosi, not the pod people film), Unforgiven, Gladiator, The Lion King, Jaws, Son Of Frankenstein, The Good, The Bad And The Ugly, and Monsters, Inc.
The Day (Blu-ray) Lincoln